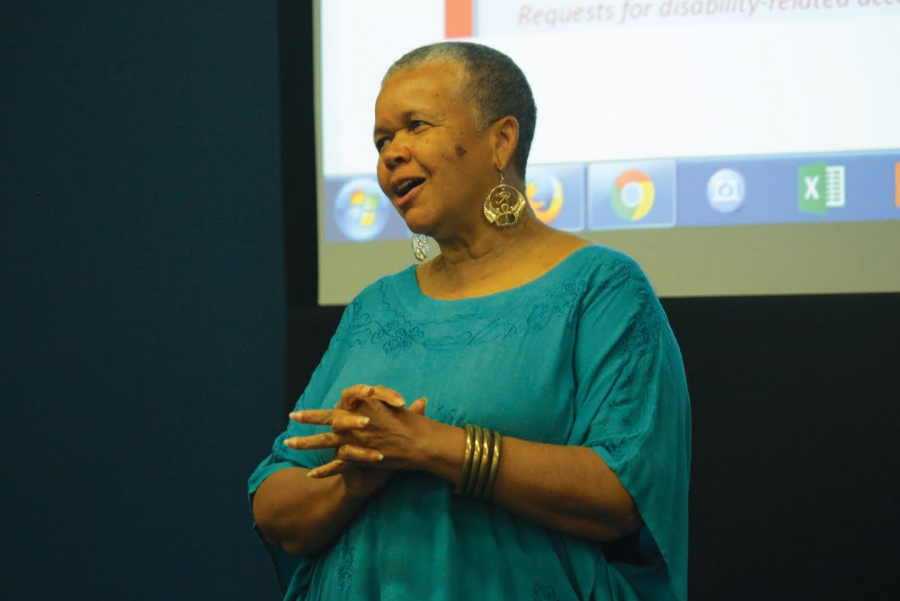 Students and community members took the opportunity to speak on a variety of topics that included racism, acceptance, self-love, pain, and love at a San Diego Mesa College event .

On Feb. 21 San Diego Mesa College hosted OPEN MIC: POETS SPEAK OUT an event that invited students and community members to perform spoken word or poems in front of a live audience.

Over a dozen individuals graced the stage with performances of either art of their own or a piece of their favorite literature. The event was coordinated by the following San Diego Mesa College faculty members: Mesa College Counselor Dr. Judy Sundayo, Professor Emerita Starla Lewis, and Black Studies Department Chair Thekima D. Mayasa.

When asked what she aims to accomplish by hosting OPEN MIC, Sundayo stated “I believe it’s important to do open mic for students, so that students’ stories and their voices can be heard. It’s a wonderful opportunity to express feelings, thoughts, ideas, and opinions in a safe space.” The event indeed served as a safe place for students to embrace and share their creativity. It definitely made an impact on one of the student performers, Jade Robinson, who after the event stated “Things like this inspire me, like I’ll probably go home and write a new piece.”

Robinson began writing poetry over a year ago. She shared that a lot of her inspiration to write comes from admiring the work of other local artists. However, it is her counselor, Dr. Sundayo, who encourages her to share her work.

Robinson took the open mic opportunity to perform a self-written poem titled “Drowning in my Thoughts,” a passionate poem that discussed the battles she encounters within herself, and how those battles have shaped her into the woman she has become today. Robinson spoke a lot about self- empowerment, love, and acceptance. Her words made her confidence feel as if it was contagious.

Student and musician Derric Mckinnie also took the opportunity to express himself by addressing the “black father” stereotype that is present in today’s society. Mckinnie shared a poem he had written about his personal relationship with his own father. Mckinnie used his words to take a powerful stance on how he refuses to let the situation define him.

Mckinnie expressed that he is “looking at every day as an opportunity to better my life.” He began writing poetry at the age of 13 and now at the age of 21 he still feels as if it’s therapeutic or a “helper though life.” His appreciation for the art of poetry is surely displayed through his work. He delivered a strong message with a flow so smooth the audience could have clapped along to it.

Mayasa,  Lewis, and Sundayo believe it is very important for events similar to these to be present on campus. Mayasa stated that “If we’re cultivating leaders of tomorrow and today then they have to know what that feels like and be in a place that allows them to feel that.”

Students undeniably served as leaders that night as they led the audience through a variety of emotions. Towards the end of the event, Mayasa asked the audience to describe how the event had made them feel. Members of the audience began to shout out words like “free,” “inspired,” “open-minded,” and much more.

The students not only made an impact on the general audience but their instructors as well. Lewis herself stated that the event made her “free.” She expressed that “This is a safe place where students, faculty, people get to be who they really are. I always say that we ask children the wrong question. We always ask them who do they want to be instead of who they be. And if we ask them who they be they will tell us, and then we can support them in manifesting their dreams.” Students made it clear who they were when they bravely offered their vulnerability and genius, and in exchange they received understanding and acceptance.