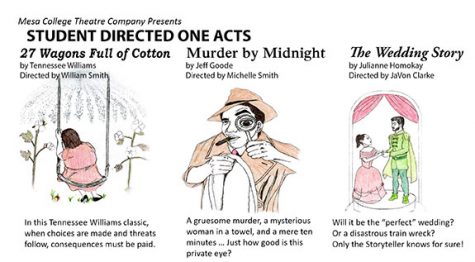 The Mesa College Theatre Company presented “27 Wagons Full of Cotton,” “The Wedding Story,” and “Murder by Midnight” at the Mesa College Apolliad Theatre on Nov.10-12. All acts were directed and performed by Mesa students.

Tennessee Williams’ “27 Wagons Full of Cotton,” directed by William Smith, had heavy historical context, but conveyed elements of rape culture still prevalent today. The act exposed an interesting cultural power dynamic through a destructive relationship between a Southern couple, Jake and Flora Meighan. After Jake burns down his rival Vicarro’s mill, Vicarro retaliates by seducing Jake’s wife. Michaela Griffin gave a chilling performance as Flora, a woman who is continually abused (physically and emotionally) by her husband and eventually raped by the rival neighbor. “Based on current events,” said Smith, “it is obvious that this play resonates just as powerfully today as when it was originally written.”

Jullianne Homokay’s “The Wedding Story,” directed by JaVon Clarke, picks away at the classic fairytale façade. The act began with a father reading a bedtime story to his kids. The fairytale couple took on a life of their own, however, and reclaimed their story— emphasizing realism over the perfectly curated happily-ever-after. “The Wedding Story” was humorous, relatable, and a presented a refreshing perspective on relationships and the reality of marriage. “Do try to be realistic in your expectations of the ones you love!!!” said Clarke.

Jeff Goode’s “Murder by Midnight,” the final one-act, was directed by Michelle Smith. Sensational and facetious, the short act focused on Dick Piston, played by Ryan Nebreja, a hotel detective trying to solve a murder. He has ten minutes on the clock before he loses the case to the day shift. “I was intrigued with the noir style and the challenge of the over-exaggerated comic elements of the piece,” said Smith.

The succession of the three different pieces highlighted the unique structure, thespian elements, and themes characteristic to each act, as well as each director’s personal style and preferences. Overall— an impressive, professional performance from the Mesa College Theatre Company.