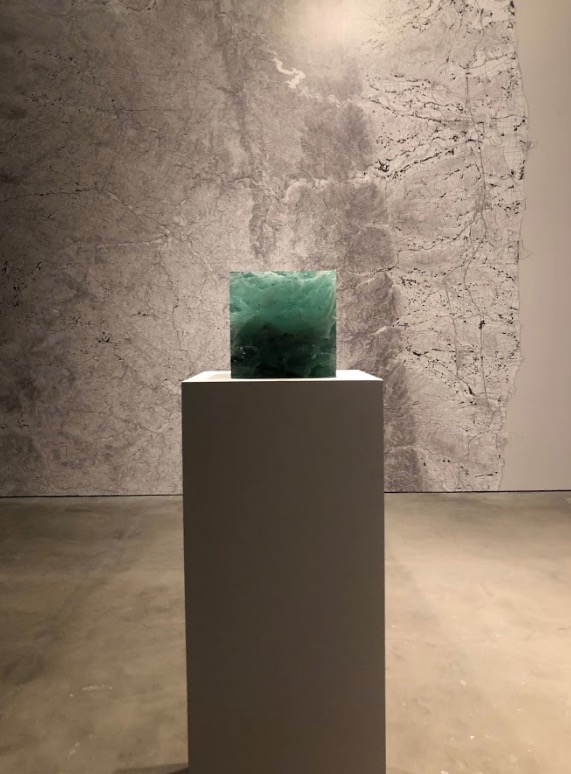 "Trinity Cube" by Trevor Paglen, 2015. Medium: Sculpture made up of trinitite and irradiated glass.

Originally exhibited at the Smithsonian American Art Museum, Paglen unveils his mixed-media exhibit in this mid-career survey, displaying the obscurity in art, science, surveillance, and the universe of telecommunication.

Paglen captures a similarity seen by American photographers such as Timothy O’Sullivan in the 1800s and Ansel Adams in the 1900s who interpreted the world through their landscape photographs. O’Sullivan and Adams have captured these scenes before but Paglen recaptures them through his own lens. In Paglen’s photographs, the importance in surveillance infrastructures is evidently displayed through his mixed-media works of various spy satellites, a tapped underwater telecommunications cable, unidentified spacecrafts, and clandestine military code names

In Paglen’s “DMSP 5B/F4 From Pyramid Lake Indian Reservation” from 2009, he recaptures O’Sullivan’s “The Pyramid and Domes, Pyramid Lake, Nevada” from 1867, but in a newer element. In a darker atmospheric perspective, the viewer witnesses stars making their journey in the same direction, but only one traveling in an opposite way. Paglen reflects that the star traveling in an opposite direction is actually a spy satellite taking pictures of Pyramid Lake.

His 2015 work on “Trinity Cube,” is made up of several different earthly phenomenons from both the U.S. and Japan. The cube is made up of irradiated glass and trininite. The irradiated glass was taken from inside of the Fukushima exclusion zone in Japan, a site from the 2011 nuclear disaster, and makes up the outer layer of the cube. The cubes inner layer is made up of trininite, a mineral created in 1945 from when the U.S. exploded the first atomic bomb in Alamogordo, New Mexico.

Paglen’s intentions through his photographs attempt to exhibit a glimpse into the technological world from an outsider’s perspective. One of his works include detailed maps of the underwater cable systems, as Paglen believes society knows little of these systems. In an interview with Maureen Cavanaugh on a KPBS Midday Editions podcast he explains, “For many many years (I’ve) been trying to see where in the world are these infrastructures? What do they look like? And if we know that they’re there? How does it transform the way we see the world around us?”

The exhibition entertains the belittling interest concerning the telecommunications world. Paglen told Cavanaugh, “It’s interesting the way we experience telecommunications systems, whether that’s the internet or email, its very abstract in the metaphors we use… But we don’t talk so much of the of the physicality of these kinds of systems.”

“Sites Unseen” opened on Friday, Feb. 22 and will continue to be displayed until June 2 of this year. The Museum of Contemporary Art San Diego allows free admission to people under the age of 25 with a valid ID card. The museum also offers “Downtown at Sundown,” which guarantees free museum admission and exhibition tours on the third Thursday of every month.