Local bookstores join together in celebration of Independent Bookstore Day 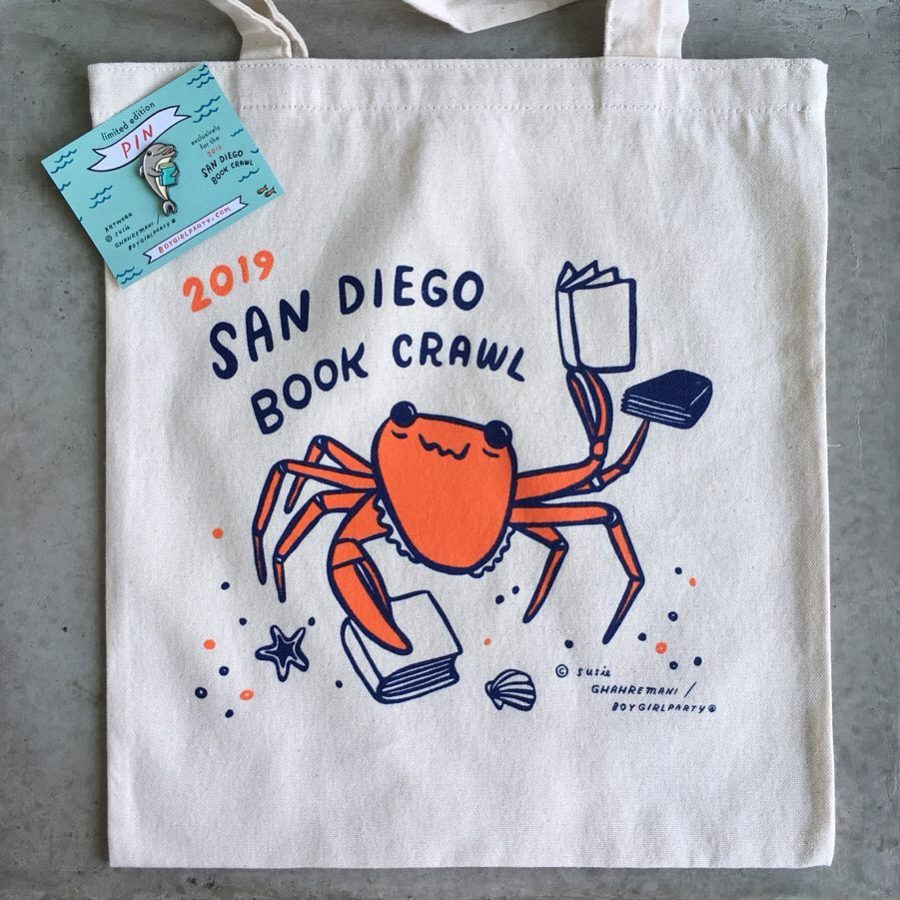 Readers who attended the San Diego Bookstore Crawl had the chance to earn a limited edition tote bag and pin, designed by artist Susie Ghahremani.

San Diego’s book-loving community celebrated Independent Bookstore Day by attending the city’s third annual bookstore crawl, in which participating local bookstores hosted their own parties over the weekend to honor the holiday.

Independent Bookstore Day, celebrated on the last Saturday in April, is an annual event that takes place at indie bookstores all across the nation. Not only do book lovers get to celebrate their passion for reading, but they also get to support brick-and-mortar bookstores and help their local community thrive.

This year, San Diego’s participating bookstores organized all kinds of festivities on April 27, such as live music, food, live readings from authors, giveaways, scavenger hunts, kid-friendly activities, and an exciting prize wheel — from which customers could win gift cards, discounts, and other gifts. Also, there were exclusive advance reader copies, limited edition book-related merchandise, and prints exclusively available in store to celebrate the holiday.

The truth is that bookstores aren’t like ordinary stores. The Indie Bookstore Day’s official website describes bookstores as “entire universes of ideas that contain the possibility of real serendipity. They are lively performance spaces and quiet places where aimless perusal is a day well spent.” Independent bookstores are even more special and unique, filled with all kinds of treasures just waiting to be discovered. Independent Bookstore Day is a holiday to honor the importance of literature and the cultural value of these extraordinary shops. The presence of actual bookstores is especially significant in this digital age because they allow readers to feed their passion, offline and in person. “In a world of tweets and algorithms and pageless digital downloads, bookstores are not a dying anachronism,” explains The Indie Bookstore Day‘s official website. “They are living, breathing organisms that continue to grow and expand. In fact, there are more of them this year than there were last year. And they are at your service.”

Independent bookstores are different in their own ways, and so each party held for the holiday is unique. The nine local bookstores that participated in the San Diego Bookstore Crawl from April 27-29 were Warwick’s, UC San Diego Bookstore, Mysterious Galaxy, Verbatim Books, The Book Catapult, Bluestocking Books, Run for Cover Bookstore, La Playa Books, and Library Shop. Warwick’s in La Jolla, for example, hosted their annual Saint Jordi’s Day festival in joint with their celebration for Independent Bookstore Day. According to the bookstore’s website, “Saint Jordi’s Day is a day of books, roses, and romance, and Warwick’s is bringing it to La Jolla all the way from Barcelona” to honor their cultural tradition. Warwick’s observes Saint Jordi’s Day to commemorate the time of year that men and women in Barcelona buy and exchange books for their loved ones.

Readers of San Diego who attended the annual SD Independent Bookstore Crawl were given a “passport” for collecting stamps from each store that they made a $5 minimum purchase from. The more stamps collected the better, and there were fun incentives to visit as many stores as possible. People who collected five stamps earned a limited edition SD Book Crawl tote bag. The exclusive tote bag displayed a lively illustration of the book crawl’s mascot, a beach crab, holding books in his claws, among seashells and starfish. The design was created by the book crawl’s official ambassador, local author and illustrator, Susie Ghahremani, who is known for her children’s books “Stack the Cats” and “Balance the Birds.”

Seven stamps in a passport earned a limited edition pin of a cheerful dolphin hugging a book, also designed by Ghahremani. With eight stamps, book crawlers earned a Silver Raffle ticket for a chance to win a curated gift basket from one of the nine participating bookstores, plus an official San Diego Festival of Books swag bag including two VIP passes to this year’s Festival of Books author panels. Dedicated bookworms who got stamps from all nine participating local bookstores were entered into the Gold Raffle, which included the Festival of Books swag bag and over $200 worth of gift certificates from all nine shops.

Every year, this holiday for bookworms is continuing to grow and is now observed at more than 550 stores in 49 states. Because of these bookstore crawls hosted by cities all over the country, book enthusiasts are able to come together and share their hobby of reading.