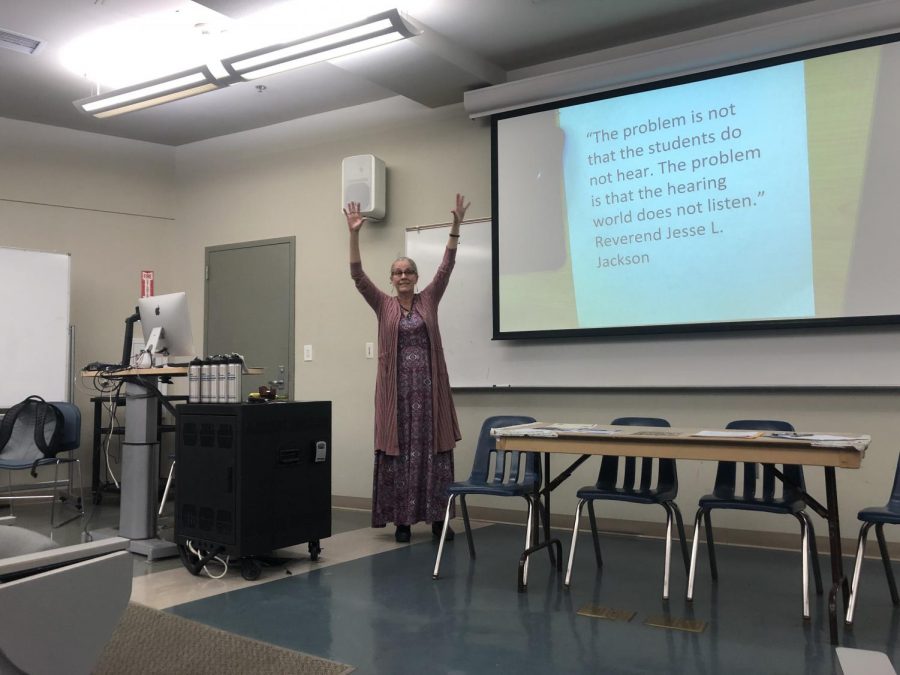 Professor Leslie Saline-Styles, along with a staff and student panel, shared the importance of the celebration of deafness through social activism on April 9 at Mesa College. Professor Styles opened the event Celebration: Deaf Social Activism with a scenario of the birth of a newborn baby who was diagnosed as deaf. Since birth, babies who are deaf are often viewed as having a problem that needs to be fixed. This misconception often leads them to grow up in a society that only sees their deafness as a limitation and not something to be celebrated.

This event was meant to highlight and remind everyone that American Sign Language, or ASL, is more than just a language. ASL is a language that brings together a community that is overlooked and underserved by the system and is in need of allies. Many of those who are interested in the language don’t inform themselves of the injustices that the deaf community faces. Professor Styles shared in her introduction that she views her students as allies. She says, “I can give you language, I can give you culture, and in return, you can advocate and be our allies.”

She shared the story of a former student who became a perfect example of an ally. After leaving Maryland to get a job at the same institute as Professor Styles at Rochester, this student later opened her own clinic. This clinic was very deaf friendly and inclusive. The staff is able to communicate through ALS with deaf patients and waiting rooms have special light systems that allow the patients to know when doctors are about to come into the room. In the eyes of Professor Styles, this is a perfect example of successful advocacy through an ally.

Another perfect example of social activism within the deaf community is Professor Styles herself. Professor Styles took part in the Deaf President Now protest movement at Gallaudet University. This university is made up of a large population of deaf students. At the time, all of the presidents elected to serve the school had been people who were able to hear.  After having enough of this hypocrisy, students began to protest in March of 1988. They went around chanting, ”Deaf President now! Deaf President Now!” After protesting for various days, the student rejoiced after finally having a president that could not only represent them but also fully understand them and their struggles.

Although the fight to be understood on a larger scale is yet to be won. Staff panelists William “Billy” Allen, Garrett Bose, Joseph Halcott, student panelist Jesse Jones, Phuong Nguyen, Kerry Knighton, Sr. and Jie Yu all shared their experience of growing deaf.

Before becoming teachers, the staff were once job-seekers. They shared their experiences of finding a job while deaf. This broad field of work quickly becomes limited the moment someone is born deaf. Professor Garrett shared, “I wanted to get involved in the entertainment industry, but I knew that that industry is very dominated by the hearing world.” They all made various attempts to turn in applications, but they knew that being turned down didn’t mean that they should stop from finding a place that would understand their needs.

Jones shared his experience of growing up with a supportive family. Unlike many, his parents looked and found ways to support their child. He can be seen as an example of the success a child can have in the future when given the help that they need. Sadly, this wasn’t the case for the rest of the student panelists. Coming from immigrant backgrounds Phuong Nguyen, Kerry Knighton, Sr. and Jie Yu found themselves in a different situation. They battled through language barriers and the pressure to “fix” themselves. With the power given to them by ASL, they were able to gain back their voice advocate themselves. They found a community that understood their struggles and gave them support.

Professor Styles and all of the panelists encouraged students to join an ASL class if it sparks their interest. Keep in mind that ASL is not only a tool to communicate but a tool to advocate for those who often go overlooked.