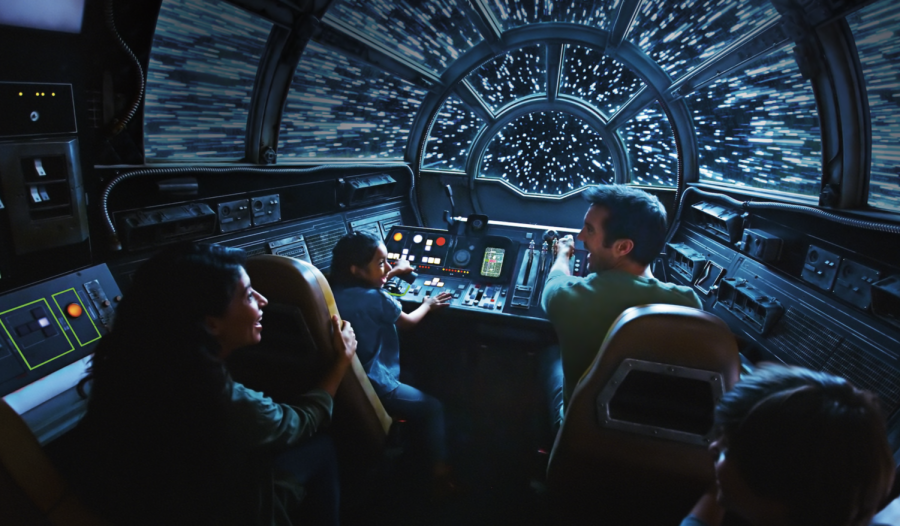 Park visitors will get the chance to fly a Millennium Flacon as they experience an interactive smuggling mission. Photo Credit: MCT Campus

If you have watched “Star Wars,” you probably thought about what it would be like to fly a Millenium Falcon, and now is your chance to find out. Star Wars: Galaxy’s Edge is a new themed area of the park and will be opening at Disneyland Park in Anaheim, California on May 31, and also at Walt Disney World in Orlando, Florida on August 29. Galaxy’s Edge has been said to have an authentic “Star Wars” feeling, according to disneyparks.disney.go.com.

With this new Star Wars land opening at the Disneyland park, the crowds will definitely increase. Wait times are already reaching as high as 100-200 minutes per ride. According to The San Diego Union-Tribune, visitors will have colored wristbands distinguishing which four-hour time window corresponds with each visitor. According to itispacked.com, Disneyland’s resolution to control crowds once Star Wars: Galaxy’s Edge opens is by blocking out dates for the annual pass holders starting June 21. This might not sit well with the many pass holders that are paying anywhere from $399-$1399 per year, according to ThemeParkInsider.com. For Southern California Select Annual Passport holders they will have blackout dates all of June through August, not allowing them to go again until Sept. 3. This takes effect starting May 31, the day Galaxy’s Edge is set to open. As of right now, reservations are required to visit Galaxy’s Edge between May 31 and June 2. Reservations are full at this time but can still park visitors may still be able to get a reservation with a hotel stay. Also, access to Galaxy’s Edge and its attractions may be unavailable due to guest demand and other factors.

Stated on the company’s website, at both Disneyland and Disney World parks there will only be one ride opening this month, Millenium Falcon: Smugglers Run. This ride will simulate flying the Millenium Falcon –  a thrilling interactive mission, according to Disneyland’s website. The other ride that will be in Galaxy’s Edge is called Star Wars: Rise of Resistance, that will bring you into a battle against the First Order, though there is not an official date for when this ride will be open. Disneyland’s website only states that it is expected to open later this year, claiming that “they are pushing the boundaries of innovation and technology.”

There will be other things to do in Galaxy’s Edge, like customize merchandise. Visitors will have the opportunity to build their own lightsaber, with four different kinds of lightsabers for visitors to choose from. (This is also the point where Disney tries to get the most money from the people, knowing they will give in as there will be no passholder discounts at this shop.) However, visitors will also be able to design, build, and activate their own droid, and here passholder discounts will be available.

There will also be different galactic-themed dining options. Park-goers will be able to try “curious concoctions” or just some local beverages (alcoholic and otherwise) at Oga’s Cantina. For food there will be Docking Bay 7 Food and Cargo, which will offer American style food and vegetarian food choices, according to Disneyland’s website. There will also be food carts around to grab some quick drinks and snacks, if there isn’t a line more than a mile long. Then visitors can stop by the Milk Stand to grab a glass of blue or green milk, just like the blue Tatooine milk that Luke Skywalker drank as a child. Visitors can also try Ronto Roasters – grilled sausage or a pork wrap – or try out  Kat Saka’s Kettle for sweet and savory popcorn snacks.

Last but not least, visitors can stop by one of the outpost shops to grab some apparel or choose to be a part of the First Order or Resistance. Seems that there will be a lot of amazing things in Star Wars: Galaxy’s Edge, which could justify it taking almost five years to build.