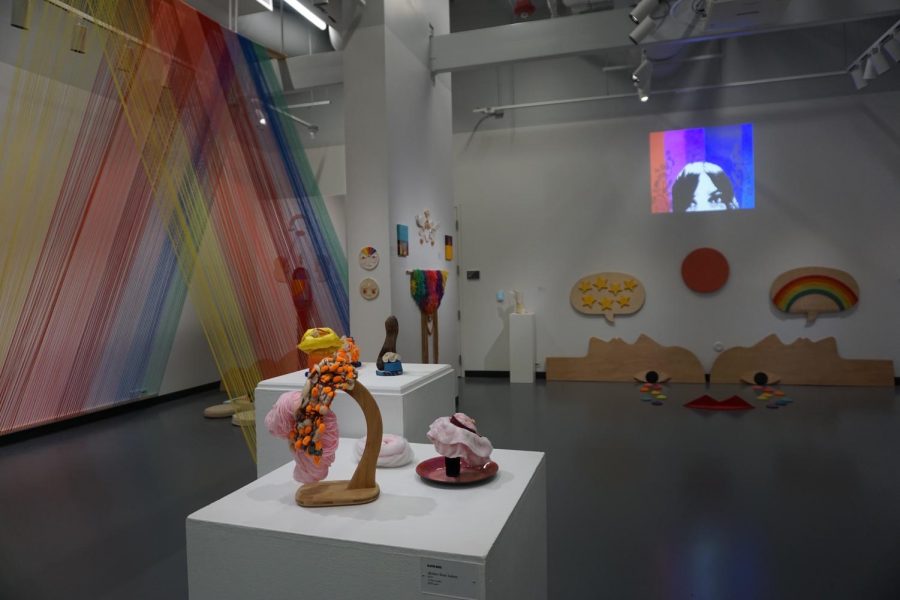 The "Chromatic: Grounding with Color" exhibit displays a vibrant combination of the work of artists April Rose and Katie Ruiz.

Mesa College’s art gallery presented a vibrant first exhibition of the Fall 2019 semester titled “Chromatic: Grounding with Color,” featuring two acclaimed artists based in San Diego. The incredibly colorful works of artists April Rose and Katie Ruiz were curated by the gallery director, Alessandra Moctezuma, for the exhibit. Both artists are known for their use of delightful patterns and a broad spectrum of hues in their artwork. The exhibit, which ran from Aug. 19 to Sept. 11, hosted a reception and artist talk on Aug. 29 at the gallery where guests had the opportunity to meet and listen to the artists while viewing their work. Attendees were also encouraged to create colorful pom poms for a collaborative display outside to celebrate the chromatic theme of the exhibit.

Aside from the bold colors seen in both their art, Ruiz and Rose’s work also share themes of nature, fertility, and female power. Moctezuma described how the idea to pair the two artists together came to both her and her assistant, Jenny Armer one day. “We’re always chatting our ideas,” said Moctezuma. “And we both thought, (like a) lightbulb (lit up), that these two artists would just be amazing together.”

For Ruiz, most of her work consists of painting, drawing, weaving, and the use of found objects. Symbolism and the influence of Latin American textiles are especially prominent in her paintings. She is recognized for her blanket paintings and explained that she has “become the blanket girl.”

“I started painting blankets in 2015,” said Ruiz during the reception’s artist talk. “I wanted to find a new way to make a figure painting that told a different narrative, a different story.” She continued, “I’ve always been drawn to Mexican textiles. I’ve always loved those bright color combinations and that was the first thing I wanted to do … bring in somehow some of my heritage and textiles into the works.” From there, she started researching textiles, blankets, and different patterns to later incorporate her studies into her work.

Later, Ruiz learned to do traditional back strap weaving at an artist residency in Oaxaca. “It’s an extremely slow process, so painting and weaving really became two different things for me,” said Ruiz. She explained that painting was for “when (she) really wanted to push and be wild with paint” since she’s always been a painter and was very comfortable with the medium. “Textiles is a much slower, time-consuming medium … (it was) a different pace (and) for different emotions, I use different things,” she added. Objects of nature such as shells, rocks, and sticks are integrated into her weavings and sculptures because of her strong interest in nature. She is also particularly drawn to the Southwest and her work is influenced by its landscape, ocean, and plants.

After learning to weave, Ruiz didn’t have much time for painting as she was busy curating. She found herself playing with her woven creations until they became art sculptures. She told guests of the reception, “I always have to be making something, so I would just twiddle away and find someone’s high heeled shoe and a broken chair, and put these things together as a way to keep my sanity while I was curating.” Ruiz’s paintings, weavings, and sculptures are all represented at the exhibit.

Rose’s multicolored clay reliefs, sculptures, installations, and collages beautifully complement Ruiz’s work in this exhibit. The use of symbolism stands out in Rose’s work as well, as she uses iconic images of eyes, faces, and rainbows.

“I personally am infinitely inspired by the rainbow,” said Rose. “For me, (it’s) a miracle … (it’s) exposure to the magic that’s around us constantly.” Her work is greatly influenced by the vivid colors the rainbow contains, and the variety of combinations of those colors. While her work is visually very cheerful and vibrant, Rose expressed that her art is her therapy for processing a lot of trauma and darkness. Some of Rose’s art pieces playfully celebrate famous female artists such as Georgia O’Keefe and Judy Chicago. Also presented in her work are themes of childhood nostalgia, life’s simplicities, and nature.

Already distinguished for her ceramics and designs for ethereal clothing, Rose experimented with pieces that engaged the audience and larger scale installations in this exhibit. An example of this is perhaps the most popular artwork featured in the exhibit, Rose’s interactive installation titled “Chromatically Connected.” Staged at the center of the exhibit, the installation consisted of a pair of glasses connected by a rainbow, inviting two viewers at a time to connect with each other by wearing the spectrum glasses. Additionally, Rose debuted an animated film as a part of the exhibit.

Featured in the corner of the exhibit was a rainbow-like shrine that was a collaboration of Ruiz and Rose’s work. Another notable piece displayed in the exhibit include a table-sized color wheel in the shape of an eye made of found objects.

As a final note for the exhibition, Moctezuma stressed the importance of tradition — not only related to fine arts but the tradition of women craftsmanship. She described that although painting and working with your hands seemed to be a dying art, people have now gone back to valuing craft. “This exhibit (shows) that it’s at the level of fine art and contemporary art, and that it shouldn’t be separated from it,” said Moctezuma. “I think that’s something I want the students to see in this exhibit … that it’s about putting your heart in the making and exploring and not being afraid to express yourself.”

The next exhibition to be showcased at the art gallery is called “Brightest Beacons, Blindest Eyes” and will feature the work of John Brinton Hogan. The exhibit will run from Sept. 24 – Oct. 17 and a reception will be held the night of Sept. 26.