Mesa college gets jazzy showcasing “Jazz in the Courtyard” 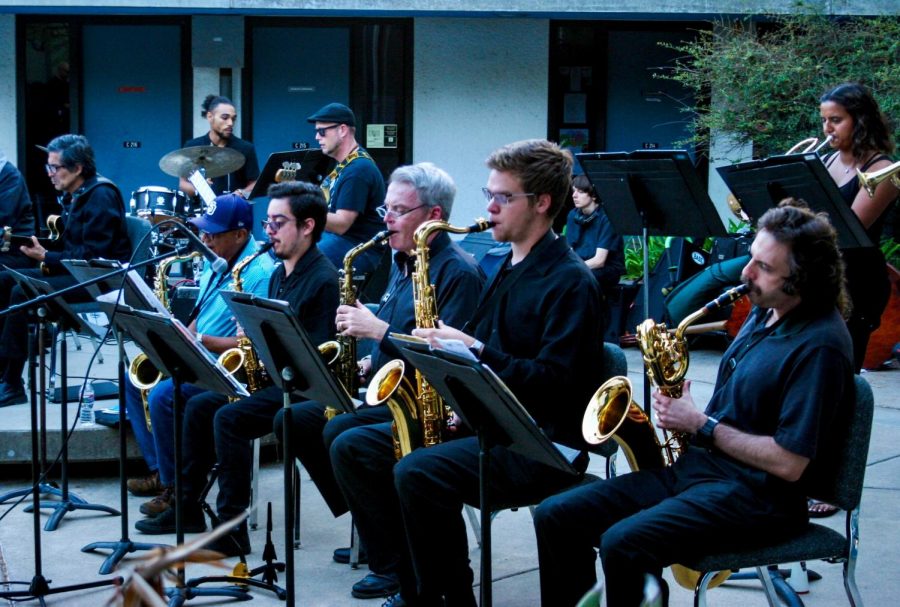 Mesa College's Jazz Big Band Ensemble in the middle of their evening performance.

The band provides this event a few times each semester, showcasing their talent through a free and public show. The performance was on Nov. 14 and was an hour long. It produced a crowd of about 30 people, mainly comprising of students, faculty, and a few parents of the performers.

Ian Tordella is the director and instructor of the ensemble. It is made up of different musical levels, A-D, and the performance contained a mix of all four. six instruments played in the band, saxophones, trumpets, guitar, piano, bass, and drums and cymbals with a total of 14 players.

Seven songs were presented to the audience, which were covers of originals, with a slight difference in sound because of the smaller amount of musicians in comparison to the professional jazz big band ensembles that the songs originated from. Throughout the performance, the musicians got many chances to demonstrate their individual musical talent, like in the second song, “Got that Basie Feeling,” the pianist Ezri Martinez produced an impressive piano solo that sounded very complex with fast shifts in musical notes, displaying an obvious product of developed skills. The saxophones also had an abundant amount of solos, provided in the third song, “Darn That Dream,” with Carlos Peña Martinez who gave a solo that created a smooth environment with calm tunes playing, embodying the fundamentals of this mellow song.  And in the sixth song, “If Dreams Come True,” Matt Kesner stood up from his seat to display broad, exaggerated, and high-spirited sounds.

These musicians, along with Jon Ortiz, Jacob Skaalen, and Thomas Circle on the saxophones, Nina Jerosch and Francisco Machaen on the trumpets, Diego Corriente and Daniel Peña on the guitars, Kris Donald and Rice Enright on the bass, and Zak Tatum and Kaelin Sloan on the drums and cymbals were able to showcase their musical development through the performance.

The song that really presented the truest and best form of the entire band’s sound was “Pick Up the Pieces,” an American funk song from the 1970s. The song was unique because it was loud and lively, as opposed to most of the other songs performed. This song required loud, fast-paced, and confident sounds from each of the instruments, proving to unveil the limits each musician was able to reach. This song provided the best performance of the ensemble.

A message that one can learn from this show is that even though jazz does not gain as large of an audience as contemporary styles of music, such as hip-hop music or pop music, it still serves as an important foundation that many styles of music utilize and should still be recognized and promoted. Carlos Martinez explained that jazz music plays a large role in contemporary experimentation of music through electronics. He referenced hip-hop music and explained that some artists “sample different parts of jazz songs, and they add drum beats to it and freestyle over it.” He also mentioned that jazz plays a large role in musicals today, in which he used the 2016 musical film “La La Land” as an example.

This class offers musicians an environment to  practice and develop their skills. Carlos Martinez said that so far, with his three semesters in the class, he has worked on his “sight-reading,” a skill that musicians take on in which one performs music on first sight, without any prior preparation. This practice is done in order to expand a musicians versatility in what they are able to play and also to learn new music easier. He adds that the class has also improved his improvising skills and has allowed them to “train their (musical) ear.”

This class offers musical potential to those who seek it, as well as great performances.