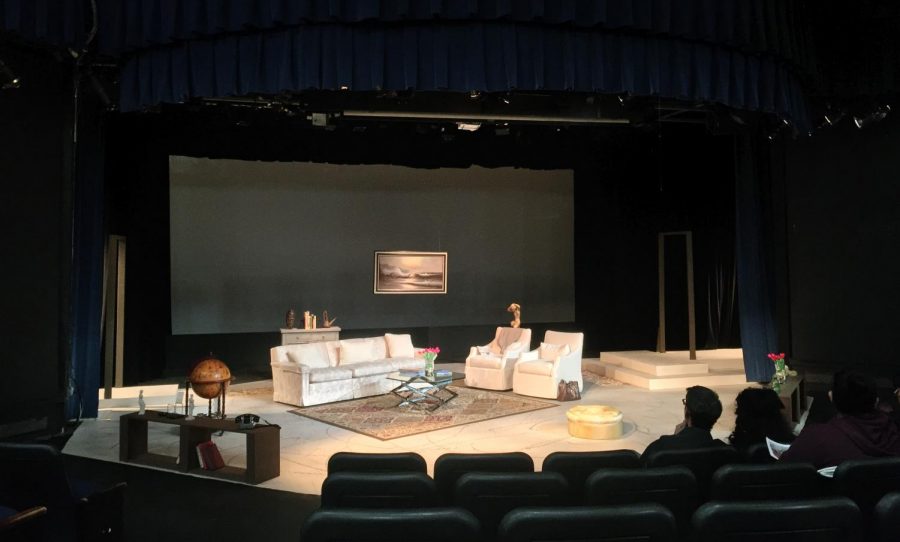 Mesa College Theater Company Presented “God of Carnage” by Yazmina Reza. “God of Carnage” is originally a french play which lands in the genre of comedy. The play is about two pairs of parents who gather up to discuss their children’s incident which Annette and Alan Raleigh’s child hurt Veronica and Milchael Novak’s son at a public park. Both sides agreed to discuss the situation in a civilized matter but conversations ended up becoming childish. So much chaos in the situation that at the end it was never solved.

George Ye and Sheldon Deckelbaum were the directors of God of Carnage play on Nov. 17. Tessa Lundgren played Annette Raleigh, a reserved and patient mother who later became impatient with her husband’s obsession with work. Joushua Pernrod played Alan Raleigh, a busy lawyer who continuously kept interrupting during the serious discussion about his son’s actions and seemed to care less about being present. Veronika Novak was played by Petra Bogardt, a defensive mother who just wanted justice for her son who lost his teeth by the hit of the Raleigh’s son. Lastly, Sean Foster played Michael Novak, a man who appeared to be a well-behaved father and husband but his anger brought out the truth.

At the beginning of the play, it was a bit unclear of what was going on and throughout the play there were a few moments where there were long pauses that made the audience a bit confused. Besides a few details, the acting overall of the cast was very well done. For Tessa and Petra having their scripts on hand, they did an awesome job picking up where they needed to without making it obvious that the script was right in front of them. Petra’s emotion of anger and Tessa’s annoyance on stage really brought their role as wives to life. The vomiting scene of Tessa’s character was very realistic. Although, it seemed noticeable to see when she received the object that helped her do the vomiting because the other character was seen hiding something behind the pillow. Joshua and Sean brought the charisma out of their characters. It was hilarious to watch Michael jump on the furniture and start to tease the rest.

The scene design fit well with the storyline, lighting and sound had no issues, and costumes as well as makeup fit every characters personality very well. Compared to Jacksonian performance, Jacksonian stood out best.