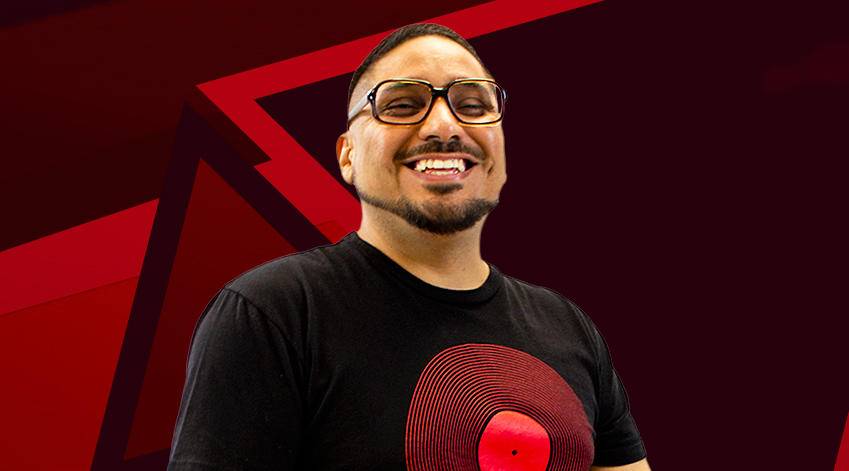 From harassing producers to breaking new artist, Beto Perez has seen it all over his 16 year career. I got to sit down with him to discuss his early life and how at an early age music played a big role in upbringing and the trials and tribulations it took to have his own radio show.

Q: How did you fall in love with music?

Beto: I grew up with 20 siblings, seven of them lived in the same house. Mom liked playing cumbias, dad played rancheras, one of my sisters was into Megadeth/hardcore metal, my brother Javier played oldies and my other sisters played ‘80s music. As I got older I developed my favorite sounds which was reggae and hip hop.

Q: When did you get introduced to radio and the radio business?

Beto: I got introduced to radio at 17 years old, I wanted to do radio when I was 6. I was driving back from Mexicali (and) I was in this place called La Rumorosa, which is located in the middle point of Mexicali and Tijuana that had crazy mountains and I remember looking out the window and seeing all these cars flipped over the side of the cliffs. As I was paying attention to that, this radio Mexican DJ came on and he was very charismatic and super animated. I told myself when I grow up, I’m going to be a radio DJ ‘cause it seems like all they do is play music and don’t do anything else.

Q: Did you practice at first? Or tried to emulate your favorite dj host?

Beto: Na never, to this day I’ve never practiced. The only thing I would do growing up was read the freeway signs out loud or billboards. I knew what I wanted to do in life and I jumped/created the opportunity.

Q: How did you create your opportunity?

Beto: There was a morning show producer by the name of Vic of 92.5 which was my favorite station.I was about 15 at the time and I’d call him on the weekends and harass him nonstop and after doing this for so long we became good friends. He told me when I turned 18 to give him a call but I couldn’t wait that long so when I turned 17 and a half he gave me an internship.

Q: what did Vic have you do as your time as an intern?

Beto: I was the morning show stunt guy, we would do stunts like stopping traffic on the Cornado Bridge, sneak into Petco Park when it was first being built. During one pride festival, he dressed me up as a disco ball and I danced throughout the whole morning show and I believed that’s what got me hired because I was willing to do anything. So when I actually turned 18 I got officially hired by 92.5 and I was there for 10 years.

Beto: While I was at 92.5 I worked overnights on Z90, after that I came to iHeart and at the time it was Kiss 95.7 which flipped into Jam’n 95.7 and I did the night show for a couple of years

Q: Was there any hardships you faced during your time in radio?

Beto: Yeah till this day, there’s a lot of sacrifices. You give up birthdays, holidays, weddings, funerals. Since I was 17, I had no weekends off. We were short on staff and I wanted to learn the most. I wanted to put the work in to get to the place I am now. The pay wasn’t good til I was in my late 20s. It was crazy hours, hours that nobody wanted to work. And I told myself to not give up and I reminded myself why I gotten this far to not go back.

Q: what was your favorite moment in radio?

Beto: It was the first time I had my own radio show at 19.