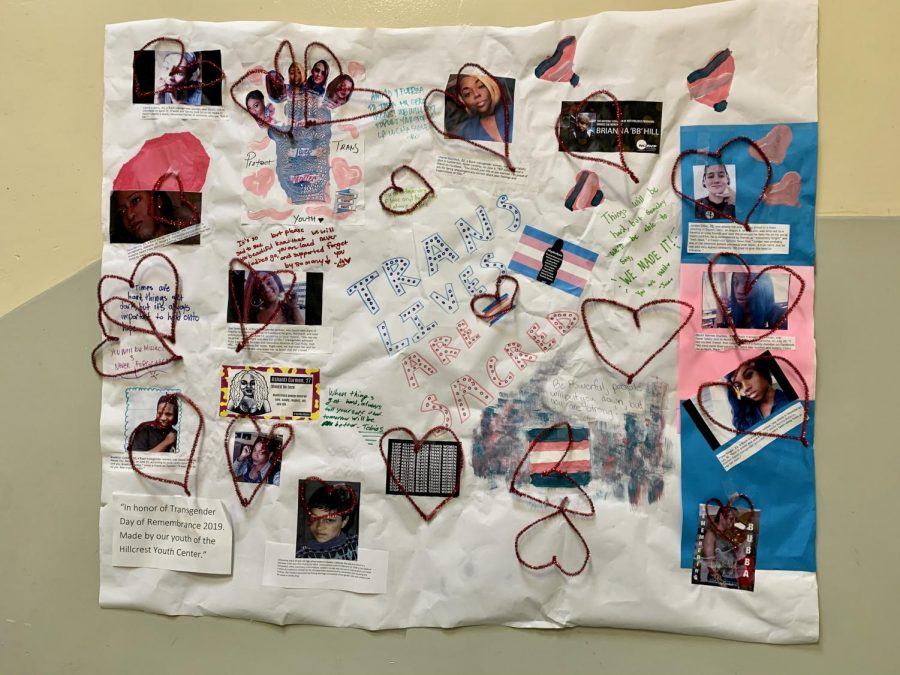 The San Diego LGBT Community Center in Hillcrest recently held the Annual Transgender Day of Remembrance ceremony. On Nov. 20, transgender people, activists, and members of the community had come to the center in unity to mourn and honor the transgender lives lost this year.

The statistics of hate crimes towards the trans community are staggering. According to recorded data, there have been a total of 331 transgender people killed this year, a large portion being women of color. The data compiled by “Trans Respect Versus Transphobia” showed that  30 trans were killed in the U.S., 65 in Mexico, and 130 in Brazil during this year alone.

The Transgender Day of Remembrance is a day to commemorate transgender people who’ve been murdered or victims of assault. This is the 20th annual year of this observance that was first started in 1999 by Gwendolyn Ann Smith. In 1998 Rita Hester, an African American transgender woman was gruesomely murdered in Allston, Massachusetts, which was not covered by many news outlets nor given any attention. In response to this, the next year Smith organized a candlelight vigil for her death in San Francisco. Smith also created a website called Remember Our Dead showing a list of victims worldwide traced all the way from the 1970s to today. Yet, continuing to hold lights that represent those who’ve fallen every year combats silencing of the community.

The Transgender Day of Remembrance event had two segments, the first being a candlelight vigil and a ceremony in the Center’s auditorium. The Center’s staff gave out candles to participants and commemoration books filled with the names of transgender people murdered this year in the U.S. A mass of people holding candles began to walk down University Avenue from the Center despite the heavy rain downpour. Accompanied by SDPD officers (San Diego Police Department) participants marched around Hillcrest and carried poster boards holding the faces of the transgender victims.

After the candlelight vigil, everyone congregated in the auditorium to listen to the LGBT Center’s members discuss how to overcome adversity. The event speakers all offered a variety of enlightenment about what one can do for the community and finding solace. The Transgender Services Coordinator, Naya Marie Velazco opened by welcoming the Santa Ysabel Land of the Lipay Nation of San Diego and the La Jolla Band of Luiseno Indians. The band played a traditional Native American pray song for the lives that were being honored that night.

The next speakers of the event discussed the harsh reality of the abuse that transgender victims have experienced. Pamuela Halliwell, a therapist for marriage counseling and families explained the injustice these victims faced was also being misgendered. Shockingly, Halliwell had also mentioned that some of these victims were killed by their closest family members, which seems to be a theme found in crime reports. She stated that some of the victims’ headstones were even engraved with only their birth names, discrediting their identities. With this news, she had projected that in order to take a stand, the community must continue to convey the importance of only saying their true names.

One of the pinnacle parts of the evening was Ruby Phillips’ speech. Recently, on Oct. 16, 2019, Philips’ was inducted into the LGBT Veterans Wall of Honor for her service in the Navy and being an active member of the community for 35 years. Philips, a Navy veteran, and transgender activist discussed her experience and encounters of homophobia from a very young age. Even while serving she had experienced discrimination from her fellow peers in the Navy who had even attacked her brutally without any repercussions. She was beaten so badly that she was in a coma for two weeks after the incident. However, she noted that despite these afflictions everyone has a story. Every transgender person has a story of adversities they have had to face, “Adversity can either break you or make you. It is our passion, not the adversity itself that determines (how) our life story will develop, so go out there and make the ending to your story.” The audience snapped their fingers, then followed by loud cheering and clapping from hearing Philips’ words.

At the closing of the ceremony, the auditorium projector projected images of all the transgender victims in the U.S. with their names, cause of death, and age. The youngest of the victims was only 17 years old. Volunteers announced the names of the victims, then attendees repeated them after out of respect, for their condolences, and for remembrance. At the end of the night, trans-services organizer at the Center Deja Cabrer spoke to the audience, leaving them with the message to go home and take care of one another and transgender loved ones.