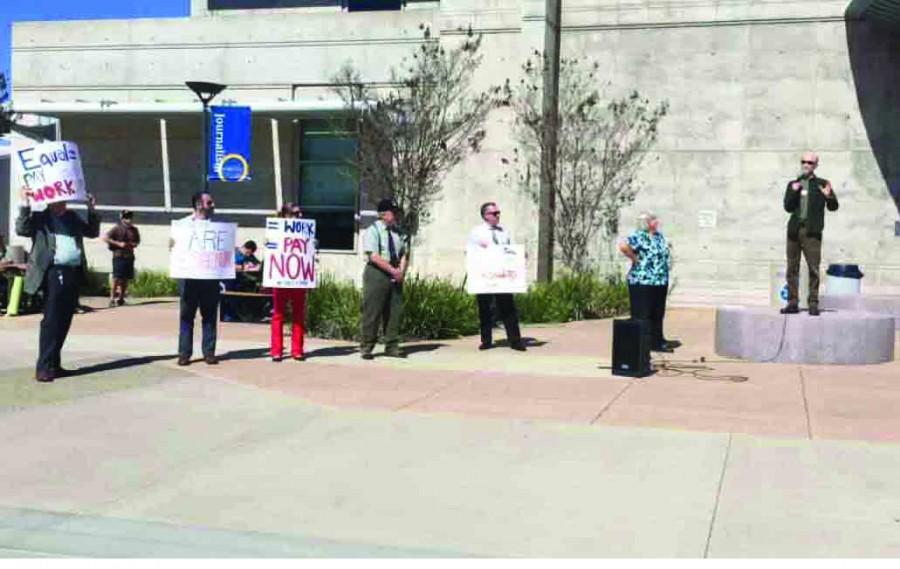 National Adjunct Action Day made its way to San Diego Mesa College on Feb. 25 as staff, students, faculty, and supporters all rallied up to speak out about the growing adjunct crisis in America.

John Hoskins, fellow adjunct professor, stated that 75 percent of the staff members at San Diego Mesa College are forced to be part timers when in 1970, the opposite was true.

Multiple students, professors, and faculty members spoke out at the rally concerning the rights of adjuncts not only in our district, but across the nation.

Pamela Luster, President of Mesa College, said that as a former adjunct herself, she supports the adjunct community completely and believes that this is an important issue to bring up to the governor because community colleges all across the nation are funded lower than any other educational institution.

Susan Ferguson, adjunct professor at multiple colleges in San Diego, stated, “Adjuncts are only allowed to teach three classes at each location. So we are constantly juggling multiple classes at multiple campuses. A professor could be teaching eight different classes and still receive half the pay of a full time professor. That’s simply not right.”

According to Jim Mahler, President of the Community College Council and California Federation of Teachers, the adjunct crisis is a civil rights issue we should all be concerned about, because adjuncts are treated like second class citizens. Adjuncts are paid less than any K-12 level teachers, and on top of that, they are not offered any stability regarding their work. Mahler hopes that with this rally, the nation could shed light on the situation and create a new paradigm for adjuncts to receive the fair pay for their work.

Adjuncts like Kristine Glauber face great financial difficulties because not only are they credited professors who spent a fortune getting their degrees, they’re now struggling to find work and pay for all of their student loans. Glauber admits that although she makes less of an income now than she did working as a graduate student in college, she loves every moment of it because teaching is her one true passion.

The sad reality, though, is that many adjunct professors across the country are being forced to leave their profession because they cannot financially support themselves. Hoskins stated in the afternoon rally, “It is unfortunate that we are losing that intellectual capital all across the nation. These part timers are fully qualified to do what they do. They just aren’t offered enough full time positions to show that they’re qualified.”

Union members all joined hands to bring to the attention of Governor Jerry Brown that there needs to be a budget set aside for part timers in the May Revised Budget Proposal. In this budget proposal, the adjunct community hopes they will receive equal pay for equal work, paid office hours, and more full-time faculty positions. Petition letters, to be signed by supportive students, can be found in the Veterans Resource Center on campus. According to Mahler, each letter that is filled out will help the cause and bring to Governor Jerry Brown’s attention that the adjunct community demands changes for a more just future.