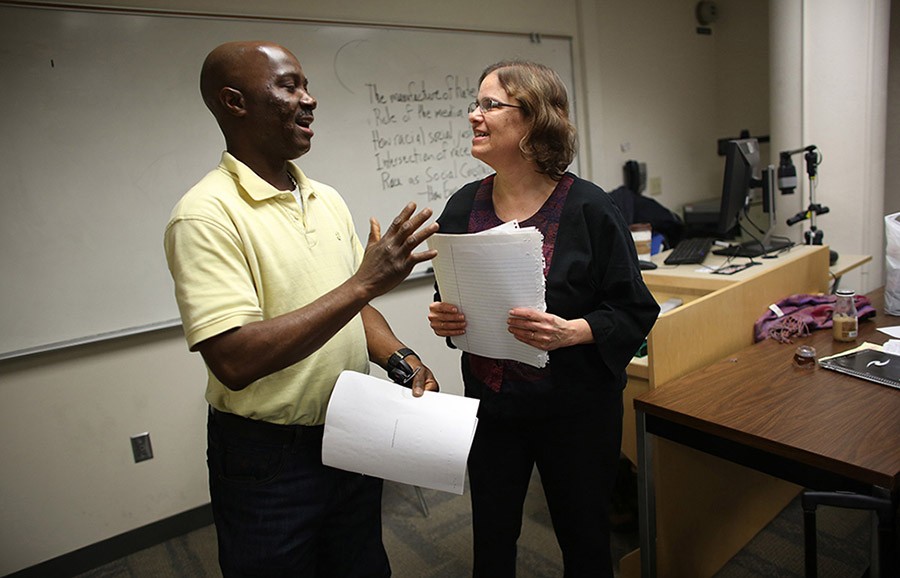 Student James David, left, laughs with professor Anne Winkler-Morey as they talk about an assignment on March 5, 2014. Winkler-Morey teaches as an adjunct professor at Metro State University in Minneapolis. (Kyndell Harkness/Minneapolis Star Tribune/MCT)

The San Diego Community College District contains three institutions of higher learning: City, Miramar, and, of course, Mesa. It is the second largest community college district out of 72 in California. Along with Southwestern College in Chula Vista these schools cover an enormous area spanning from Otay Lakes Road through downtown San Diego to nearly 30 miles north in Mira Mesa, serving over 130,000 students. Attempting intrepidly the tremendous task of teaching all of us are the professors.
Some professors are “full-timers” meaning they teach five courses at one college, earning full benefits and, usually, with tenure, an average salary of around $80,000. Full time, or contract professors, used to make up about 75% of the total professors on any given campus, but today, only constitute 25% of the teaching pool. Since 1970, the number of full timers has been dropping off and replaced by an increase in the alternative: adjunct professors.
Adjunct professors are part-time staff. Traditionally, adjuncts were industry professionals teaching one or two specialty courses not taught by any full timers. But today, adjunct professors make up the majority of faculty on most college campuses in the United States. Why? Adjuncts are cheaper than full timers.
“It’s out of balance,” says Geoff Johnson, Mesa College’s American Federation of Teacher’s rep and the driving force behind Campus Equity Week, “the going rate for an adjunct professor is between $2,000 and $5,000 per course.” This may sound like a good gig until you learn both that year-long teaching positions are terribly scarce and sometimes, due to mandatory annual contract negotiations, volatile, and that schools cap the amount of courses that can be taught on one campus at three because teaching four classes gives you the right to health benefits. This equates to around $30,000 per year, a $50,000 difference between full-time professors, even though they are often of the same educational level.
This three course cap forces these instructors to zip and zoom all over San Diego to teach classes at whatever school they can, creating erratic scheduling across the board and one could even say, hazardous working conditions. These “Freeway Flyers” as they’ve come to be known are sometimes juggling six courses at three different colleges, reminiscent of an under-resourced, overloaded public defender working on their fiftieth case in a week.
If complete adjunctification is the way schools are headed – and all signs point to this – the students, must, together with the professors, open a discussion over the mistreatment of part-time teachers for their career’s and the education system’s sake because exhausted, stressed teachers inevitably leads to half-hearted lesson plans and lectures to bored, disinterested students, creating an environment not conducive to any learning that could be considered productive.
Campus Equity Week, October 26-30, will be aiming to do just that. During the week, activities between students, faculty, and local labor leaders will address both student and teacher equity through presentations, panel discussions, and more. “But I’m just one man,” says Mr. Johnson, “I need both student and faculty volunteers willing to actively participate in getting the campus equity ball rolling towards meaningful and lasting reform.”
Students and teachers, for more information on Campus Equity Week and joining the volunteer corps contact either Geoff Johnson or watch Mesa Press for more articles detailing the event coming soon.