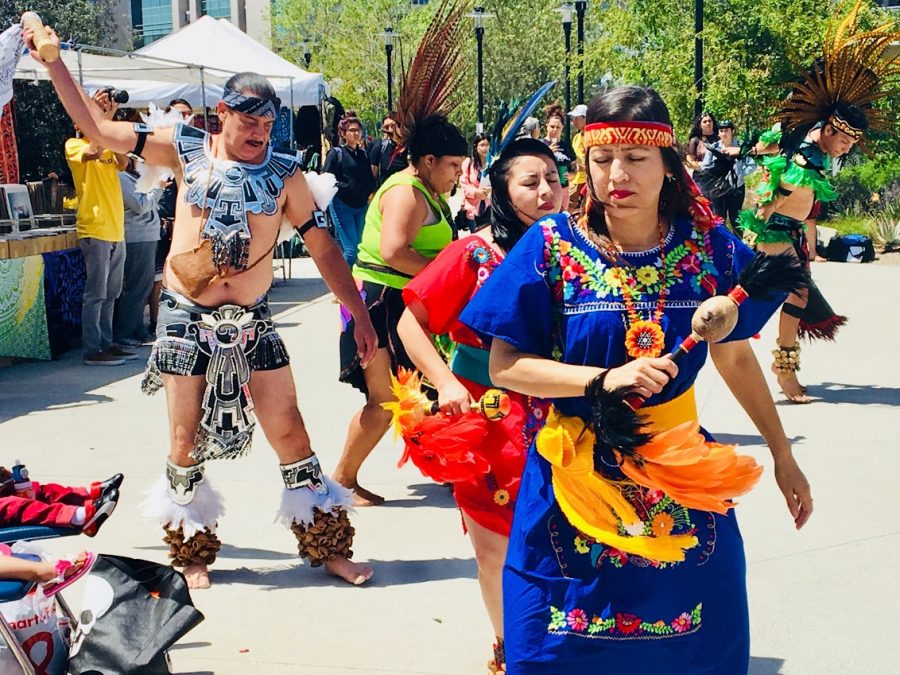 Dancers perform what is known as Danza Azteca at Mesa's Sunrise Plaza.

The San Diego Mesa College celebrated Cultural Unity Week with various events including the Festival of Colors on April 12. The Festival of Colors was held from 10 a.m. to 2 p.m. at the Sunrise Plaza. It was sponsored by the Committee for Diversity Action, Inclusion and Equity, the Mesa College Humanities Institute, and the San Diego Community College District Diversity Committee. The main focus of the event was cultural appreciation.

The MC of the event, Prince Habib, asked several students what diversity means to them and how they can connect with others in a simple way. Many agreed that being open and saying something as simple as “hello” was a good way to start diverse human connection. Victoria Lara, a student at Mesa said, “we can have more conversations with people, growing up stories, and our common struggles. It makes us more inclusive as a community.”

Jamie V. Jones, co-author of “The Gumbo Pot Poems: A Savory Recipe for Life, Community and GUMBO through Poetry” said, “when you’re establishing a relationship and you want to move toward diversity, you want to be encouraging and including.” Judy Sundayo, the president of Committee for Diversity Action, Inclusion and Equity at Mesa said, “Embrace all people and cultures, learning about each other, respecting each other, including everybody and even reaching out to try to pull people close.”

Several other events took place during the Festival of Colors including a spoken word set by Bocafloja, a rapper, poet, spoken word artist, and social communicator from Mexico City, Mexico. There was also a drum call by Teye Sa Thiosanne, an African Drum and Dance Company in San Diego. Two other drum dances took place as well including a Middle East drum dance and an Aztec dance.