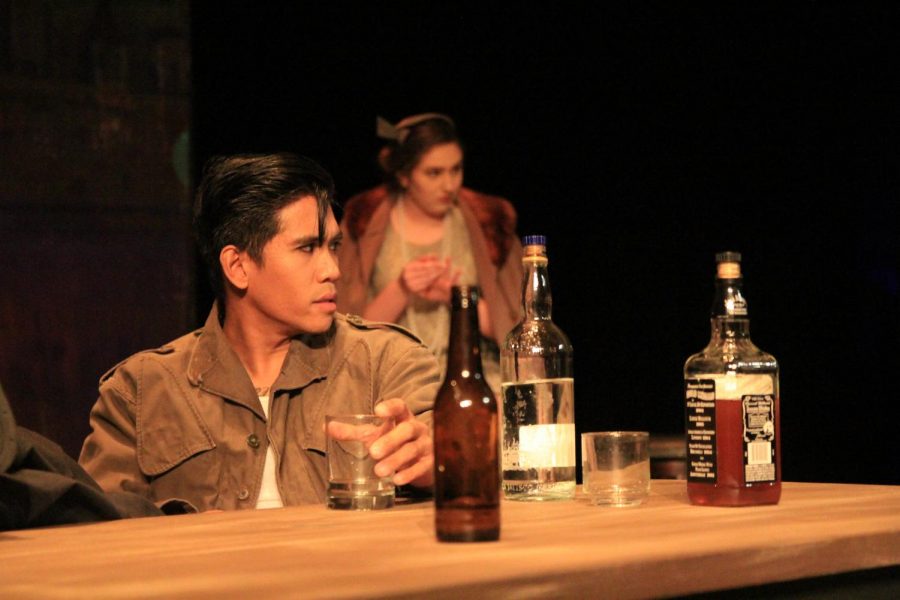 The San Diego Mesa College Theatre Company presented the “The Resistible Rise of Arturo Ui,” an allegorical satire meant to draw chronological comparisons to the rise of Hitler in post World War I Germany. It ran for the first two weekends of May, from May 3-5, and May 10-12.

Ui is a Chicago thug who decides that he wants to take over the “Cauliflower Trust” with other gang members, the Cauliflower business controlled by local business leaders. The play opened up with an unnamed cast member explaining context of the film outright. This is a departure from normal play conventions in that uncovering the plot is usually something the viewer had to worry about. The first scene featured members of the “‘Cauliflower Trust” discussing how to generate more profit during The Great Depression, an air of superficial importance surrounding the actors. The Mesa Theatre Company’s take on “The Resistible Rise of Arturo Ui” was definitely worth the money, the evident budget limitations notwithstanding. Even so, their costumes were fittingly made for the play, as Ui and his fellow thugs were dressed in stereotypical thug clothing.

The play made sure to employ some humor and make the audience laugh, with funny neurotic statements here and there by the characters. In particular, Ryan Nebreja’s rendition of Ui was at times incredibly amusing. His sarcastic attitude towards the other characters played well into the parody aspect of “The Resistible Rise of Arturo Ui.” His performance rivaled that of Anthony Estrada, who played Emanuele Giri, Ui’s second in command henchman. His perverse laugh made him creepier than Ui, and captured the menacing character of a Chicago gang member perfectly. Interestingly enough, the business owners of the “Cauliflower Trust” acted equally as duplicitous, a motif the play came back to repeatedly: How subversive hyperbole can be dangerous. As Ui’s fellow gang members and the ‘Cauliflower Trust’ attempt to undermine each other, the ruthlessness with which Ui exerts his power does not go unnoticed within character relationships.

Even if the viewer did not understand the underlying message and historical context of this film, its director George Ye left a note that clearly spelled it out for the viewer. “While Hitler may have been the propagator of hate,” Ye muses, “was he the author of it? … History can and does repeat itself, and like it or not, we all play a part in it.” Ye draws a connection to contemporary politics. It is undeniable that in recent years there has been a steady rise in populist governments around the world, and the impact of such incendiary politics can be seen in the play. Indeed, Bertolt Brecht, the playwright who authored “The Resistible Rise of Arturo Ui,” was not only criticizing Ui and populist leaders like Hitler but also the societies they are a part of that enabled his despicable actions. Hitler and the influence of his distasteful rhetoric could’ve been limited if the German people had been willing to resist it-as they were not, they suffered from the persistent mishaps of fascism. The viewer is left with an unsettling feeling that Ui’s unscrupulous character is perhaps more familiar than we’d like to admit.