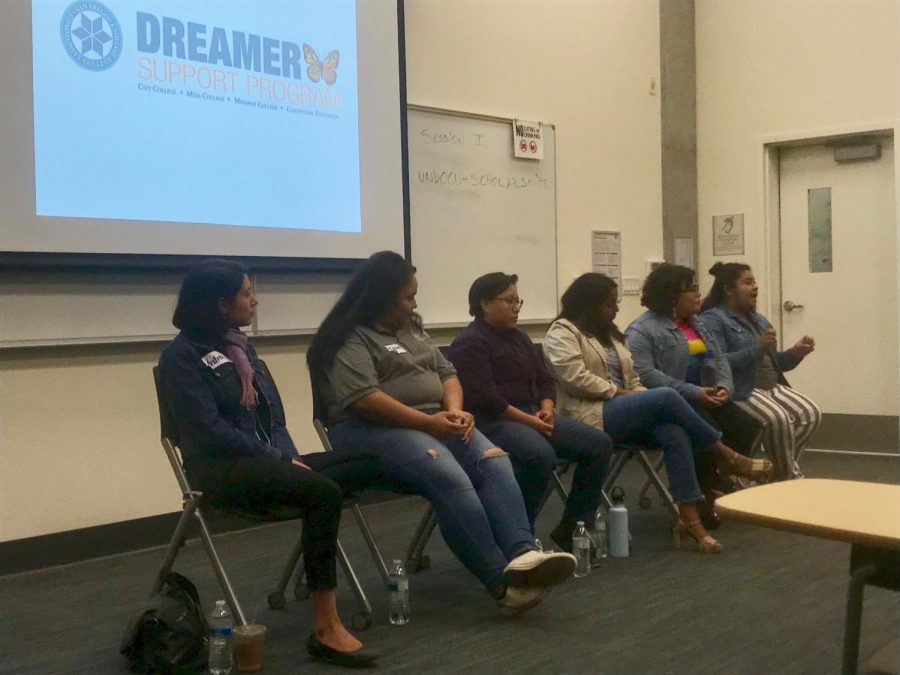 Panelists at the "I did it, so can you" student panel address the audience at the Empowering Our Undocumented Communities conference

Each workshop and panel was designed to educate, empower, and spread awareness about the undocumented community. The free event featured nationally-acclaimed poet and public speaker Yosimar Reyes, as well as a complimentary lunch, resource fair, and raffle.

A workshop titled “I did it, so can you” was a panel featuring six undocumented students and former students from different colleges and universities in San Diego. Attendees were invited to learn more about the undocumented student experience, share resources, and build community.

The panelists spoke to a diverse crowd of students, educators, parents, and allies. They began with expressing their initial feelings surrounding college as an undocumented student.

San Diego State University alumna Andrea Guerrero spoke about the excitement she felt upon first being admitted that was shortly followed by disappointment, as her family could not afford tuition. “This was before DACA (Deferred Action for Childhood Arrivals) and before the California Dream Act, and I remember feeling so discouraged that I had to put everything on hold, but thankfully my parents have always been so supportive,” Guerrero said.

San Diego Mesa College student Danna Ley Arreola shared a laugh with the audience as she explained how clueless she felt in the beginning. “I didn’t even know what a unit was… I didn’t know anything,” she said. Eventually Arreola was able to figure out how to register for classes and met with a counselor for additional guidance. “Here’s what I got. Tell me if I did this right or wrong,” she said. In awe, her counselor asked, “How did you do this?” Arreola replied, “Google.”

Other panelists shared their frustrations with the college system and its apparent lack of resources, but all of them shared the same fear of uncertainty about their future as an undocumented student. “It’s scary because you never know if one day ICE (Immigration and Customs Enforcement) is going to come and deport you,” Arreola said.

SDSU student Sandra Lobato explained how when she first began her educational journey, there were virtually no resources. “I was one of those students who was completely frustrated with that system,” she said. This frustration eventually pushed Lobato to become a founder of the San Diego Borders Dreamers, a group that regularly works to improve the lives of immigrants through events, fundraising, and activism.

Through all the fears, frustrations, and excitements of their educational careers, each panelist stressed the importance of a strong support system. They expressed gratitude for the counselors, parents, teachers and friends that aided them in their journey.

Arreola spoke about the many times she has been able to motivate herself by thinking about all the undocumented people who aren’t able to pursue higher education. “ I sit in bed and think that I don’t want to do this anymore, I want to quit, I want to give up, I don’t want to do anything. But then I sit back and think, ‘OK but who is going to fight for those who are in the shadows?” she said.

At the close of the session, the panelists were asked to consider what defines them. Lobato knew her answer immediately. “My status does not define me. My potential does … my willpower and my resilience,” she said.

SDSU student Alondra Rios expressed the contrary. She explained how she finds it difficult at times not to feel defined by her status. “The way my life is is kind of (built) around that status. Ultimately I know that it doesn’t define me, but it is hard to believe it and live it that way,” Rios said.

Arreola explained that no one can define her but herself. “I define me, because there’s nobody else that can. I have that power over myself and so do every single one of you,” she said. Her motivating words left the audience in silence, with a few nodding in agreement.

Other workshops at the conference had topics including transfer and financial aid opportunities, scholarships, mental health, as well as a “Know your rights” workshop.

The conference was made possible by the California Campus Catalyst Fund grant from Immigrants Rising, a group focused on empowering undocumented youth to pursue higher educational and career goals. The San Diego Community College District was one of three colleges and universities selected for the grant, and plan to use the rest of the funds to develop Dreamer resources. This includes counseling, peer mentoring, and outreach at each campus.