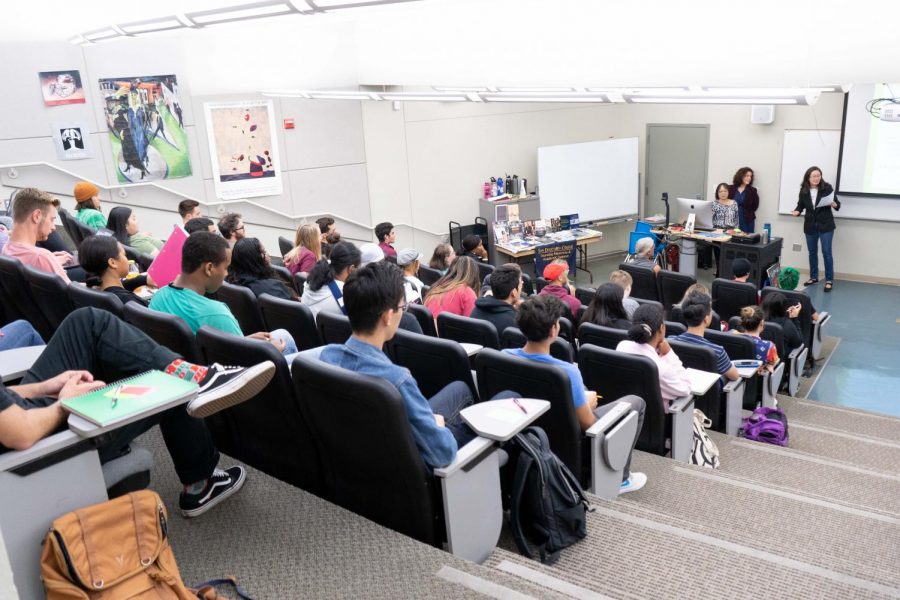 As part of Mesa’s first LGBTQ+ Celebration Week, Professors Gloria Kim, Jaye Van Kirk, and Mary Gwin presented “Queering Up Sex-Ed” on Oct. 15, in which they went over the many issues and obstacles the LGBTQ+ community faces with getting a sexual education in school.

What are a history, psychology, and philosophy professor doing teaching sex ed., one may ask? Well, as opposed to just an inclusive version of the “birds and the bees” talk, or the ever legendary banana demonstration, the lecture was more about how sexual education has been restricted across the country, and what measures have been done to both allow and prevent this. Its purpose, said Professor Kim, was to “break up binary thinking about gender, sex, and sexuality,” and to “start a discussion about important issues regarding sexuality.”

Gwin and Kim discussed the very important difference between sex and gender, and how the two can be related or not all. They explained how sex is biological and assigned at birth, while gender is a social construct, and can be completely different from one’s biological sex. It was said that gender roles and identity, something many people try and figure out while in school, tend to rarely be discussed with students, in seuxal education classes or otherwise.

Gwin and Van Kirk asked people to share what kind of sexual education they had, with answers ranging from none at all, to enough to be sufficient. There were no two answers that were exactly the same, though Kim shared that she also had a strict religious upbringing, same as many students.

Gwin also went over the laws and regulations regarding sexual education in the United States. Shockingly, it was revealed that only nine of the 50 states require a medically accurate sexual education, involving medical and biologically accurate terms.. So as thorough as one’s lessons may be, how is a 14-year-old to determine what is biologically and medically correct? She also delved into the “no promo homo” laws, which are laws in six states- including Alabama, Louisiana, Mississippi, Oklahoma, South Carolina and Texas– that actually prohibit or limit the mere mention of anything related to the LGBTQ+ community in public schools.

In addition to the restrictive laws, they also delved into different Supreme Court cases having to do with sex and gender, including the case R.G. & G.R. Harris Funeral Homes Inc. v. Equal Employment Opportunity Commission, which was about whether discrimination on the basis of gender identity was included in Title VII of the Civil Rights Act of 1964, which discusses equal employment opportunity. All of the presenting professors discussed that not only is a lack of education for queer people dangerous for the LGBTQ+ community, but a lack of education for everyone is dangerous, as ignorance can be just as harmful as a disease.

There was some actual sexual/medical information given, such as the different ways of creating families, including more than just “heterosexual copulation”. Van Kirk discussed the options of gestational carriers (a woman carrying a pregnancy and delivering a child for others using their eggs), in vitro fertilization (the process of combining an egg and sperm outside of the body), and many other options. Van Kirk, Gwin, and Kim informing Mesa students is something that may have already made a consequential difference in a student’s life.

The presentation ended with a question and answer segment, where the professors answered any questions the students had, which included queries about help for students, where asexual people can get information, and more.