AS invites all students to free Thanksgiving feast 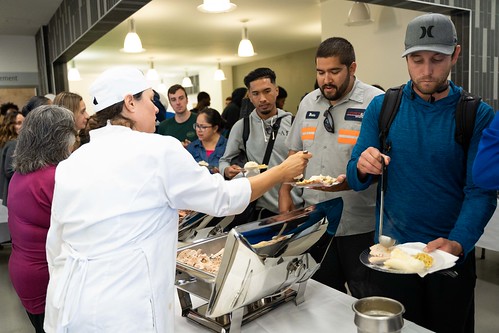 The event took place during the afternoon on Nov. 21, just before students started Thanksgiving break. The hallway on the third floor of the Mesa Commons building was lined with tables of fresh and hot traditional Thanksgiving foods: turkey, stuffing, mashed potatoes, and cornbread, just to name a few.

Visitors were told to line up and pick the food they would like. A small group of visitors who showed up before the doors opened were chosen to be the first to line up and get food. All the others who had shown up after followed. Visitors were allowed to go back into the line whenever they pleased as soon as the initial line of people had cleared up.

A separate room filled with long tables and chairs are where the visitors sat and ate. The food was provided by the Culinary Arts/Management Program at Mesa. The preparation of the food was done through the allocation of funds decided by the AS. Choosing the Culinary Arts Program was done as an act of support, according to Mark Girton, a senate representative of the AS. Girton mentioned that they also had the Mesa Jazz Big Band ensemble to thank, which was the entertainment of the feast. The AS involved these two programs to bring together the communities of Mesa College and to make this event possible.

Kicking off the event, Victoria Miller, an AS advisor and Dean of Student Affairs gave a short speech on the feast’s significance in the Mesa community. She explained that this event was to feed those who cannot get a home-cooked meal on Thanksgiving. According to Miller, this issue is prevalent among students at Mesa. Student leaders had noticed that many of their peers were not offered the opportunity to participate in this Thanksgiving tradition. Miller said student leaders “did not like the way that sat.”

Promotions of the event have been successful, producing about 250 to 300 individual visitors each year. This year they aimed for a confident number of 400 individuals to attend, as stated by Miller. Jacob Babauta, a senator of the AS as well as one of the directors of the feast, was happy to see the amount of people that showed up, considering his knowledge of how influential this event is. He said, “we’ve had a lot of students who have talked to us about how our events may impact them in a positive way.”

The feast’s main goal of feeding those who do not get a home-cooked meal on Thanksgiving is exemplified through the impact it has on people like Enrique Cheng, a third-year student at Mesa. Cheng lives with other students and said, “to have a home-cooked meal is something I don’t get to experience.” He recognizes the positive influence events like this can create, and said that he wants to be included in as many events as he can

Freshly cooked food was not the only thing they were giving out. Raffles were being played, giving visitors an opportunity to win prizes, such as gift cards to restaurants and gas stations averaging to about $20 to $30 each. Canned goods were also being given out for free to whoever wanted them as well as nine free whole turkeys.

As what happens in most large events, minor complications occurred. At 2:56 p.m., an abrupt fire alarm set off, causing confusion amongst all visitors, including directors of the event. It was understood that the situation was not harmful, as explained by Miller soon after the alarm set off, but she told the visitors to evacuate and clear the room, and then enter again later. A student from the Culinary Arts Program mentioned that a large amount of smoke had developed in the kitchen and set off the fire alarm.

The crowd remained outside of the Mesa Commons building till 3:04 p.m. when it was announced that everybody could come back inside. Because of this incident, about half of the visitors left. Visitors were reassured that this issue would be resolved, with Babauta saying, “we lost some numbers, but we’re still going to do this, because it is a great event.” He was correct, because about 15 minutes later the room regained its original size with new visitors flowing in.

As stated by Courtney Lee, the Inter-Club Council Advisor (ICC), the annual event began in 2015, but was initiated by a separate event hosted by the ICC at the end of every Fall semester. This event was exclusive to “clubs and people related to clubs at Mesa College,” but that changed after 2015. The ICC event was discontinued, but the AS saw valuable potential in the concept of the event and “repurposed it,” said Lee. The AS added “equity and community service intentions to it,” and created the Thanksgiving Feast.

The AS works with different departments in order to create their events. For the feast specifically, Babauta explained that they “worked with student affairs to facilitate communications with different departments.” They do this in order to promote the event. He said the Office of Communications produces flyers. Babauta said they also have to coordinate with facilities services to obtain rooms and spaces. Not only that, but they do their own preparations, such as laying out colorful table cloths with decorative fall-themed ornaments streaming down the middle of each table, as well as hanging ornaments on the walls and other general event set up.

This event met its goal in feeding the students of Mesa College and providing a wholesome environment at the same time.