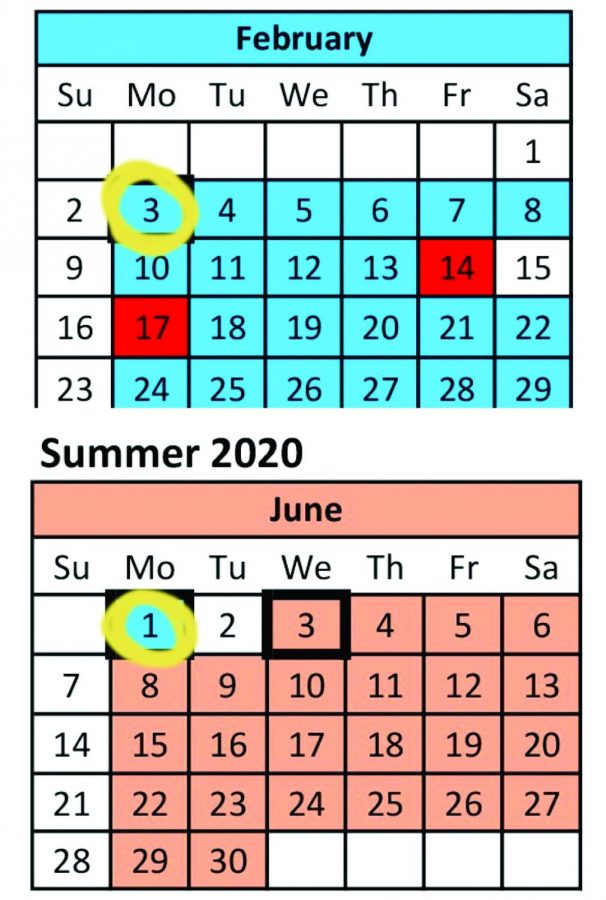 This upcoming spring semester will begin in February, a change from previous semesters, which have for years begun in the last week of January. Consequently, the spring semester will run later, ending in early June, the week after Memorial Day. Something students can look forward to with this change is a longer winter break this year than previous years. The change in calendar has been approved since Nov. 8, 2018 and will affect all colleges in the San Diego Community College District.

Dr. Isabel O’Connor, San Diego Mesa College’s Vice President of Instruction, explained that the SDCCD produces the calendar and is approved by SDCCD’s Board of Trustees. Both the district and the American Federation of Teachers (AFT), America’s second largest teacher’s labor union, must be in agreement for the academic calendar to be put in place. The calendar committee for SDCCD is composed of representatives from different managements and all weigh in to decide the next academic calendar.

According to the SDCCD calendar, this change allows spring intersession to be a few days longer, starting Jan. 2 and ending Jan. 29. Summer session will largely be unchanged, remaining at eight weeks starting from the third week of June to the second week of August. O’Connor mentioned that she did not know if there was any specific reason for this change.

“It allows us to have courses in a short term format and Mesa has a very robust set of course offerings for intercession. A lot of gen. ed. courses allow the students to move up in terms of earning units and get closer to earning their degrees.” according to O’Connor. “Another thing to remember is for example—other districts where I worked at—we tried to look at the high school schedules also and see when the students would be out of high school in case they want to take classes here in the summer.” added O’Connor.

The Vice President of Instruction also mentioned those who created the calendar may be keeping in mind whether or not the summer session fits in well with spring and fall semesters. “Do we have enough time to build a robust summer where we can have six week courses, four week courses, eight week courses? So all those are a consideration.” she said.

Each academic calendar has a one-year validity and is renegotiated annually. Spring semester begins on Feb. 3 and ends on June 1.