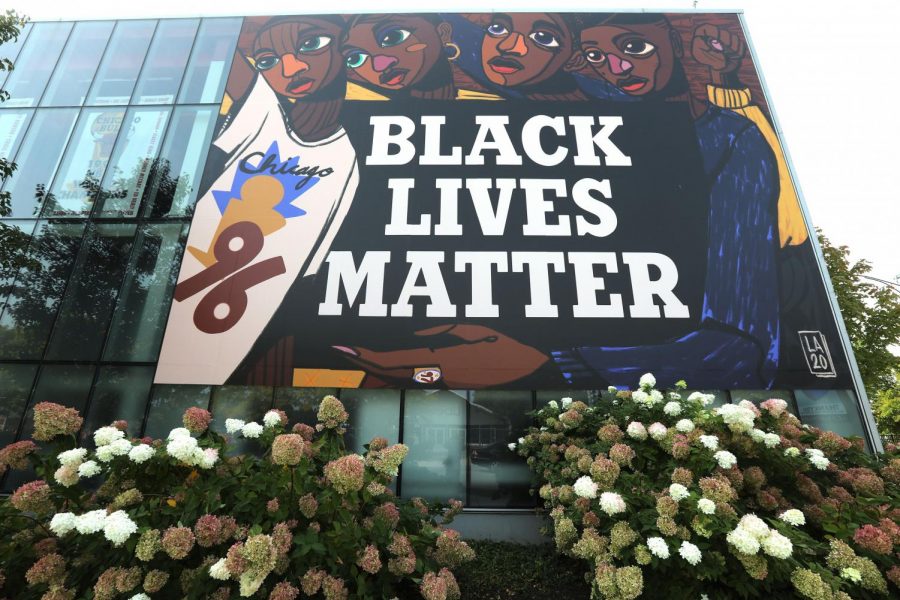 A BlackLivesMatter mural in Chicago

Over the summer, the Black Lives Matter movement was in full effect due to years of institutionalized racism and brutalization from police consequently bubbling over with the murders of George Floyd and Breonna Taylor.

Now, in October, the amount of protests and Instagram posts in regards to the movement have slowed greatly. In the heat of the summer, social media apps were flooded with posts with #JusticeforBreonnaTaylor, and if one of your friends was not vocalizing their rage, it didn’t look so good for their image.

To explain, the term “performative activism” is one that describes activism as a usage for someone’s own personal gain or image. This idea of activism was debated greatly, especially over the summer, and what its implications have in the success of movements like Black Lives Matter.

If you didn’t post, it was determined that you did not care. But if you did post and vocalized your rage, questions were raised in regard to your intentions: did you donate to bail funds? Are you registered to vote in the fall election? Do you have tough conversations with your family and friends regarding race?

These questions are valid, and so is the anger of Black women and men when it comes to their peers’ activism. White people, like myself, are usually the main culprits when it comes to performative activism. These movements have exposed institutionalized racism and many are just now becoming aware of the issues Black people face within the United States.

To my white peers, if you are just now becoming outraged, that’s okay. It is important to be aware of the many injustices people of color face in the United States. Yet, if you believe that this is just now a problem, you are sorely mistaken. These issues have been going on for years and that is the problem of performative activism.

Your “Fuck Donald Trump” t-shirts and posts visualizing Breonna Taylor in a flower-crown aren’t hiding the fact that in the 2016 election, 47% of white women voted for trump alongside the 62% of white men according to the Pew Research Center. White people have historically perpetrated racism against Black people for years and the statistics are certainly not in their favor.

There are years of injustices done onto those of color by white people that are cemented into history; a simple Instagram post will not change or affect that. This is where performative activism can be harmful to such movements. It creates a sense of action and togetherness that people of color have been asking for for years.

So next time you go to social media, check yourself. Firstly, with that of being educated. White people need to get informed on these issues, and not just with the information they are comfortable with. We need to expose ourselves to the hard truths, those that include the role white women and men had, and still have, in systematic racism within the United States.

Secondly, listen to Black women and men. How can you be an ally to them? What are they asking for that you can provide? Although fighting racism is a collective action, we [white people] must take a back seat and listen to people of color.

Thirdly, how can you take your efforts off of the internet? There are many different ways to do so, and it is important to do your own research. Although we must listen to Black women and men, it is not their job to tell us what we can do to help. Google exists. There are many different organizations that you can donate to, and a helpful resource is the Mutual Aid Document, which holds multiple organizations and links in regards to information and groups to donate to.

Lastly, let’s just be honest with ourselves. In what ways have you messed up? How can you be better? It’s important to have these conversations with not only ourselves, but with our friends and family.

Ending racism is not and will not be easy. White people, including myself, need to do better but we cannot do so if we do not acknowledge our faults. Performative activism is one of those faults, and although it may not seem so, it is harming communities that have not been listened to for so long. Educated activism is key to better helping people of color and the fight to end racism.