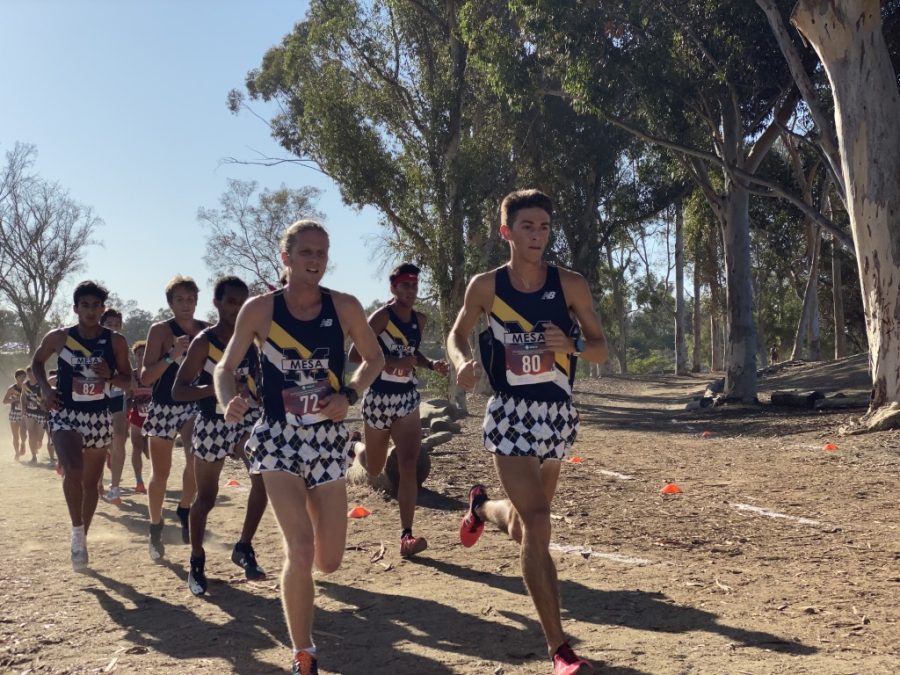 At the start of the race, dozens of runners from each school took their marks at the starting line. Every college in the San Diego Community College District was recognized, including City College, Palomar College, Miramar College, and Southwestern College. After the starting pistol fired, the race began vigorously. After a brief sprint for first position, the runners began to fall into line. The Olympians took an early lead, and went on to sustain their positions through the remainder of the race.

Olympian Bobby Brana explained that Mesa’s group of front runners was no coincidence, but rather a flawlessly executed plan of attack. “Today was a real hot day. I’m proud of my team for going out and sticking sticking to our game plan. You know, the top six staying together packed in. Not breaking up and staying as a team, and being able to work through those four miles. Getting out in the first 400 meters is usually pretty fast because everyone’s trying to get in position. That first mile is everyone trying to take their positions. The guys that are getting up front are getting up front, and the guys that are going to follow, get in behind and make sure that they are in place, not too far behind. From there, it’s settling in and really trying to relax, but not get too comfortable. Going into three – four miles, sometimes it gets a little bit high pressure.”

As the runners began to striate, the results of the race became apparent before the conclusion of the first mile-long lap. By the first corner the Olympians had pulled ahead of the pack, and their leading position was not one to be challenged. Meanwhile, the other contending schools struggled to keep a single runner in competition with Mesa College.

After settling in, Mesa College continued to hold their commanding lead for the duration of the race, leaving their adversaries struggling to keep pace. However, the Olympians managed to maintain their edge over their opponents. By staying together as a unit, Mesa College assured a preeminent victory.

Stefan Rasmuson said, “This race felt really calm, we were in control the entire time. I was mainly cheering on our other athletes, getting them to work as well. In big races I like to stay calm. If you panic too much you can definitely have downfalls. Because running is a very mid-centered sport, if you think too much you can do really bad.”

Luckily, Mesa College stayed collected for a strong victory, easily earning first place in the PCAC conference finals. But they are not yet satisfied. The Olympians’ work is far from over this season.

On Friday, Nov. 8, the Olympians will battle for first place in the Southern California championship at Mission Bay Park. In the weeks leading up to the event, Mesa cross country is feeling confident in their abilities, and focused on their goal.

Isaiah Labra said, “We’re a pretty consistent program in terms of training and we just keep doing everything that we need to do week in and week out. I think that’s going to be the most important part, our consistency. Everything that’s made us who we are right now, we’re just going to keep doing that. We’re excited, we get more competition and bigger things to come.”

Undoubtedly, Mesa College cross country has had an exemplary season, finishing first overall in the Pacific Coast Athletic Conference. Nonetheless, the Olympians are still continuing to strive for further success.

Isaiah Labra hopes that Mesa can make a name for themselves at the SoCal championships. “I think we did a really good job of staying composed and showing that we’re a force out here. People should know of us. People should see that we’re easily capable of going one through seven; we went one through six today, but we’re easily capable of destroying a field like that.”

The Olympians will be running in the SoCal championships Friday, Nov. 8, at Mission Bay Park, where they’ll continue striving toward success.