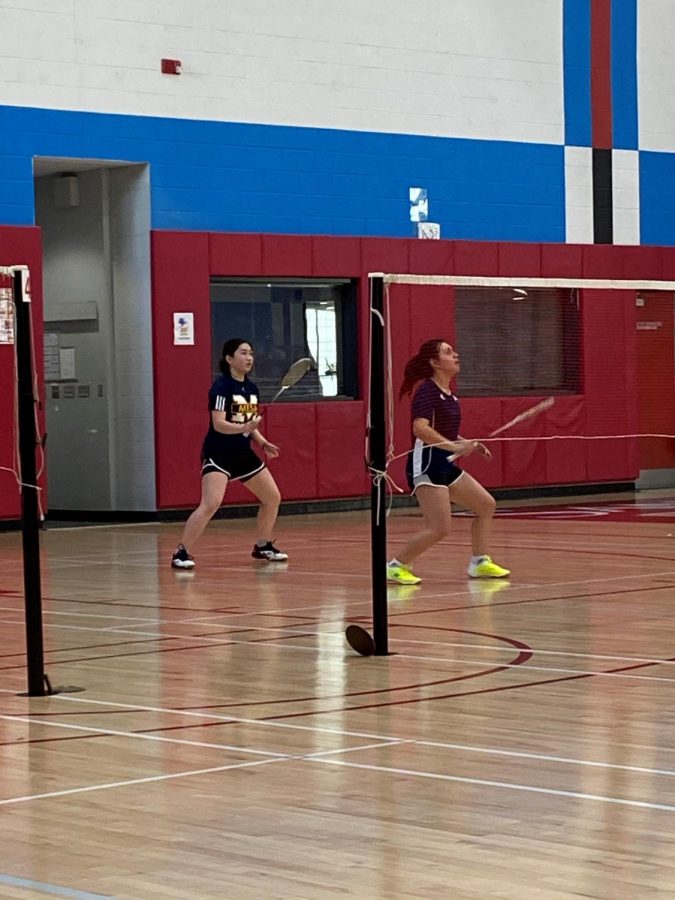 The Olympians started the match strong by keeping the score tied after the first round of singles and doubles at 5-5 (winning a singles game earns your team one point while a doubles victory earns two). Sophomore Thao Nguyen and the Freshman duo of Trisna Nguyen and Melody Pina-Lopez kept the squad in the match. However, the muscle and experience of Yin Ngai and the Knights triumphed in the second round of games as they swept the rest of the games.

With many new faces, the Olympians are presented with the challenge of getting new players ready to be competitive. “We have new people,” says Thao Nguyen, “That is the biggest difference. Rookies can have a hard time gaining experience.”

Last year, Mikayla Aguilar was the top player for the Olympians. However, she is not a full member of the team this season as she is “taking a full load of classes in architecture,” according to Coach Andrews. This makes Thao Nguyen and Lina Messaoudi the only returning players this year.

Nevertheless, there has been progress for the Mesa badminton team.

The stage is all set for Trisna Nguyen and Melody Pina-Lopez to lead the team the rest of the season in singles and especially doubles. The two portray great chemistry when playing together, which is an essential part of being a good doubles team. Even in this tough matchup, Nguyen and Pina-Lopez battled with good communication and constantly picked each other up.

“We are both fun. I feel like we vibe together,” is how Trisna Nguyen described their partnership.

The progress of the Mesa badminton program has been led by Head Coach June Andrews. In a sport that is not the most popular in our culture, Andrews has done an excellent job by growing the team in numbers each year and working with players that do not have much experience.

She wants to prepare her team “to be competitive in every match,” Andrews said. “Just to make it exciting and make it fun by always trying to be in every match.”

A testament to the quality of her coaching is right beside her in Assistant Coach Thai Lay. Coach Lay has also been crucial in the building of the badminton program and is also one of Coach Andrews’ players from back in the day – a great representation of the coaching Andrews has done.

Olympian badminton can be hopeful for the future, too. This year may be about getting players experience, but next year, according to Coach Andrews, Aguilar is probable to return to the team. Andrews and Lay are also actively recruiting at the high school level in search of adding to the numbers and talent of the team. If Trisna Nguyen and Pina-Lopez return along with Aguilar, the 2021 team could be very competitive at a high level.

If interested in attending a match, the women’s badminton team competes on Wednesdays and Fridays for the rest of the season. The team rotates hosting and visiting their conference opponents, San Diego City, Grossmont and Irvine Valley. Their schedule can be viewed on the team’s website at https://www.gosdmesa.com/sports/wbadminton/index.