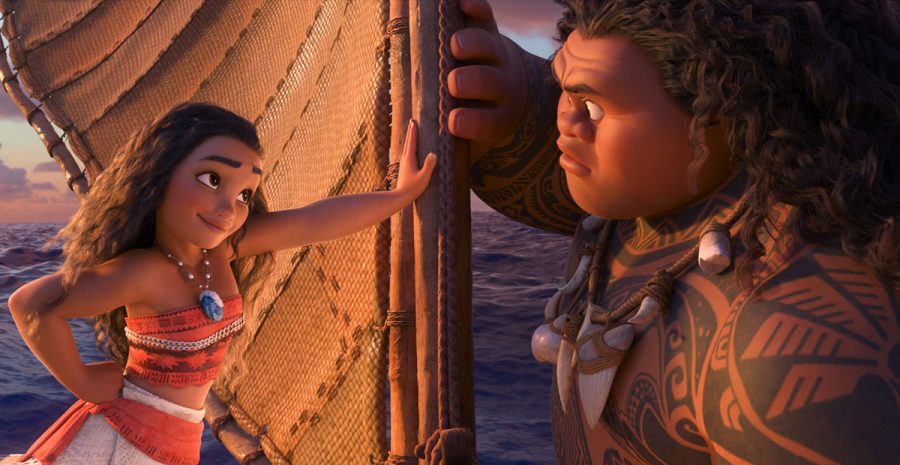 An animated still from the movie "Moana" voiced by Auli'i Cravalho as Moana and Dwayne Johnson as Maui. (Walt Disney Animation Studios/TNS)

After five years in the making, Walt Disney Animation Studio’s highly anticipated film “Moana” finally swept into theaters during thanksgiving weekend. Definitely one for all ages, the film takes place about 3,000 years ago around the Polynesian islands and is about a teenager who is about to become chief of her people. After her island starts to die, Moana played by Auli’i Cravalho, sets out on a forribened voyage into open ocean in search of a demi-god named Maui, played by Dwayne Johnson, who can save her island. Along the way the two battle multiple monsters and are faced with many complications, but are willing to risk it all to save Moana’s village. Overall “Moana” lacked in humor, but there is a few scenes Maui’s sarcastic and egotistical characteristics can cause a chuckle. The film can however be defined as touching, cute, exciting, empowering, and even nail biting.

Directors Ron Clements, Chris Williams, John Musker, and Don Hall all came to make another Disney princess movie with a spin on it. Unlike classical princess movies, “Moana” isn’t about a damsel in distress looking for a prince to save her, but is about a tough, independent female lead trying to fix a problem and find her place in the world. In the movie she even denies the idea of being a princess when Maui pokes fun at her. Much like one of Disney’s more recent films “Frozen” (2013), we see a shift in the way these new Disney princesses act and it sets a good role model for young girls. Moana also is based off of Polynesian culture, bringing even more diversity to the princess line up. Without creating any spoilers the ending is very empowering and significant to the theme throughout the movie.

Within its first week “Moana” has brought in about $82 million to the box office. Critic site Rotten Tomatoes gave the movie a rating of 7.9 out of 10, while IMDB gave it an 8.3 out of 10. Even though Moana follows “Frozen” in a way the song are nowhere near as good. They are still however catchy enough to leave you humming later in the day. “Moana” is one of the better animated films of the year and definitely one to see, but keep in mind it is no Shrek.