Fantastic Beasts: a crime against the Potter universe 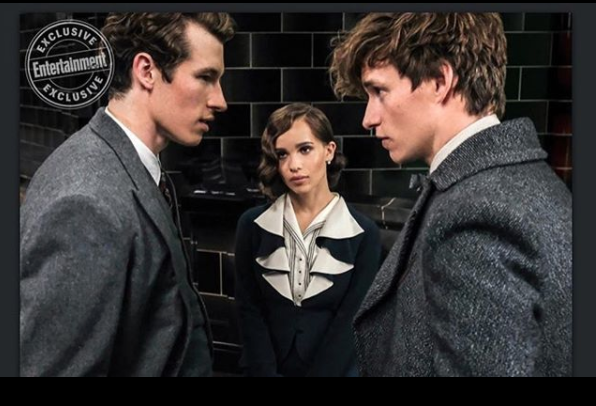 By all indicators, “Fantastic Beasts: The Crimes of Grindelwald” is a commercial success.  According to its Wikipedia page, it “has grossed over $272 million worldwide” from its Nov. 16 release date, and seems to be doing well. Yet one could sincerely argue that this film sullies the Wizarding World it tries so hard to be a part of.

“Fantastic Beasts: The Crimes of Grindelwald” is the second installment in the prequel series “Fantastic Beasts;”  the series is a prequel to the “Harry Potter” franchise and screenwritten by J.K. Rowling. Also connecting this film to the ”Potter” universe is its director David Yates, who has also directed 4 of the ”Harry Potter” films.

Just a warning for viewers who haven’t heard of this series: This movie will not make sense unless one watches it’s predecessor, ”Fantastic Beasts and Where to Find Them”.

Unfortunately for “Harry Potter” superfans who might relish in the idea of an ever-expanding “Harry Potter” universe, the film falls flat of expectations from its highly anticipated release.

Arguably, the casting of this film’s major protagonists are the only thing that make this film enjoyable.

Johnny Depp plays a phenomenal Grindelwald in capturing the essence of a cunning megalomaniac, while Jude Law’s heartfelt rendition of a younger Dumbledore is everything you should expect a younger Dumbledore to be. Eddie Redmayne’s near spot on execution of the main character, Newt Scamander, was one of the movie’s few redeemable qualities. And admittedly, the film’s opening was rather remarkable; Grindelwald escaping from the carriage meant to transfer him from the U.S. to London was the perfect setup for the film, complete with stunning visuals and a Depp performance that leave you wanting more.

It all went downhill from there. The eye-grabbing CGI and beautiful sets notwithstanding, this film’s inability to focus on one thing -anything- is what ultimately killed the film’s attraction.

Countless sublot after subplot is thrown at the viewer, who is given no time to process any of them. Between nonsensical dialogue the characters engage in that seems random at most and the noise of subplots, dramatic tension is never given a chance to take hold.

The narrative of the movie is moving so blindingly fast, in fact, that eventually the only real plot the viewer can keep track of is the narrative repeated by Credence (Ezra Miller), which is to find his birth mother and his true identity. That too, didn’t deliver on the climatic ending that it should’ve; the viewer is left with news that seemed conveniently delivered as a plot structure for the next prequel.

It’s safe to say that “The Fantastic Beasts: Crimes of Grindelwald” somehow fantastically had everything and nothing going on at the same time.

While some might argue the the plot would make sense if one were to watch “Fantastic Beasts and Where to Find Them”, that does not explain why the relationships between the characters have changed so much. Besides the time jump between them (the first prequel set in 1926 and the second set in 1927), one year is hardly enough time for so much to change.

For instance, Credence’s Obscurial powers – what happened between the havoc the wreaked in NYC and arriving in Paris? And how did and Nagini (Claudia Kim) come to know each other?

In addition, because the movie made it unnecessarily hard for the viewer to focus on something, it effectively obliterated any type of relationship the viewer had with any character or even a relationship between the characters themselves. To say that character development was lacking would be an understatement. In one particularly abysmal scene, tragedy strikes one of the main protagonists, and it is hard to even sympathize with him because he is seen all of 3 times.

The nonsensical dialogue between characters that could’ve served to build chemistry between the heroes of the movie only nailed the movie further into the coffin. Even the few characters that had the potential have more solid backstories, like Leta Lestrange (Zoë Kravitz), were neglected to make sure every character, including the unimportant ones, had a backstory.

If you’re a “Harry Potter” fan that likes impressive CGI scenes and a few good characters that drop Harry Potter references just enough for anyone to understand, then this is the movie for you. Otherwise, the biggest crime “The Fantastic Beasts: Crimes of Grindelwald” will have committed is wasting your time and money.