Holiday traditions from those around us 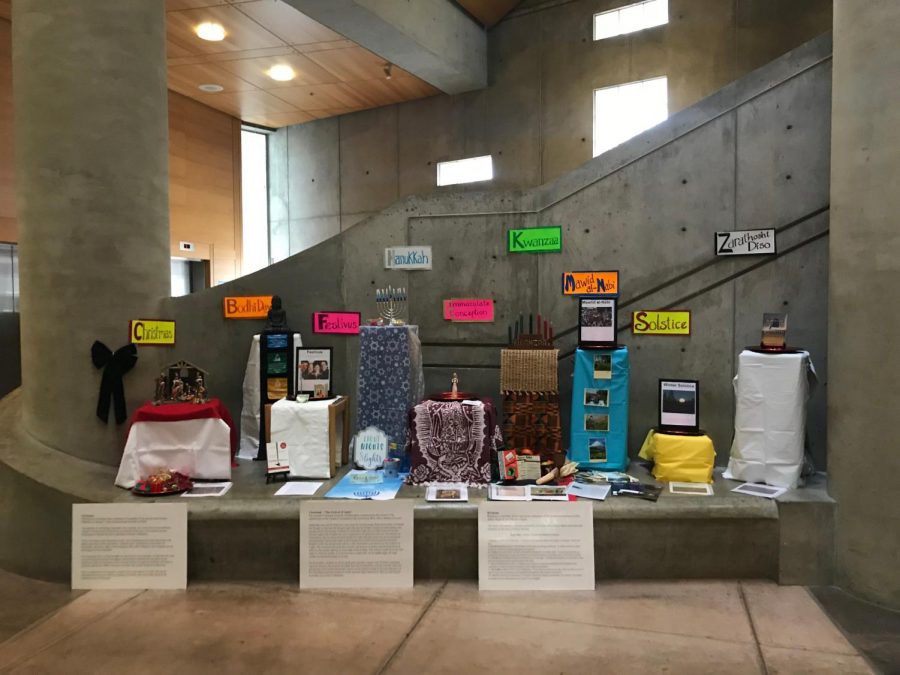 Different holiday traditions and stories displayed at the LRC building.

With the holidays approaching, San Diego begins to transform its environment and so does Mesa College.

Mesa prides itself for having students from different cities, states, and even countries, meaning that our campus is filled with many different traditions for the holidays. Each religion, country, and family carries a different tradition and way to spend this time of the year.

Baking cookies and decorating the tree for Christmas, or lighting the candles on Hanukkah are not the only traditions for this time of the year. Devan Spiegel, a Temecula-born second-year student at Mesa, told the Mesa Press about her many traditions her family has held since she was a kid. “When my sister and I were younger, my parents would take us on a drive around Temecula to drink hot chocolate and listen to Christmas music and look at lights,” she said.

Devan added that when she was younger, Christmas was celebrated at her house, where her dad would hold the “Christmas Olympics” and he would create teams within her family. “I have a big family,” she added. “There would be competitions and prizes, and it was always a lot of fun.”

To Devan, Christmas is a special holiday to herself and her family. “We spend time together, but we are not religious whatsoever,” she explained, “so I guess it isn’t important to us in the ‘typical way’ Christmas can be important to other families.”

Ethnicity also plays an important role in some students’ traditions. For Karl Diaz, “being a first-generation Filipino-American puts tremendous pressure on me as some type of ‘preserver’ of my culture.” To him, and his culture, Christmas is “one of the biggest, if not the biggest, holiday” as he puts it. He tells that in the Philippines, it’s common to see Christmas spirit and season spread starting from September all the way to December. “We like to call these ‘-ber’ months,” he said, “ since they all end in -ber.”

Some of his family traditions include keeping their houses festive with a “parol”, or Christmas lanterns. Some of the Filipino season holiday food also take part in these traditions, such as “queso de bola”, a ball of semi-hard cheese, or desserts like “bibingka”, a type of coconut cake. Frequenting churches is also one of his family’s customs, to attend “Simbang Gabi,” or “Night Mass.”

Ivan Liniado, a student originally from Buenos Aires, Argentina, grew up with traditions that revolve around Hanukkah and new year. “I am Jewish, so I don’t celebrate Christmas or do anything Christmas related,” he said. “I also don’t do much for Hanukkah,” he explained, “but I do like to get together with my siblings and light the candles every night.”

One of the traditions his family has always had is eating twelve raisins, or grapes, at midnight on new year’s, a very common tradition in Argentina that symbolizes prosperity and good luck for the upcoming year. “We also always have a big dinner, where we go around the table and say what we hope and want for the new year.”

To Ivan, this time of the year is special, as he gets to go back home and reunite with his parents, grandparents, and friends from high school. “I see my family and friends throughout the year, as I get to travel,” he said, “but seeing them during the holidays is a different feeling and environment.”

Just like Ivan has traditions related to his home country, Argentina, Lilian Campagne, a second-year international student, has some traditions that are typical from his home in Lyon, France.

Christmas plays an important role in Lilian’s life. During this time of the year, he has a huge meal with all his family and eats oysters, and a typical French dessert served during Christmas time, called ‘yule log’. “We eat it to celebrate the start of the winter. It’s like a chocolate cake, but in the shape of a log,” he explained, and added that “everyone does that in France.”

Lilian grew up with many stories and customs that surrounded Santa Claus. After dinner, they have to go to sleep, and can’t wake up before the sunrise because “we believe that Santa needs the whole night, passes by the chimney, and all the presents are on the bottom of the chimney”, he said. When asked if he had any stories related to Santa Claus, he laughed and said “Yes. If you don’t put out the fire before going to sleep, my family believes Santa is going to get burnt, which also symbolizes bad luck for the upcoming year,” he explained.

Stories like those are typical in France, but his family, in particular, believes that Santa Claus always leaves a gift behind him, as a witness of his passage. “In my family, he leaves a reindeer wood every year, that my grandpa actually buys at the zoo,” he said while laughing.

Devan’s, Karl’s, Ivan’s, and Lilian’s traditions are only some of the few customs that our students and their families have, and although they are all different, they are unique and special in their own ways. Whether the traditions are new, old, first or third generation, religious or non-religious, they are what make the holidays arguably the best time of the year.