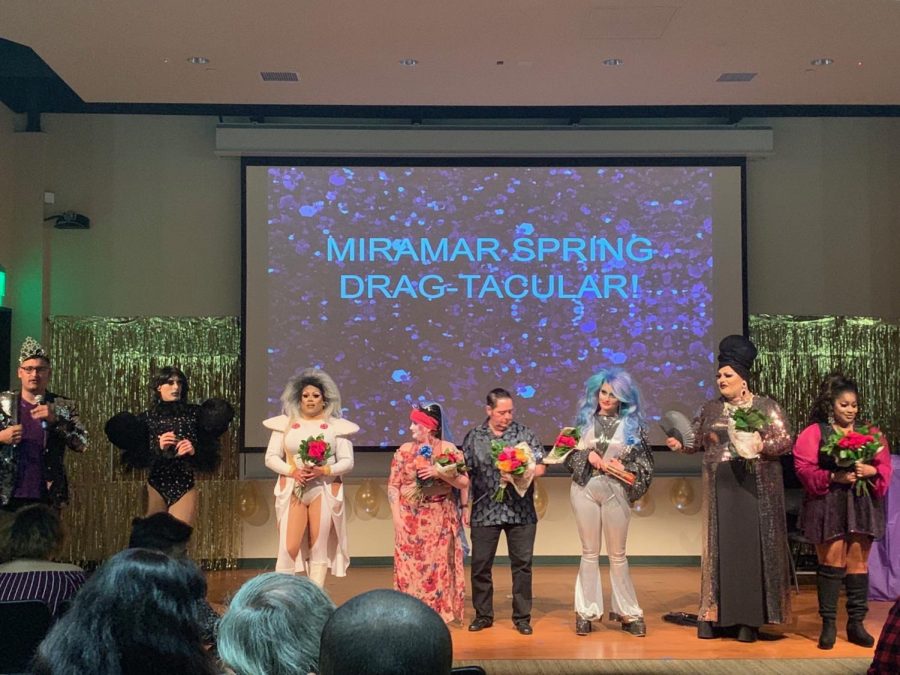 On March 20, San Diego Miramar College hosted “Life in Drag: History, Performance, and Discussion,” the first ever drag show hosted on campus. The evening consisted of family-friendly performances by six local professional drag queens and a drag king as well as an informative Q&A session.

Miramar’s Associate Dean Benjamin Gamboa opened the show with a powerful welcome message, speaking to a crowd of about 100 people. “We have some wonderful faculty and staff administrators who support you here in the audience today and I want you all to know that I see all of you, I acknowledge you, and you belong here,” Gamboa said. He added, “Miramar this year is celebrating our 50th anniversary, but this drag-tacular represents a rebirth for Miramar in welcoming students of all types. Wherever you are, however you are, you are here and you belong here.”

The event, which was hosted in Miramar’s auditorium, had free admission, though donations were accepted for LGBTQ scholarships and student support. Among the performers included Vanity Jones, who also acted as one of the hosts. Jones and several other featured performers can be seen in drag shows in the Hillcrest neighborhood, the buzzing center of San Diego’s LGBTQ community.

The audience consisted of a diverse group of people. Men, women, and children alike enjoyed the vibrant energy of the performers. All performers were highly interactive with the audience, inciting laughter and smiles throughout the night. One drag queen, known as Mercury Dee, sat on the lap of an audience member during her act. Another, Delicious Jones, caressed faces and sat among the crowd as well.

The last set was reserved for Vanity Jones, providing a fittingly extravagant ending to the show. Jones’ riveting routine included somersaults through the middle aisle of the audience. She also recruited a young girl from the crowd to dance on stage with her.

The night was as informative as it was fun, showing multiple videos on topics such as the history of drag culture, the drag king art of male impersonation, as well as a video offering a bit of background on the local drag group, The San Diego Sisters of Perpetual Indulgence (SPI).

The videos, along with the open Q&A session, provided important insight into issues within the community and offered a night of educational fun for both those new to drag culture as well as avid lovers of the art form.

One of the questions posed during the interactive session asked the performers what the biggest misconception of drag culture might be. Drag queen Barbie Z joked, “That we all work at Lips!”

Jones chimed in for clarification, “We do not all work at Lips … There are bars, there are brunches and clubs that we all perform (at). We also do a bunch of benefit shows to help everyone in the community, as well as outside. A lot of the time we just come together to raise money … kind of like what we’re doing here for the school,” she said.

Drag queen Sister Develyn Angels, who is a member of both SPI and the local drag king group, the San Diego Kings, mentioned that she is predominantly confronted by people who are unaware that SPI included women. “People (are used to seeing) gentlemen in drag since it was started by gay men,” she explained. “We come in all sizes, shapes, so that’s actually a big misconception.”

Angels also touched on the origin of her drag name. She began with her inspiring personal story as a survivor of Crohn’s disease and how drag has helped her through such a difficult time. “I fight daily with the demons of being a patient with chronic illnesses. But, also being the angel for others who are like me and saying ‘You can have a life, you can live, you can be strong, you can be independent, you can find love.’ Which, through drag, is how I found the one at the very end.” Angels gestured to drag king Rudy, who was seated at the opposite end of the stage, the audience cooing in adoration.

At the close of the show, Jones gave recognition to all allies of the LGBTQ community. She urged all parents, friends, and spouses of anyone in the community to stand. “I want to recognize all of you for your love and support. A lot of people in older generations of drag kings, queens and performers grew up in an era where we did not have many (supporters) and struggled on our own. So, to see family members here, it always warms our hearts,” she said.