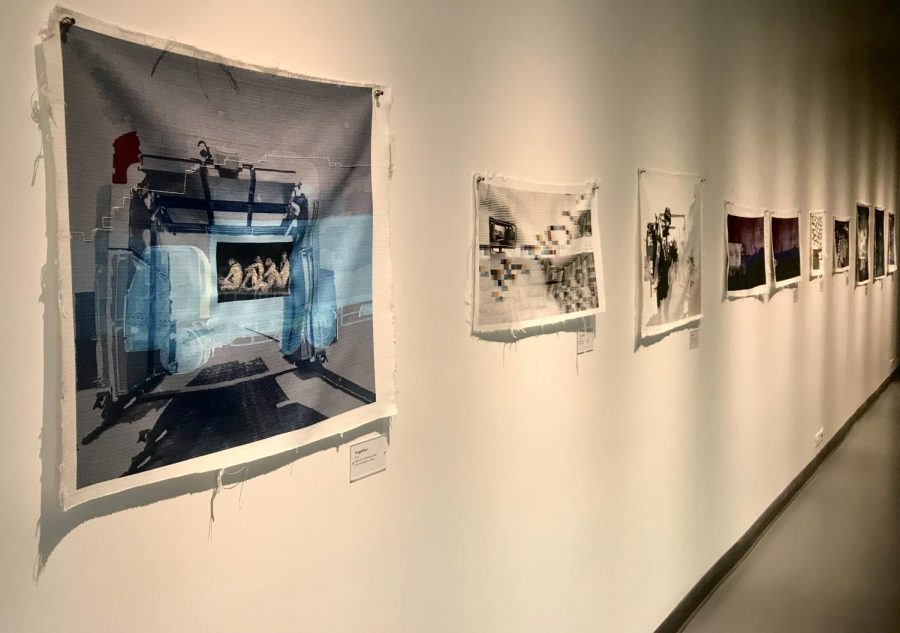 Forced Exodus compares the commonalities between the Underground Railroad and undocumented immigration.

In light of Black History Month, Mesa College presents Joe Lewis’ Forced Exodus: Coded Messages from the Underground Railroad. The exhibition, located in FA 103, takes a look at the experiences of Black slaves during the 1850s, illustrating the momentous and dangerous historic event that is the Underground Railroad. Simultaneously, through his use of assorted mediums, Lewis showcases the comparison of the escape of slaves to freedom with the journey of undocumented immigrants today, telling a story of bravery, tradegy, and liberation.

Using a technique called “digital dye-sublimation,” the images Lewis uses to create his art are often obtained from news and media outlets, to which he then alters, distorts, and prints onto white linen cloth. Details are embroidered on after. Using this method, Lewis has created several eye-catching pieces to tell this story and paired with the woven testaments to the Underground Railroad are ghostly x-rays of present day smuggled people, migrating from Mexico, reminding viewers that the endeavour for freedom and justice amongst people of color are far from over.

While the two stories are very different when told separately, the parallels in regards to the social and economic hardships that play and played a part in both cannot be denied.

In his artist statement,  Lewis says that, “The artworks examine relationships between active and historical oppression of people of color using a multifaceted framework of community values and belief systems – flashes of spirit to illuminate self-determination – while also positioning ‘cultural voyeurs’ as participants.”

Along with the woven pieces in the show, there are also Ghanaian Kente cloth and kevlar creations that according to the curator of the exhibit (get name tomorrow), “speak to the criminalization of Black youth and the violence that they experience.” As well as a bright neon sign displaying the words “Negritude,” paying homage to a political and literary movement started by Black students in Paris during the 1930s.

When asked what he hopes people will take away after viewing this exhibition, Lewis said, “I would hope that people would take a closer look at history and see their relationship to what’s happening today. We tend to think these situations only happen to a certain group of people, but if we look historically, they happen to a lot of different kinds of people.”

According to the curator’s note, Lewis has had his work featured nationally as well as internationally, in places such as Texas, New York, and Mexico as well as Iceland and Singapore. He also collaborates with other creators such as musicians and designers to propel his artistic ideals forward. Lewis has led in public art projects such as the Chandler Outdoor Gallery Project and was a part of NEA Urban Studies and Conceptual Art C.A.P.S.

To learn more about Joe Lewis or to see more of his powerful creations visit, www.joelewisartist.com. The exhibition will be open for public viewing until Feb. 27.