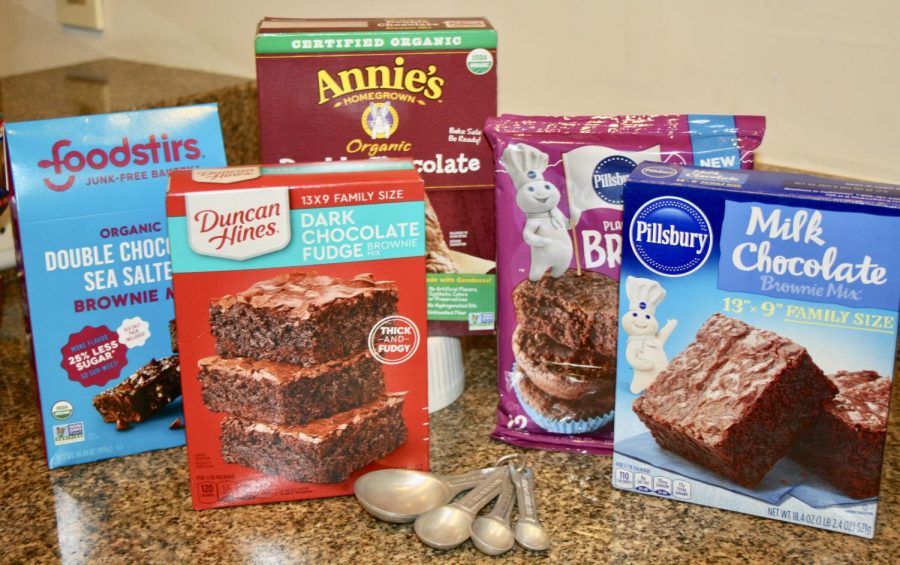 Since the Covid-19 stay-at-home order started March 20th, homebound people are busy baking sweet treats for themselves, which is obvious by looking at the ravaged cake and cookie mix shelves in the store. I went to pick up a box of dark chocolate Ghirardelli brownie mix that I know is delicious, but with none left on the shelf, I wondered which brownie mix would be as good as Ghirardelli, to indulge my chocolate cravings.

Ghirardelli Dark Chocolate boxed brownies are the gold standard for brownie mixes, so they’ll still be included in my comparison. The Ghirardelli brownie has a rich dark chocolate flavor that’s not too sweet with a density that’s not too fluffy like cake. It’s not too solid and has a wonderful aroma, as well as the perfect combination of moist chewiness with a lightly crisp top and edges. It would be delicious plain, but with solid, quality chocolate chips, it goes beyond – these are the best brownies from a mix so far. Let’s see if the five new boxed brownie mixes can measure up to the Ghirardelli brownie mix.

My first bite of the Pillsbury Milk Chocolate brownies was an airy, fluffy one that makes this more a cake than a brownie. The crust of the brownie was a well-balanced bite of crispy and chewy, and the milk chocolate flavor was sweet and subtle.

Before I even took a bite of the Pillsbury place-and-bake brownie, a strange odor of metal like an old tin can, chocolate, and chalk wafted up from the circular brownie. I questioned whether or not there was actual chocolate in there; it reminded me of Tootsie Rolls. And just like the tootsie rolls that you’d only eat weeks after Halloween because they were the only candies left at the bottom of the plastic pumpkin, these are last-resort brownies. They don’t taste like chocolate, but they’re sweet. A six-year-old may have eaten the tootsie rolls but a grown-up should not bother eating these brownies. They tasted just like they smelled, and visually they look like the six-year-old made mud pies. I usually appreciate creative ideas that break the norm, but the circular shape just reminded me that the Pillsbury refrigerated brownies barely qualify to be in the brownie category and don’t deserve to be in the company of the boxed mixes.

My expectations were low for tasting Annie’s Organic Dark Chocolate brownie mix, having tried another Annie’s Organic product in the past, the boxed mac n’ cheese. Is that yellow liquid supposed to be cheese? I predicted similar characteristics for the brownies – weak flavor, and a questionable texture. I was prepared to call these brownies “earthy” or “healthy” because of the brown box with green text, but I kept an open mind. This is the only mix that you need to add butter to make, and you could really taste it, along with a deep cocoa flavor – delicious. The brownies were dense with a great chewy texture. Annie’s brownies tasted almost like homemade. The boxed mix cost $6.50, more than double the two Pillsbury packages and the Duncan Hines, and it’s totally worth it.

The Foodstirs “No Junk” brownie mix contains 25% less sugar than the other brands, and I would have never known by tasting them. The double chocolate brownies with sea salt have a wonderful rich chocolate flavor, and they’re chewy and crispy. Sprinkling sea salt on chocolate is a trend that needs to end. It has no benefit for the flavor, and it’s not pleasant to crunch down on, when you take a bite. This brownie mix costs $5.50 a box, and it’s money well spent.

The quality of the five brownie mixes went hand in hand with the price. Annie’s and Foodstirs were equally delicious, while the other mixes which cost under $3, prove that you get what you pay for. The question remains, are any of these brownie mixes better than the Ghirardelli brownies from a mix? It’s a tough call but Ghirardelli’s is still the winner. Annie’s brownies are a very close second place, Foodstirs comes in at third best, and the Pillsbury mix and Duncan Hines mixes can’t even come close to competing with the others. The Pillsbury refrigerated place-and-bake brownies are officially the worst brownies I’ve ever had, without a doubt.

If the stay-at-home order continues, there’s going to be a lot more time for baking. With my chocolate cravings satisfied, I’ll have to see if there are any frozen pies still left on the store shelves, and continue my research.