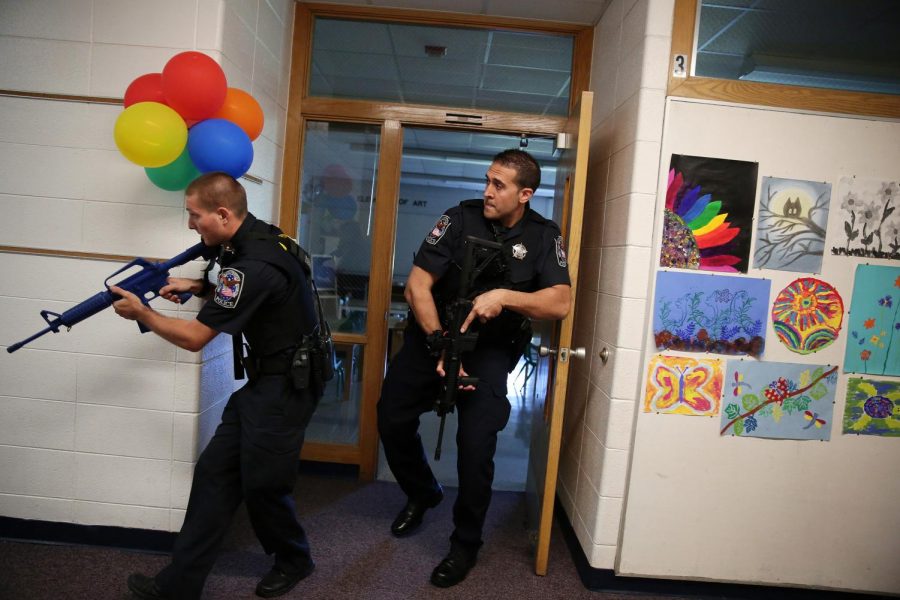 A bottle of Dasani water, an iPhone 11 Max, wireless headphones, a Herschel backpack, a highlighter, and a handful of black pens – not exactly the ideal defense against someone with a gun, but it’s all I have.

Learning how to respond to an active shooter in a classroom setting has been the most unusual piece of information I have acquired at my community college. Even more jarring has been the response from my classmates – or lack thereof. Rather than digest this potentially life-saving information, the newest photos on Instagram take precedence. Staring into their phones, inured to the reality of mass shootings in America.

A 2006 high school graduate and late bloomer to higher education, I began college in 2018. During those 14 intervening years, over 250 school shootings occurred. And the survival advice shared by the birthplace of knowledge: Grab something you can throw.

But to be clear, this lesson isn’t being created by a professor.

And while Navigate360 should be given respect for picking up the slack of America’s gun obsession, it’s to be questioned if placing this dangerous burden on students and school faculty is truly the best that we can do.

San Diego Community College District Police Chief Joseph Ramos stated the importance of ALICE Training for potential victims, “All of it has to do with being in denial, being in shock, not recognizing what’s going on and not realizing that they have some options and they need to make some decisions quickly.”

Ramos, a former San Diego Police captain and SWAT commanding officer, has been following this topic for twenty-plus years including teaching at the corporate level, speaking at the FBI National Academy, and providing training to law enforcement agencies in San Diego County on active shooter response and management.

According to Ramos, the district has a team of instructors, led by a sergeant, who attend training and then relay those messages to campuses several times a year. The meetings are open to all faculty and staff with the objective of offering options in the case that they are faced with an active shooter situation.

However, this training is not required and has left some faculty and staff unsure of their ability to act as the campus’ first line of defense.

A Mesa professor, who will not be named, shared that they have been hesitant to take the course. “I have been told that it has very realistic elements that can be unsettling.” They continued to state that they have researched such training and plan on taking it so that they are better equipped should such a threatening situation arise. “As a student, I would feel unsure of what to do in this scenario and would feel safer knowing there was a protocol in place,” they explained.

They also recognize that, as a professor who is hired to encourage growth in learning, facing such a tactical event may not come easy. “I would hope that I could be a strong leader for my class, but I also worry that I will not make the right call due to stress, lack of training, or bad timing,” they shared.

Mesa Health Services’ Licensed Clinical Social Worker Linda Gibbins-Croft spoke to this apprehension by discussing the body’s natural response to fight, flight, or freeze in the face of danger. “There are ways to intentionally move oneself into a thinking process and help move conscious choice back into the mind,” she said. She also acknowledged that rational thought doesn’t always prevail. “There are just some situations when this doesn’t go as we would like, and a person moves into a more chaotic state.”

It’s because of this that attempting to get away should be prioritized; facing the shooter is the last resort. Ramos explained that this controversial element of ALICE is traditionally not taught to students because of the likelihood of students or faculty being hurt during the confrontation. But the reality is that it can take several minutes for police to respond and these situations tend to be over in several minutes, so educating the public on their emergency options is crucial.

“People need to have an honest conversation with themselves, their spouses, their children – if they are at an appropriate age – that unfortunately, this is a reality in the world we live in,” Ramos stated. “Take the classes if they’re available to you, look around and have a lockdown and/or an exit plan, and if it’s your only option, prepare to fight!”

Reflecting on all that I have learned about ALICE Training, I can’t help but wonder how I would react if I was met with that last resort. Sure, I can say that I would grab the heaviest projectiles in my reach. Loud, distracting noises could be used to confuse the intruder – if only long enough to tackle them. And then suddenly, anger rushes over me as I realize that I am no longer simply responsible for learning – I’m now responsible for not getting shot at school, as are my professors and classmates. A dark, but honest truth in America.

The most infuriating aspect of all of this is that it took the COVID-19 pandemic to address it. With stay-at-home orders shutting down schools, the likelihood of being shot during a campus lecture has vanished. For two months, students and professors in America have been able to simply focus on schoolwork.

But campuses will reopen and then it’s back to preparing for the potential threat. And I still can’t decide which is scarier: comprehending this as a reality or accepting the reality that nothing has been or will be done about it.