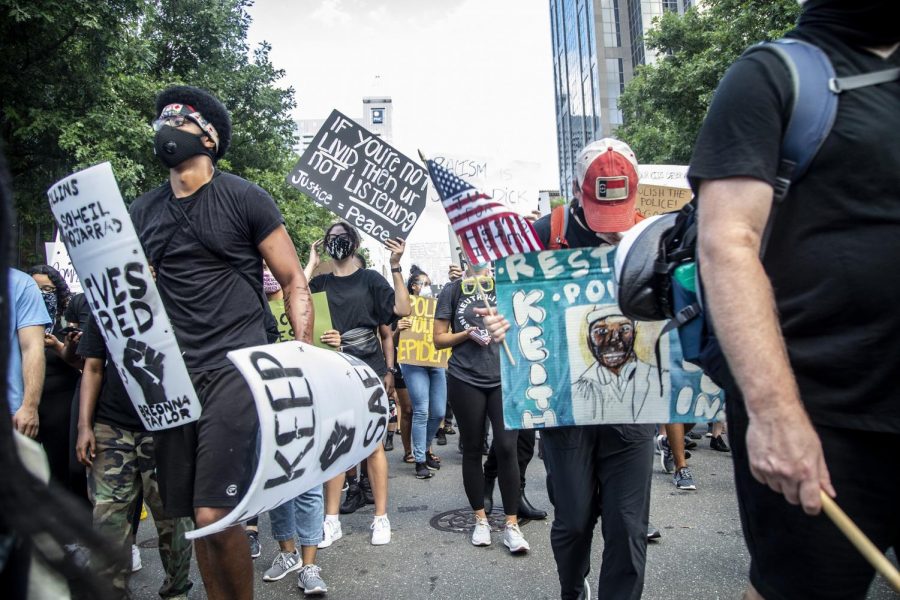 Demonstrators march and protest against systemic racism after the police shooting of Jacob Blake.

Propelled by Protest, a student-led initiative inspired by the recent killings of black individuals by police officers, met for the first time on Sept. 2 via Zoom to host a dialogue for black students to share their experiences and advocate for change.

The project plans on being a series of forum-style discussions facilitated by students Princetta Readus and Tyrell Williams, both communication studies majors at Mesa College, in order to perpetuate the call for social justice. Assuredly, it is an event open to students, faculty, and staff alike, however, it was made clear from the beginning there is a special emphasis on student leadership and participation.

“It’s just really about getting students knowledge and information that I don’t think they have a lot of access to,” Williams said.

While “protest” is in the name, the group stressed the fact that they are much more than a political machine.

Veronica Gerace, a professor of communication studies and a program developer for Propelled by Protest, explained that while the project was propelled into existence by the protests which took place over summer– more specifically, with respect to the outcry over the killing of 46-year-old George Floyd — the physical act of protesting is just a portion of their undivided praxis, albeit an important aspect.

“Some people just march and then they go home,” Gerace said, going on to assure that their project is about much more than passive participation.

Of course, the initiative advocates for change through political means — that is, through voting and protest — and they make no secret of it. However, the group is insistent that the issues they are responding to reach far outside the bounds of trivial political differences.

“I just got an email a minute ago, and someone was trying to explain the reason behind Propelled by Protest,” Edeama Onwuchekwa, Equity Librarian and one of the faculty coordinators of the event, said, “and one of the things the person said was: it is to encourage students to be involved in politics.”

At first glance, it might be easy to see why the aforementioned person of Onwuchekwa’s reference views this initiative in such a way. However, as Onwuchekwa went on to emphasize, and as others echoed throughout the event: “It is beyond politics… Propelled by Protest is about information.”

Readus made that sentiment clear. Placing a notable emphasis on the importance of mental health awareness for students within the context of the chaos of recent events, Readus cited Propelled by Protest as a valuable outlet and source of information. “I know with students, they’re struggling with more anxiety and depression with what’s going on, so it’s more of a safe zone for them to come to feel like everything’s okay, ask questions, and check in with their mental health,” Readus said.

Throughout the event, a theme of information and education was repeatedly discussed and displayed. On one such occasion, a student asked how they might be better able to help out being a person of different ethnicity and color. Responses followed over the course of the whole event with a general theme, expressed the best by Williams: “This is a movement for all of us.”

As hopeful as the initiative is in their open-forum dialogue, the fact remains that protesting is still a vital aspect of the project’s genesis, and for individuals and students who attended the event, a reliable subsequent course of action.

“Protesting is not a dirty word,” Judy Sundayo, a counselor at Mesa College and a faculty coordinator of the project, explained. “There are those in certain places who would have us believe that protesters are the same as anarchists, that all protesters are violent, that they want to overthrow the government, that they are revolutionaries, and all of that.”

According to Williams, those violent forms of protests of the kind in Portland and Seattle only manage to shed a negative light on what movements like theirs are all about.

“With all that looting and violence, it comes then to them blaming black people in the protests,” Williams said, “when it’s really just a lot of people who aren’t a part of the protest taking advantage of the chaos.”

Additionally, with a general election on the horizon and with all of the boundless uncertainty, Williams, Readus, and others made sure to emphasize the project’s focus on encouraging student participation and voting.

The next Propelled by Protest meeting will be held on Sept. 16 at 5 p.m.via Zoom.