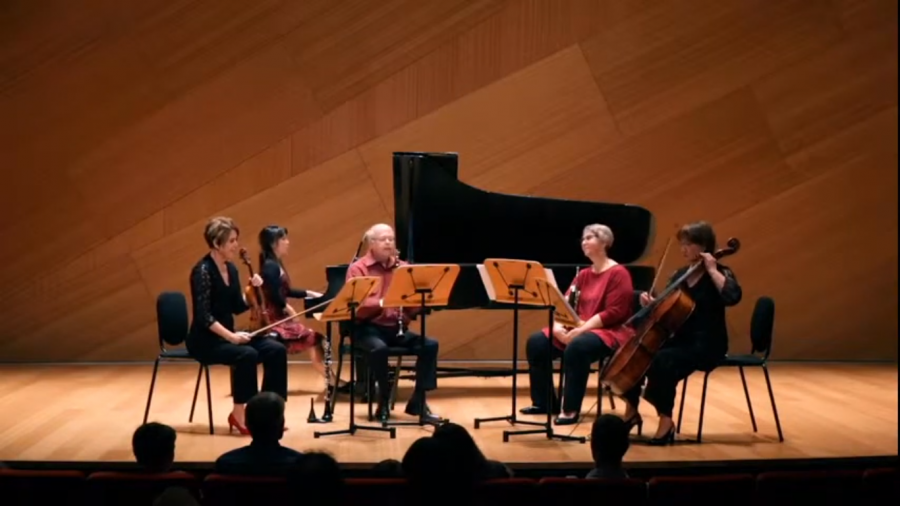 The event was coordinated by Music Department adjunct faculty member and Guitar Ensemble Director, Ian Bassett. Known as the Free Virtual Recital Hour, the Mesa College Music Department used to hold these performances in person, before COVID-19 restrictions required an online format, according to Bassett. In this case, the concert was made available for public viewing via a YouTube livestream, accessible through Bassett’s own channel.

“Recital Hour,” Bassett explained, “is a class in the Mesa College Music Department directed at educating budding musicians on different musical styles they may not have been exposed to during their personal study of music.”

According to Bassett, Nykter is a prolific Finnish-born chamber musician and recitalist, well-versed “with standard repertoire as well as contemporary music.” In an interview held by Bassett after the performance, Nykter said she started playing at the age of nine and went on to study at the Sibelius Academy in Helsinki. “Päivikki is one of my favorite performers we invite to Recital Hour,” Bassett said. “You’ll notice she is always on the schedule. She is very generous with her time, her enthusiasm is infectious, and her skills are top-notch.”

Zelickmen started playing the clarinet at the age of 10, however, his musical roots go deeper still.

“My experience with music was even before that,” Zelickmen said, “my mother would take me to concerts since I was 4 years old…I would go to symphony concerts.”

With a bachelor’s degree in composition and a focus in film scoring, Zelickmen also has a master’s in clarinet. He insists that he always knew he wanted to be a musician. “I was always interested in music, I always knew what I wanted to do with my life,” he said.

The Recital Hour setlist consisted of two pieces, both featuring Zelickmen and the last featuring Nykter.

The first piece, “Trio for Piano, Clarinet, and Horn, Op. 274,” a composition by the German composer, Carl Reinecke, featured Zelickmen accompanied by two other musicians respectively on horn and piano. The last piece performed, “Quintet in D Major for Violin, Clarinet, Horn, Cello, and Piano, Op. 42,” a piece by the Czechian classical composer, Zdeněk Fibich, featured both Nykter and Zelickmen as well as three other musicians playing horn, cello, and piano.

The style of music Nykter and Zelickmen played for the Recital Hour is known widely as chamber music. Under the umbrella of classical, chamber music is traditionally composed of small groups. In a sense, any group that could collectively fit into a small room or chamber.

While classical music and chamber music are certainly featured in Recital Hour performances, Bassett assures that it is not necessarily a requirement or a recurring theme. Bassett explains, however,  that there is a common thread throughout the idea of Recital Hour.

“I personally, as well as my department, also view Recital Hour as an opportunity to support LGBTQ+ artists, black artists, women artists, artists from countries other than the United States, as well as anyone who produces a musical and/or cultural style different from what we study in music academia,” Bassett said.

In light of the present circumstances COVID-19 has presented the general public, the Mesa College Music Department will not hold any in-person performances. “Our ensembles did diminish in amount offered,” Bassett explains, “but the students have had to focus on contemporary skills with computers that are directly applicable to what they will be doing in the future. For Recital Hour, I’ve had to learn new skills such as livestreaming people I am not in a room with.”

Although it is a challenge, Bassett argues it is not necessarily a negative. “If anyone reading this article is interested in music as a career, now is the time,” he insists. “Music is something you can absolutely do from the comfort of your own home and get excellent guidance similar to in person.”

The next Recital Hour performance, featuring the music of Andrew Bustamente, will be available for public enjoyment live on Oct. 7.