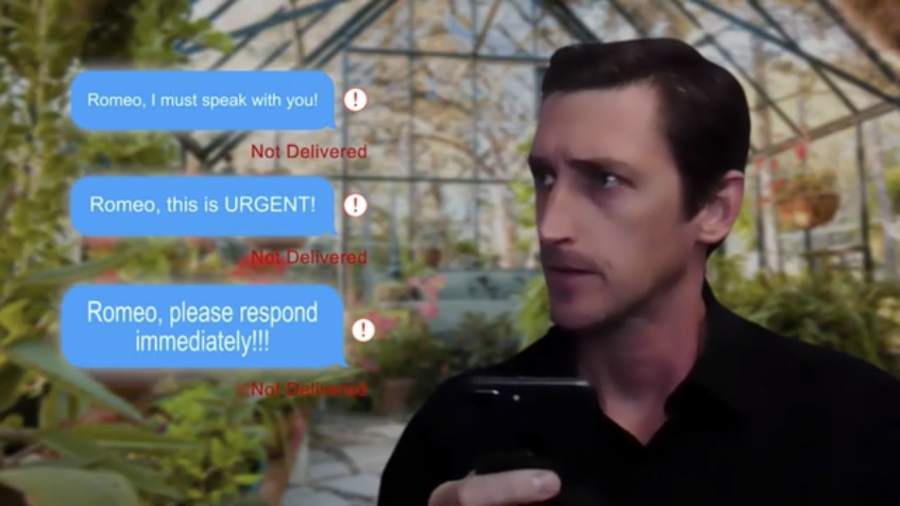 Friar Laurence (Nick Mayer) urgently texting Romeo of his whereabouts and wanting to speak to him.

San Diego Mesa College’s Dramatic Arts Department takes on a different style to their virtual performances. This was displayed in their recent play of Shakespeare’s timeless classic, “Romeo and Juliet.”

With the all-known classic tale, the department’s abridged version of the play explores the unique challenges of finding true love and the dependency of a good internet connection. The play was quite unique since the performance was filmed and all of the behind-the-scenes production that went into it. It had a mixture of a movie-driven story with an appearance of a live performance.

Joshua Penrod, who played Romeo, shares his take of the overall virtual performance experience, “For me personally, doing these shows was like stepping into a sort of ‘lost world’ where we all, as actors, had to speak dialogue to one another through a laptop screen without much room for movement, and each show presented new tech challenges for me.”

Comparing this performance to the department’s last production, “Tales of Terror,” Penrod said that “‘Romeo and Juliet’ was completely filmed scene by scene prior to being compiled, edited, and eventually posted on YouTube.” He added that live acting and film acting produce different things. “You can approach them similarly with similar acting techniques, you have to treat them as if they are two different processes because they really are. And depending on how you approach them, that can affect the final product in the end.”

The performer explains the different processes in both performances, “‘Tales of Terror’ went through a normal rehearsal process, despite being four different short stories strung together by little segments featuring me as the Vincent Price-type horror host character. We all learned our lines, did our character work, and treated it as if it was a normal Mesa College Theatre Company show. The most glaring difference was that it was produced through open broadcaster software which gave it a more cinematic radio broadcast vibe. With ‘Romeo and Juliet,’ we tried to capture a similar cinematic feel, but took a completely different approach. We all rehearsed and recorded the footage on Zoom, filming each scene out of order each day for two weeks.”

Juliet, played by KaileyKielle Hoga, added on to the explanation. “‘Tales of Terror’ was a live radio theatre performance. The emphasis was mainly on our voices and less on effects. I think that was executed really well and was a great way to take on this different performance space. ‘Romeo and Juliet’ was recorded, and we still tried to keep it simple, focusing on the language, but there was definitely a bit more flair.”

With film acting in “Romeo and Juliet,” Hoga noted that “a pro would be that memorization was a lot more flexible. After we filmed a scene, those lines were able to go out the window. I think the biggest con, though, is the lack of connection with the audience during the performance. The cool thing about theatre is we perform in front of people; we can see them, and we are able to develop a connection with them throughout the performance. I’ve really missed that over the past couple months.”

Penrod also wanted to mention, “Despite the odds against us due to the pandemic, it’s totally worthwhile when you realize that the opportunities for creating theatre online are pretty much endless, and technology can allow for that creativity to be expressed in ways that simply can’t be replicated by anyone or anything else. So while it may have been new and initially uncomfortable to an extent, working on Zoom as an actor is still incredibly fulfilling.”