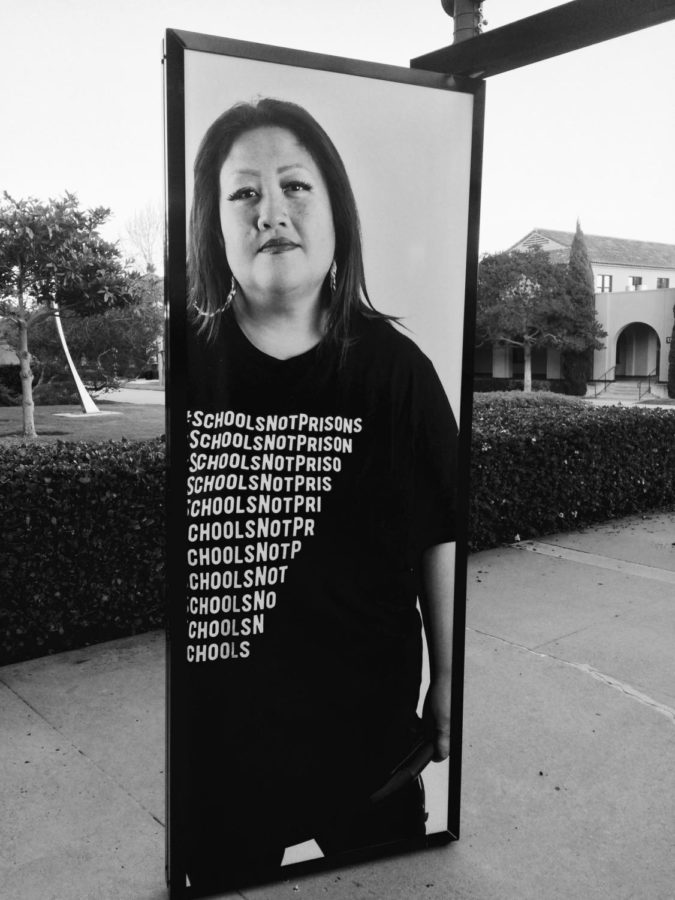 DJ Kuttin Kandi in collaboration with "Transcending Perception," an art installation by photographer Josemar Gonzalez and the AjA Project. Hosted in the Arts District at Liberty Station (NTC Foundation).

“I rock gold earrings cause I be girl, be | and I do it for the art, I be what I was born to do | because I am a descendant of storytellers | and I write stories for people in the dark | I spark because writing is a struggle against silence | I be making small movements but I scream like a giant.” — DJ Kuttin Kandi

A self-labeled “People’s Hip Hop DJ Scholar,” DJ Kuttin Kandi has been on the scene since the ‘90s, scratching out beats on the turntables, spittin’ fire in her spoken word poetry and giving voice to marginalized communities through her work as an organizer. She self-identifies as a queer, disabled Filipinx[a/x]y-American whose broad and impressive resume includes over 30 DJ competitions, co-founding various community organizations, and working with hip-hop industry heavyweights such as Jay-Z, MC Lyte and the Roots. On March 1, Kandi spoke as a guest in Mesa’s “Left meets Right: The Arts and Community” series, which showcases artists using their creative passions to engender change in their communities.

Kandi’s central message was the importance of knowing your origins and what triggers you to stand up, speak out, create art and join in solidarity with others for justice. Kandi spoke of her origins, being raised as a teen in Queens, New York, and attending high school in a predominantly Black and Brown community. She said that she “understood early on the experience of policing and police culture.” She recalled a student walkout that happened in reaction to the death of a Black student shot by a police officer. She described the metal detectors and long waits, the ever-present racial profiling, the random searches, the system that left female students open to potential sexual assault and the authorities who used victim-blaming language.

According to Kandi, at that age, she didn’t know how to articulate the realities of the system she was in. She said, however, that she knew “that as a Filipinx, as an Asian American, that the way I was treated was always still different with the way my Black friends were treated. Growing up in my community, it taught me early on what solidarity looked like.” Home was not a haven and she said that she dealt with violence, depression and anxiety, as well as trying to “numb the pain” with alcohol, drugs, cutting and attempted suicide. Her friends, her people, she said, were her community. “We understood that we were all we had,” added Kandi, “because the world often already other’d us.”

Kandi spoke of how the inability to articulate the things going on inside of and around someone can stem from an unexamined life. According to Kandi, she was deeply inspired by others within the hip-hop culture who were speaking their truth through their art.

“I get out, I’ll get out of all your boxes | I get out, you can’t hold me in these chains | I’ll get out |  Father free me from this bondage | Knowin’ my condition is the reason I must change.” — Lauryn Hill

“That line changed my life,” said Kandi as the music faded out.

It awakened Kandi, she said, to the roots of her pain and “the things I wanted to be conscious about.” When she was able to evaluate the “conditions of the world around me,” she said, “those institutional conditions,” it created the opportunity to reframe and re-empower her own life.

This was a critical step in Kandi’s transformation from self-actualization to collective-actualization, leading her into her art justice work as a poet, a performer, an educator and a powerful voice for marginalized communities. “I knew I was thirsty for more,” she added.

Art justice work, organizing work, is not easy, Kandi said, and there will be moments of tension and conflict and losses. And yet, it is clear from her passionate presentation that it is work worth doing. It is worth standing up for, worth speaking for and worth sharing. Her deep and abiding love for hip-hop goes beyond the competitions and the beats, it goes to the foundations of a community built on creativity, respect and solidarity. What fuels Kandi’s art activism is revisiting the experiences of her past and acknowledging the power she has to use those experiences for transformational change, in herself and in the world.

As Kandi asked throughout her presentation, “What is the unexamined life for you?”