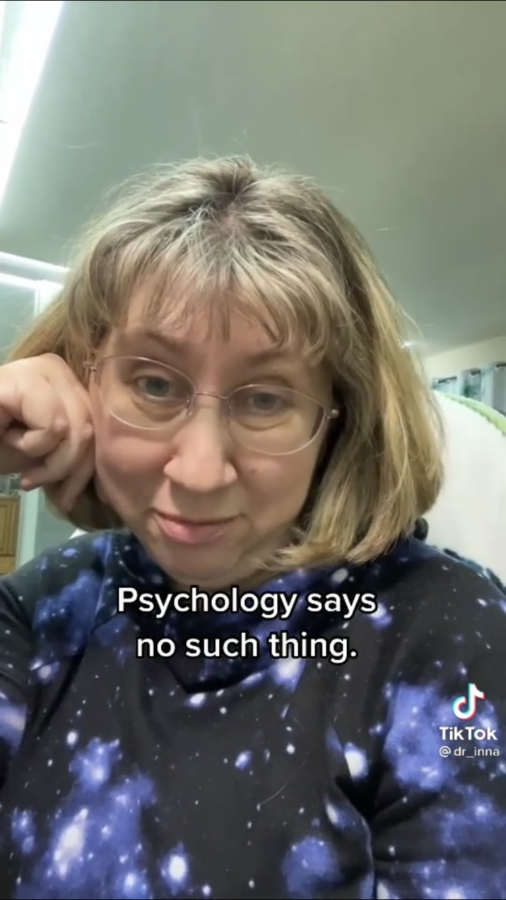 One of Kanevsky's TikToks debunking a false claim from another creator.

Inna Kanevsky, a psychology professor at San Diego Mesa College, has grown into fame by utilizing the trend of TikTok videos.

Since joining TikTok last year, Kanevsky has posted numerous videos debunking psychology myths, with the videos aimed at educating and engaging her students while addressing relevant topics. She has hit over 800 thousand followers on her account @dr_inna, in a process she describes as “just sort of happening.”

Initially, Kanevsky said she joined TikTok to help out her daughter with her videos. Kanevsky then realized the convenience of short videos and utilized the platform to produce videos of class material for her students.

“I thought if I do like one minute videos just to show a concept or illustrate something, and then use music,” said Kanevsky, “students may be actually willing to watch that.”

For example, Kanevsky did a video series that ran along for three days on the topic of the Stanford Prison Experiment. It was a social psychology experiment that attempted to investigate the psychological effects of perceived power, focusing on the struggle between prisoners and prison officers.

In another one of her videos, she did a behind-the-scenes take on what it feels like to do prep work for creating these series. It showed Kanevsky working and once she took a break, she shakingly took a sip from her mug; it provided a comedic tone and illustrated the idea of how much work she puts into the series.

One of Kanevsky’s students, Krys Schempp, said that in this “ever-evolving tech-filled world, it feels like teaching will have to adapt to be of any use.” In regards to Kanevsky’s unique approach, Schempp also added, “I am confident that her TikToks will encourage more people to study psychology, but it might also inspire more teachers to come out of the libraries, into the future, and reach a whole new level of teaching.”

After a while of making videos, Kanevsky said she got into it. She kept creating content and interacting with other creators. One of them came into contact with Kanevsky about a creator who was spreading fake information on mental health. The creator started getting questioned about the credibility of their posts and received negative responses. The problem was that the creator was unqualified to give mental health advice.

Kanevsky decided to help out with the situation. “So I made a video,” she said, thinking that as a professor, “maybe I can get through a little better,” and as someone without the credentials, maybe “you shouldn’t talk about mental health.”

That video went viral and a plethora of people asked for more from Kanevsky. Other creators kept tagging her in psychology facts and mental health videos. “That’s how I found out, I wasn’t even aware until January that there is so much misinformation about psychology on TikTok,” added Kanevsky.

For the debunking videos, there was a video that reached over 14 million views. A TikToker claimed that “Psychology says that when someone is laughing and they look at you, they’re attracted to you.” In response, Kanevsky had a simple explanation. “Psychology says no such thing. And don’t even get me started on the ‘if you dream about someone, that means they are in love with you.’ How is that supposed to work?”

Schempp said she wanted to include that “Dr. Kanevsky feels like a TikTok autocorrect feature that politely comes in to correct these misconceptions, specifically when they are applied to viral accounts. In this way, she is a cure for viral disinformation.”

Following the trend of TikTok videos, whether it’s for educational or entertainment purposes, Kanevsky took the opportunity to engage with her students by debunking false information in a way that made her virally famous and eventually, Kanevsky laughingly confirmed, became her hobby.