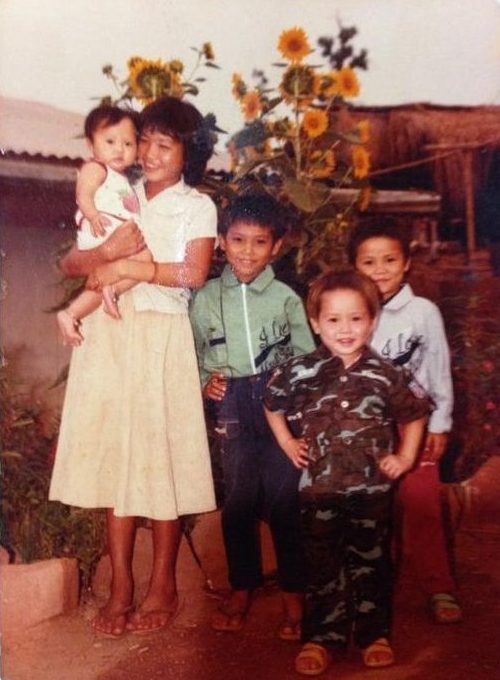 It is difficult to imagine what the parents of first-generation Americans experienced at a young age. Image of Alani Huynh's aunts and uncles at a Lao refugee camp.

This new movie takes place in Toronto, Canada and follows the story of 13-year old Meilin Lee during the year 2002.

The film’s premise introduces a topic rarely discussed in modern media, and surprisingly works as a great ice breaker for discussions regarding subtle pressures found in Asian American immigrant households. Some of the key topics mentioned in the movie include pressures to regulate one’s emotions, seeking parental approval, and the irrational fears that come with transitioning into a tween. Putting these themes in a first or second generation Asian American perspective provides for much discussion within this specific community.

In the movie, the main character Meilin turns into an oversized red panda whenever she feels strong anger or frustration. This occurrence is due to her ancestor’s prayer of protecting her family in times of dire need, giving the women in her lineage the power to hone in this particular set of emotions. The choice of anger as fuel for these magical powers is an interesting choice on the director’s behalf, as Asian women are often scolded for displaying feelings of anger or abrasiveness. This disapproval commonly comes from fellow women relatives, such as mothers and aunts. Throughout the movie Meilin struggles with learning to accept and control her emotions, while her family insists that she do the specific ritual to vanish the panda. One of the notable details throughout this sequence involves the fact that her peers are generally accepting and adoring of her power, while her family is obviously ashamed of it. This detail alludes to the deep disconnect between American and Asian immigrant views. The pressure for Asian daughters to be seen as poise and docile is one that many deal with silently, particularly due to a fear of disappointing one’s parents – a theme also mentioned through Meilin’s character.

Many children of immigrant parents or grandparents know the guilt of not feeling good enough. Briefly mentioned in the film, Meilin mentions how grateful she is that her ancestors were able to reach America. Most immigrant families have a story, and the children of these immigrants are regularly told such stories throughout their childhood. Hearing that one’s parent vividly remembers the nights sneaking among rainforest foliage to avoid communist soldiers, became stranded on a deserted island for months, or were attacked and had family members killed and raped by pirates, can be a lot for a child. And after hearing how much they sacrificed to get here, the least their child can do is be everything their parents hope and dream them to be, right? This is a very common mentality among first and second generation Asian Americans that often begin to develop during elementary age. This deeply rooted guilt can lead to an irrational fear of disappointing one’s parents, so much so that the child may begin to develop bad habits out of their fear.

One of the greatest criticisms the film has received so far is Meilin’s change in character, becoming more “rebellious” as the movie continues. Parent viewers are astounded by the dishonesty Meilin has when speaking to her parents, constantly lying to save face or failing to step up when at fault, leading peers to be accused rather than herself. What these critics fail to realize is how common this specific trait is. Children who obsess over acceptance from their parents, through either their own mental anxieties or verbal pressures from parents, have an amplified fear of disappointment and will coincidentally do anything to protect themself from imperfection.

These factors in correspondence with the particular age Meilin is, acts as a great introduction to the unhealthy patterns seen in Asian American mother-daughter relationships. Being thirteen, Meilin displays this awkward tween stage as one of importance. This is a time of discovering oneself, and usually a time where a child begins to branch out from their parents’ character. This film acts as an enjoyable movie about tweenhood, but underneath the surface tells a story relatable to a very particular audience. It is disappointing to know many watched the film not truly understanding the elements that underlie the obvious, but if this movie speaks to anyone in an impactful way, a great next-step recommendation would be Amy Tan’s novel, “The Joy Luck Club.”  Turning Red truly only scratches the surface of the Asian American daughter experience, but it works well for what it is. It is great to see more representation of people of color in modern media. Although the film may not be entirely relatable to the general public, for those that can relate this movie is greatly appreciated.