Hulu’s “Only Murders in the Building” offers intrigue and wit 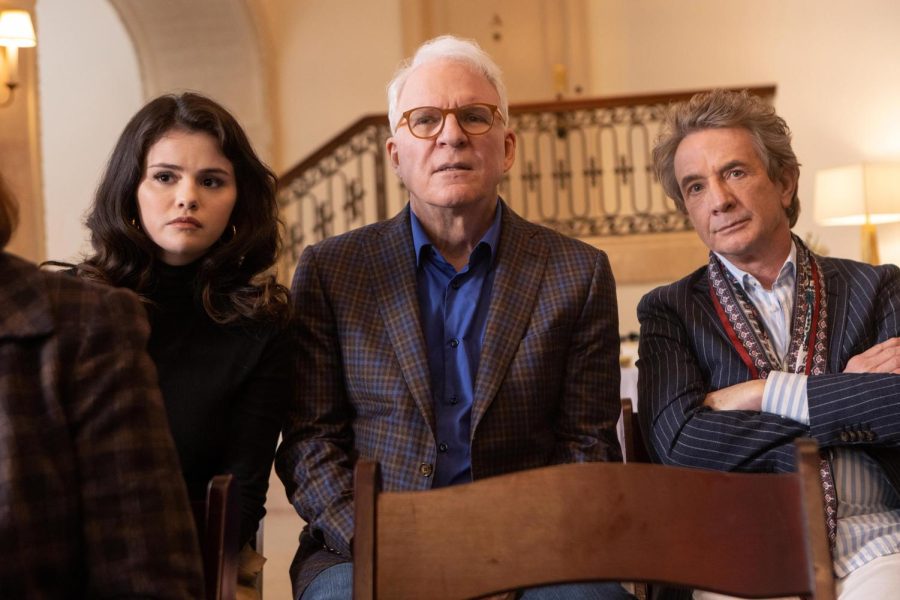 Steve Martin, Martin Short, and Selena Gomez star in Hulu's "Only Murders in the Building".

Hulu’s “The Only Murders in the Building” skillfully presents mystery and wit through a dynamic plot while tackling deception, vulnerability, and trust.

The series, which stars Steve Martin, Martin Short, and Selena Gomez, follows Charles, Oliver, and Mabel as the unlikely trio work through the bizzare death-ruled-suicide, of their neighbor Tim Kono. The perforformative group, who originally bond over their love for a popular murder mystery podcast, decide to produce their own podcast as they conduct their makeshift investigation. The reserved group ultimately must work through their own hesitations and difficulties, learning to trust their new friends and piece together the bizarre relationships and final moments of Tim Kono’s life.

Charles, played by Steve Martin, is an old television actor who remains stuck in his glory days who slowly learns to open up to Oliver and Mabel, even beginning a relationship with a friendly bassoonist who also lives in the building. He struggles to find interesting acting opportunities and tries his hand at voice acting as the host of their podcast. Oliver is an eccentric theater director who has financial difficulty and is hopeful that their new podcast may be the answer to his overdue building payments. After consistently seeking financial help from his son, Oliver must learn to repair his relationship with his son. He applies his eccentric casting methods to deduce who killed Tim Kono and direct their investigation. Mabel is a bold yet reserved artist who moved into her aunt’s apartment to help renovate the space, however her mysterious past comes back to play an influential role in the groups’ investigation and she must face old friends and work through her own difficult decisions to find the truth.

The characters are all incredibly well developed and even the side characters which they encounter along the way have depth and are dynamic in their own ways. From suspects to characters which help them along the way, including a cat-obsessed neighbor with a potential future in theater to a skeptical detective who must learn to utilize the podcast to further the muddled investigation, each character has the possibility to stand alone, despite screen time.

Each episode skillfully balances building intrigue and mystery with forward plot progression and relevant obstacles which the characters must overcome. They must deal with negative backlash from their neighbors as well as committed fans who begin to camp outside their apartment after a popular talk show pushes them into the limelight. They encounter a possible illegal jewelry business, shady behavior from English singer and songwriter Sting, and even a sponsor for their podcast in the form of an exuberant deli owner.

The show as a whole skillfully follows the characters as they grapple with how to pursue the truth as they themselves must present themselves truthfully. Characters often lie to one another and must learn to be honest with themselves and others in order to genuinely trust each other. Each episode is narrated by a different character and, as their secrets are slowly revealed, viewers must determine whether they believe each narrator in their presentation of the facts. The show also offers an interesting perspective into the performative nature of a society that often views violent topics such as murder as entertainment. They highlight the lengths that certain creators must go to in order to produce dynamic storytelling, as Oliver consistently asks the other members to repeat themselves in a more engaging way or recite sentences like lines. The show also criticizes the fan culture surrounding issues like these through the characters who begin to practically live on the street outside the apartment.

Ultimately the show is incredibly well executed, from dynamic shots and well-done breaking of the fourth wall, to the likable but flawed characters. “Only Murders in the building” offers viewers with an Agatha Christy-type mystery mixed with the wit and shenanigans of Tim Martin and Martin Short.