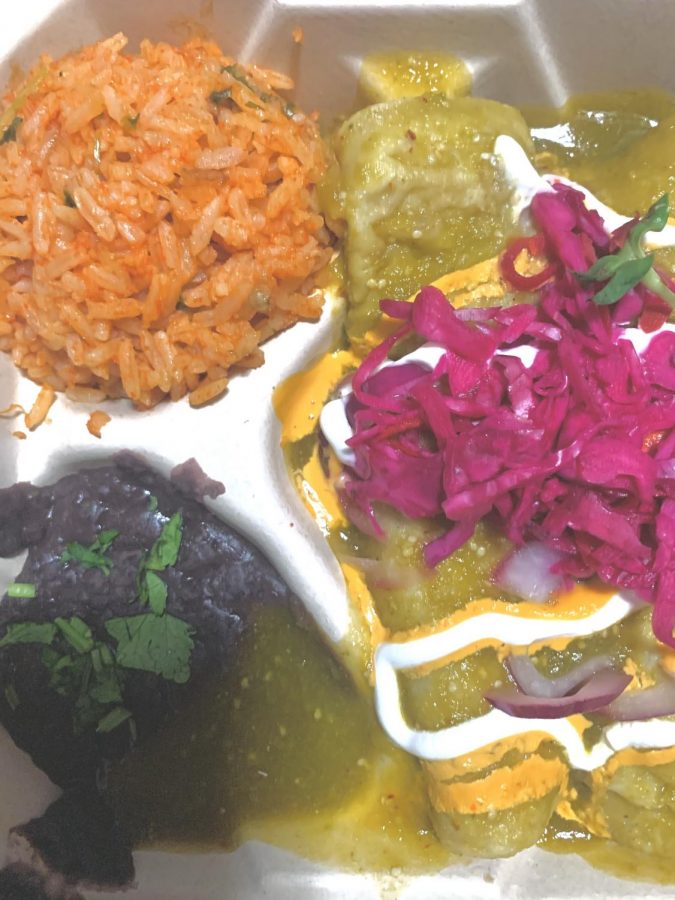 Finding authentic mexican food that promotes a vegan diet may sound like a challenge but you can find it at The Village. Located on the corner of Hamilton St and off El Cajon Blvd, patrons who come to The Village can expect genuine customer service and a carefully-thought out menu to make their first experience a swift one.
Focusing on two different cuisines, one Japanese and one Mexican, The Village has plentiful plant-based options to offer. I was personally fascinated by the idea of substituting meat with cauliflower in the ramen dishes: how it would be presented and what flavor it would give the broth. Although it would have been a good dish to try as one of my first vegan meals, I ended up choosing something familiar to me. I ordered instead their “Enchiladas Verdes” because I’ve had chicken enchiladas and had a known flavor to compare the vegan alternative with. I really enjoyed the meal, the salsa verde was sweet as opposed to the traditional sauce with its tangy flavor. The tortillas were cooked as the original dish, but substituted with a stuffing of sweet potatoes, coated in the sweet salsa verde, and topped with shredded beets, each bite of the dish was surreal. I would have never guessed that the combination of the three, would create a pleasing experience for my taste palate. The enchiladas were paired with a side of black beans and traditional red rice. They also offered an Arroz con Mole Bowl that featured a scoop of rice drenched in Mole sauce, and paired with a side of black beans, pico de gallo, and shredded cabbage. This dish was comparable to an everyday meal you might have in a Mexican household. Red rice and beans serve as a staple in any dish and this bowl was not an exception. The mole sauce was thick and savory and had that spicy aftertaste that makes it so extraordinary. The pico de gallo and cabbage were smartly placed and acted as a palate cleanser for when the mole spice began to kick in.
For not following a daily vegan lifestyle, eating at The Village was a breath of fresh air. This experience has helped me realize that eating plant-based can be equally as satisfying and filling. Perhaps with a few more frequent visits to this establishment, I will be making the switch to a vegan diet.