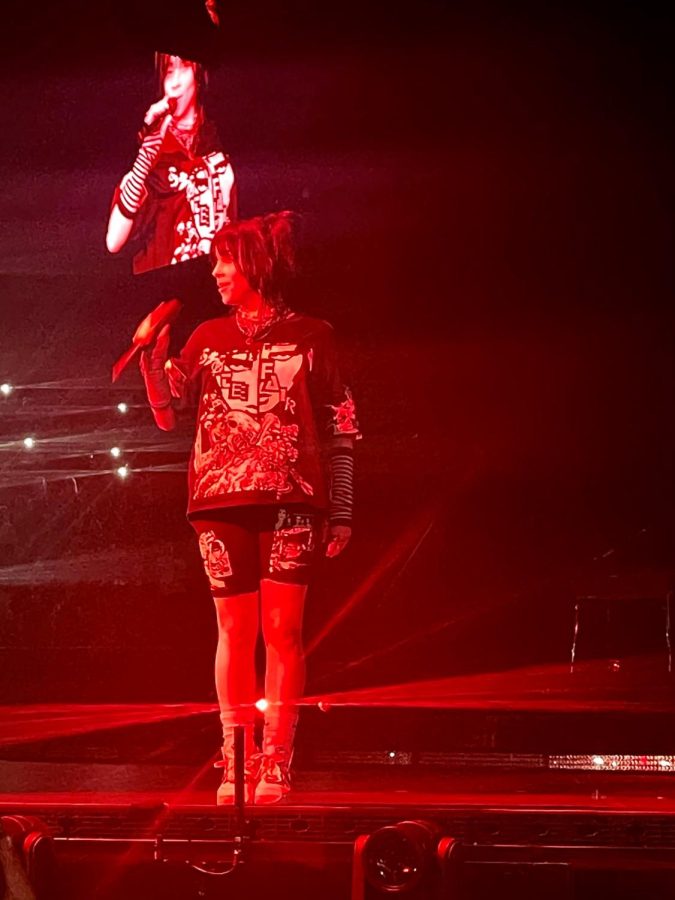 Amazing would be an understatement when it comes to Billie Eilish. Her 102 million followers on instagram would also agree she is beyond amazing. She recently won an Oscar for best song ever at the 2022 Oscar’s award ceremony for her song “No time to die”. Which I’m sure will be sitting next to her ridiculous collection of awards recognizing her dedication and love for the craft of songwriting and singing. Billie Eilish has won 5 grammy awards, 5 MTV awards, 2 billboard awards, 2 american music awards, and 1 international award in britain. She is one to be reckoned with in this era as one of the youngest, most accomplished, dedicated, ambitious, gorgeous and just absolutely stunning  young women  to become an inspirational singer and songwriter.

You will definitely feel and see why the show was sold out, it was absolutely spectacular. The cinematography completely captured her aura as she vogued through the lights singing and dancing the night away. All together her music really came to life with emotion and touched many of us in our vulnerable wounds in our souls . She came out looking adorably cute and powerful in her custom made t-shirt and shorts with her hair in Pigtails all iced out dripping in her jewelry rocking the show. A definitely must see performance.

Billie Eilish recently stopped by on her long 6 month tour in Inglewood, Los Angeles. The amazing opportunity presented itself, to drive out to the Forum in inglewood to watch her perform in front of her hometown city. Many of her shows were already sold out by October in other cities at the beginning of her tour so without  hesitation, I instantly bought a ticket as close to the stage as I possibly could before they sold out. By the look of available seats there weren’t many tickets left. Upon entering the indoor arena I realized I should have most definitely gone with the cheapest one I could get because there was absolutely no seating chart near the stage.

She caught the attention of a lot of other local actors, musicians, and influencers that lived in the Los Angeles area. Little did I know I was dancing around in the same building with marvel and DC super heros Tobey Maguire and Jason Momoa best known on the big screen for their performances playing Spiderman and Aquaman. Someone even pointed out that Billie’s Family was sitting right under tobey maguire’s row. Then someone mentioned to me that my seat might have been somewhere behind where we were standing. Which was also the same section everyone on the ground near the stage was yelling at youtube stars, and other actors and actresses whose names I couldn’t seem to put a face to.

Overall it seemed like all of Los Angeles and others in nearby cities like myself came out to her show in the three days that she performed at the forum before taking a month break then heading off to Europe to finish spreading her beautiful music around the world.