A talk by Dwain Deets of San Diego 350.org 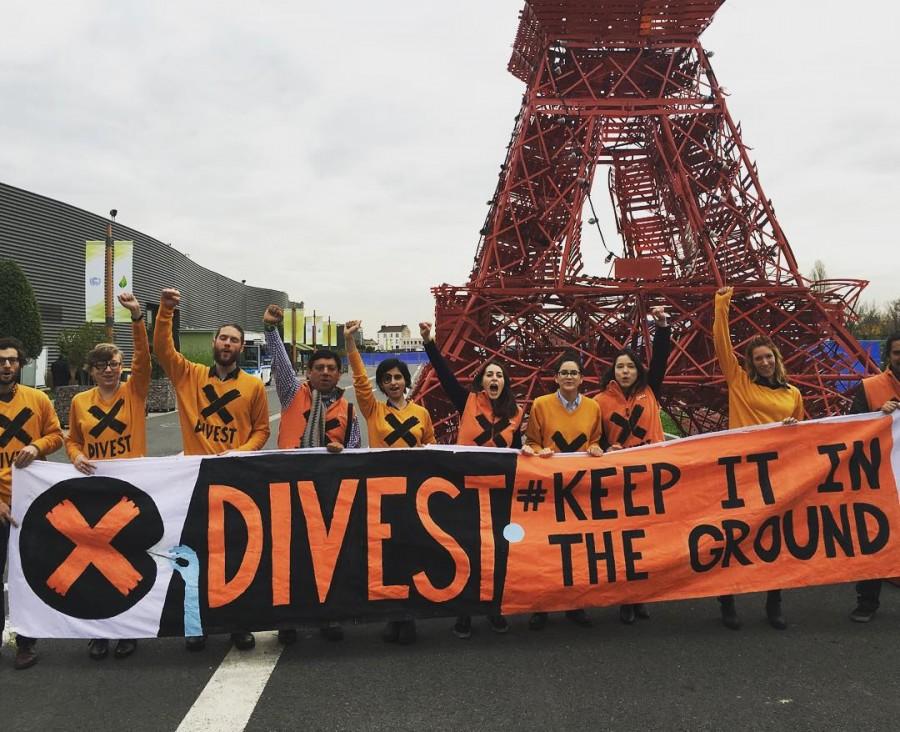 Youth calling for divestment at COP21 Image from instagram.com/350org

San Diego 350’s Dwain Deets gave a presentation on fossil fuel divestment. The name 350.org refers to the amount of carbon in the atmosphere in ppm, in all of time before the industrial era the amount of carbon has been around 250 ppm to 300. That number is now around 400 and rising. There are two types of risk that occur when dealing with fossil fuel divestment. The first risk is of not realizing the social cost of continuing to invest in a thing, as in divestment from South Africa during apartheid. In this case continuing the use of endowments from South Africa would be showing support for apartheid.
Today the focus of divestment is in fossil fuels. The social risk in not divesting from fossil fuels would be damage to the planet, and this happens in many ways. The social effects are in people and the inability to live life, caused by climate change when resources like land, food, and water are limited, inaccessible, or eliminated, causing suffering and mass movements of people away from where they can no longer survive. And when climate change causes a mass migration, if no preparations have been made to account for this there will be a more problems.
To change directions, one major step is to stop relying on fossil fuels, and by doing so supporting their exploitation and burning, and to start relying on clean and renewable energy. By discontinuing support for fossil fuels through divestment, they will stop being effective. Currently a company with knowledge of a fossil fuel reserve will list that as an asset in their books, and their stock price will go up. With widespread divestment, however, this will cause the untapped reserve to be listed as risk, and will not positively effect the company.
There are two big pension funds in California, California Public Employees’ Retirement System (CalPERS) and the California State Teachers’ Retirement System (CalSTRS). In 2014 pressure was put on them by investors to divest these pension funds from fossil fuels, but they did not divest. In 2015 Governor of California Jerry Brown (Democrat), signed SB 185, requiring to divest from companies that receive at least half their revenues from coal mining (http://www.fossilfreeca.org/campaigns/sb-185/).
The global CO2e budget, CO2e means the total of all the emissions and expressed as the carbon equivalent (including carbon) from a source. In the case of the globe, that source would be all emissions into the atmosphere. There is no global agreement on a number which can be called the limit of all CO2e at this time. Some numbers that are out there include 565 gigatonnes emitted by 2050 proposed by Bill Mckibben of 350.org and 987 gigatonnes by 2100 by Carbon Asset Risk.
Changing focus from investments in fossil fuels and only focusing on energy sources that are clean is extremely necessary. On a local level, divestment in the Mesa Foundation endowments, about $1 mil that include fossil fuels would limit monetary resources given to students. But the benefits of having clean energy investments in an environment where it makes sense, and in a future where clean energy may overtake fossil fuels as the lucrative source of money in investment funds it greatly outweigh the risks of continued investment in harmful sources of money and energy.