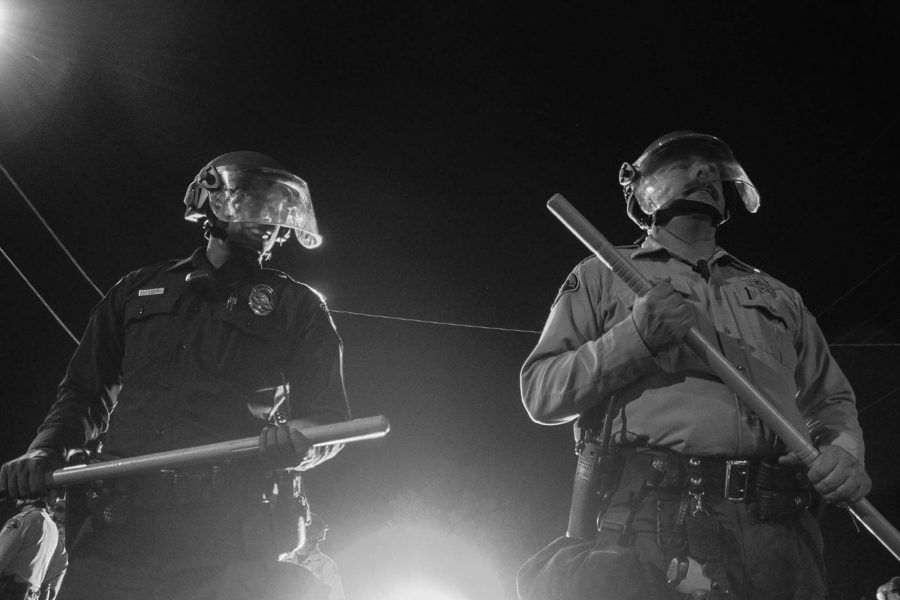 An unarmed black man was fatally shot on Sept. 27 on the 800 block of Broadway in El Cajon. The El Cajon Police Department was responding to a 911 call from the man’s sister who told responders her brother was “not acting like himself” and acting erratically.

Alfred Olango, 38, was shot dead after ECPD officer Richard Gonsalves fired his lethal weapon. Prior to the release of surveillance footage, the ECPD released a still-shot which showcased Olango in a shooting stance. After a press conference, District Attorney Bonnie Dumanis was able to confirm that Olango had pulled out a e-cigarette from his pocket, pointing it at the responding officers.

Soon after the shooting, hundreds fled to the scene of the crime, many of them Black Lives Matter activists. Eboney Stuart, 23, from Philadelphia was among one of the protesters. “I am tired and I am scared. Every single day it’s another one of us.” Activist and revolutionary groups traveled from as far as Los Angeles County to show their support.

People of all ages and races showed their support for Olango and his family, leaving candles, letters, and signs at the shopping plaza where he was fatally shot. Aside from signs for Olango, tables and a tent were set up where people could grab water and food.

Flooding the streets of El Cajon, protesters marched down Broadway blocking traffic and intersections. Chanting “Black Lives Matter” and “No justice, no peace” they made their way down various streets. El Cajon Police Department were forced to shut down highway ramps as a precaution for the ongoing protests.

Businesses in the area were forced to shut down following the shooting as a precaution. Though marches and protests remained free of damage to property, arrests were made Sept. 29, after a group of 50 protesters began throwing bottles at ECPD, as well as banging on bypassers’ cars. Police were forced to use non-lethal weapons, releasing tear gas and using BB guns to shoot at the crowd.

Linda Thompson, an El Cajon native, was among many of the marchers. “I have lived here all my life and I don’t believe what the officers did was correct.” Thompson had been at the plaza where Olango was shot just minutes before the incident. “He was having some sort of emotional breakdown. There was no need to shoot him.”

While it was first reported that Olango suffered from a mental illness, his mother later confirmed that he was not mentally ill but rather in a mourning state after the death of his best friend. Olango was a refugee from Uganda, who entered the United States when he was 12 years old. Olango’s Facebook page had indicated that he was a student at Mesa College. However, according to Ashanti Hands, Vice President of Student Affairs, while in the United States, Olango attended San Diego Community College District’s Continuing Education program from 1997 to 1998 and again in 2000.

After the release of the surveillance footage, protests continued. According to Olango’s sister, officers knew they were responding to a 5150 call, with possible psychiatric backup needed. Three calls were made before police arrived at the scene.

“You don’t shoot someone who is having a mental breakdown,” said one protester who did not want to release their name. “Dylan Roof was given a bullet-proof vest after he shot nine black people in a church,  but this man gets shot for what? For being having a mental crisis?”

A Facebook user posted footage of Olango’s sister after the incident where the woman could be heard asking police, “why did you shoot him? I call you to help him and you kill my brother.”

“She called the police to help her and they did everything but that. They didn’t even comfort her after,” V. Carter, one of the protesters, told The Mesa Press.

While many gathered in solidarity, one woman who lives in the condo across the street from the scene of the shooting admitted that she was scared. “For the past three nights, I just hear the helicopter above my house and see the police lights. We have kids. We have jobs. These people need to go home and mourn there. It’s scaring the neighborhood.”

The majority of protests took place in El Cajon, but on Oct. 1, a hundred or so people gathered at the WorldBeat Center in Balboa Park. With security provided by the Nation of Islam, the group marched down Park Boulevard to the Hall of Justice in Downtown San Diego.

Following traffic, marchers chanted Olango’s name and encouraged others to join them in their march. While the crowd was smaller than it had been in days, San Diego Police Department shut down a handful of streets as well as halted traffic at the off ramp of Park Boulevard off the 5 South.

Crowds have dwindled down in El Cajon, but the few that remain said they’ll continue to fight for the justice that Olango and the many other members of the black community who have lost their lives to police-involved shootings deserve.