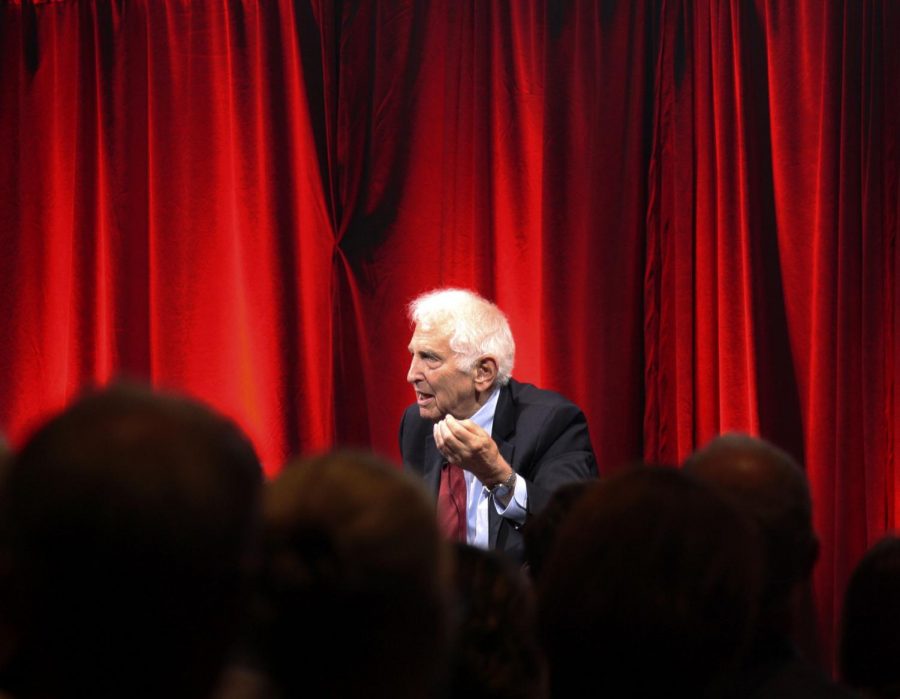 Daniel Ellsberg, a former government official, economic scholar, journalist and anti-war activist came to San Diego State University to discuss his leaking of the Pentagon Papers, his latest book, and American foreign policy, among other things. According to biography.com, “The documents contained evidence that the U.S. government had misled the public regarding U.S. involvement in the [Vietnam] war.”

Ellsberg opened up his talk by examining American sentiment surrounding the involvement in the Vietnam War in the 60s, which he labeled a “myth.” It was not until he himself was on the front lines as a Marine that his eyes were opened to what things were really like. While in the Marine Corps, he was given the opportunity to see Vietnam’s various provinces, and witnessed some residual scars of war leftover from Japanese, Chinese and French colonization of the Vietnamese people. “The Vietnamese on our side who were fighting the Vietcong still referred to them as ‘our brothers’” he recalled. Eventually, Ellsberg reached the conclusion that “we were the invaders, much like the Chinese and French and Japanese were…We had no more right to be killing anyone in that country than the Japanese, or the French had. They [the Vietnamese] were seeing us in the same shoes as their previous invaders, and rightly so.”

When he revealed the Pentagon Papers in 1971, Ellsberg was under the impression that he knew everything that there was to know about the war, given that he worked for the RAND corporation, “a highly influential nonprofit that closely advised the U.S. government on military strategy” (biography.com), a position which eventually led him to being assigned to work for “Assistant Secretary of Defense for International Security Affairs John T. McNaughton” (biography.com.) Ellsberg’s tenure in working under the Defense Department extended into two presidential administrations, under both Lyndon B. Johnson (LBJ) and Richard Nixon. However, he was told by his friend Larry Berman, author of “Planning a Tragedy” and fellow Vietnam War scholar, that information had actually been withheld from him. Apparently, LBJ’s V.P. Hubert Humphrey had given LBJ advice that paralleled what JFK, LBJ’s predecessor, had foreshadowed-according to Bobby Kennedy, “My brother was convinced we would go the way of the French.” What Humphrey predicted was that LBJ would be denied nomination in four years, that Vietnam would be a loss (like it was to the French), and that there would be a split in the Democratic Party if LBJ were to send troops to Vietnam. All three predictions ended up being fulfilled. Unfortunately for Johnson, his priorities were misplaced. “I think he was more prepared to risk his election, as a winner, as someone who’s tried to win unsuccessfully, than to win the election, and be called a loser in Vietnam by Nixon, or Ford, or his other Texan friends. One of his Texan friends told him, ‘Johnson, Texans will forgive a lot of things. But they will not forgive losing a war.’ That [mindset] kept 5 presidents in a row in Vietnam, at the cost of any number of Vietnamese lives.” According to “Planning A Tragedy”, Humphrey was not the only government official that warned Johnson of the consequences of escalating the Vietnam conflict; he also mentioned siblings McGeorge and Bill Bundy, experts in defense policy who advised JFK and LBJ on foreign affairs. Ellsberg saw firsthand how “Johnson, against his own bitter judgement, went ahead and sent troops into Vietnam, under pressure from Robert McNamara to do so.”

Ellsberg also addressed his most recent book “Doomsday Machine”, in which he argued that longstanding U.S. policy concerning nuclear weapons is “profoundly immoral and horrendously evil”, something that continues to this day. Much of U.S. military policy involves connections the government has with defense contractors, like how Secretary of State Mike Pompeo recently certified a deal with the Saudis with support from the legislative affairs committee. ”It so happens that the head of the legislative committee was, as of recently, a lobbyist for Raytheon”, Ellsberg disclosed, explaining that Raytheon is a major defense contractor for the U.S. military. During his time as a government official, “Ellsberg’s primary responsibility for the Defense Department was to craft secret plans to escalate the war in Vietnam” (biography.com), and it was the information he was given that served as an impetus to leak the Pentagon Papers. “600 million people would die if our nuclear war plans [were carried out and] didn’t go awry” Ellsberg affirmed with a solemn look on his face. “I thought of that as the most evil plan that was ever existed. And it was done by people I was in daily contact with…family guys, ordinary Americans. And yet they were somehow capable of obediently carrying out these plans.”

Ellsberg moved onto discussing other whistleblowers like himself-notably, Edward Snowden and Chelsea Manning-as historical context has prompted people to draw comparisons between them and him. Ellsberg believes that there are “misconceptions” about what the’ve done, and their actions are really not much different than what he did. In fact, he believes that Snowden and Manning “represent to me my best self…They acted the way I wish I acted when I was their age.”

In regards to his moral courage, Ellsberg approached the topic by clarifying what moral courage means to him: “Risking ostracism, risking losing your immediate associates, threatening your career, your income, your ability to send your children to college…by doing something that will isolate you in order to save ‘others’-people outside your immediate wee group.” When asked what he thinks could be done to incentivize people to act with moral courage as he did, Ellsberg said, “I think we have to change a political culture that puts the very highest value on obedience to the boss, on keeping secrets of the team, keeping the promise to keep secrets for their team.” Although Ellsberg stated that he can imagine others taking initiative as he did, he is not sure people will. “Unless there a lot of lives at stake, or the Constitution at stake…unless there are very large stakes, the cost will rarely be worth it…But there are times, when there a lot of lives at stake, and yet people don’t do it…You have to be willing to take risk, without any real assurance that there will be an impact.” This happened with the Pentagon Papers; there was no immediate impact on war morale, because Ellsberg couldn’t find anyone willing to release the Pentagon papers, and because the U.S. government tried him on charges of espionage, theft and conspiracy (biography.com.) It was a while before people started seeing him in the positive light history views him through today-as a war hero.

The night closed with Ellsberg relaying how successful we have been at revealing and exposing truths hidden by governments and corporations. On a rather somber note, Ellsberg’s closing remarks were: “I do not think we as a species are truly capable of change.”