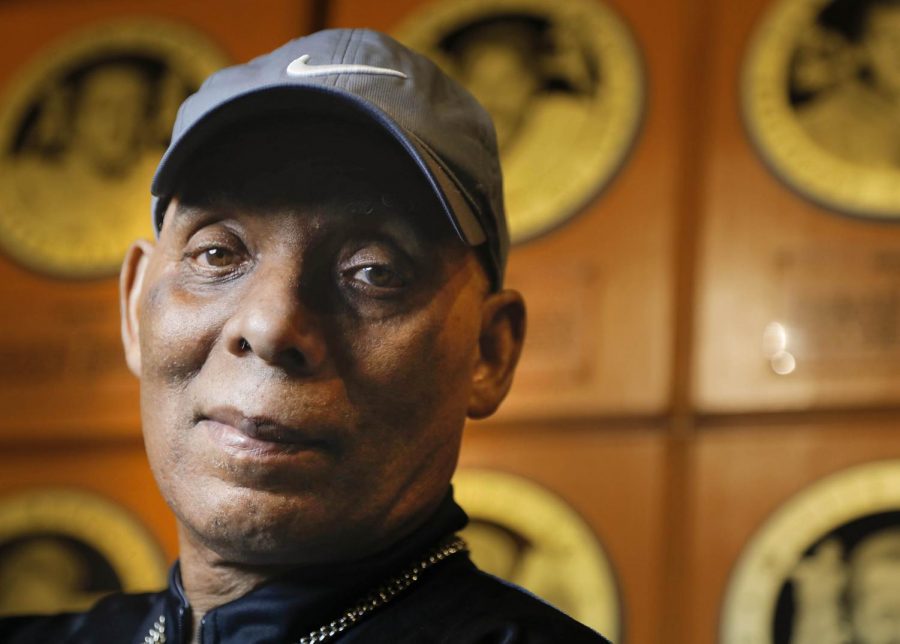 Arnie Robinson, Olympic gold medalist, and former Mesa College coach and alumni, in front of the Breitbard Hall of Fame at Petco Park, which includes his plaque, in San Diego, CA.

Arnie Paul Robinson Jr., the Olympic gold medalist and Mesa College alumni, died on the morning of Dec. 1 at the age of 72 due to COVID-related complications with cancer, according to sources close to the family.

Robinson had been fighting a long, arduous battle with Glioblastoma — an aggressive, cancerous brian tumor — since a 2005 diagnosis, according to The San Diego Union-Tribune. However, sources say, that is not what ultimately led to his death.

According to Wes Williams, an assistant Track and Field coach at Mesa College and one of Robinson’s life-long friends, Robinson contracted COVID-19 from one of his caregivers in mid-November, exacerbating pre-existing health complications and leading to his death.

“When I received the news that my friend had passed it was heartbreaking because of the fight he put against the medical issues in his life over the past 20 years,” Williams said. “The sad part for me is he, in essence, beat his cancer, but it was COVID-19 that actually took his life.”

Robinson began his road to a long and decorated career as a track and field athlete in 1967 when he enrolled at Mesa College, according to The Mesa Office of Communications.

“He came to Mesa from Morse High School,” Williams said.

Here, he went on to set track and field records in the high jump, the triple jump, and, of course, the long jump, a discipline which Robinson would carry on to the professional level. At the 1972 Olympic Games in Munich, Robinson took home the bronze medal in the long jump, only to return in 1976 to take gold in Montreal, soaring a record-breaking 27 feet, 4 ¾ inches, as previously reported by the Mesa Press.

Though typically a distinctively humble and reserved man by all accounts, when Robinson was asked by The Union-Tribune in 2018 about his Olympic gold medal jump, a measured and justified amount of pride underscored his response.

“The best in the world, that’s what I was,” Robinson replied.

After his retirement from professional competitions in 1979, Robinson began coaching at Mesa College where he held the position of Head Track and Field Coach for 23 years, according to The Mesa Office of Communications.

“Arnie, being a San Diegan, was able to bridge the gap with the local athletes because of his accomplishments as a Gold Medalist,” Williams said, “the students knew he was…a local product who used his athletic skills as a vehicle to achieve…academic success in the classroom.”

Robinson then retired from coaching and teaching in 2010, leaving behind a legacy of Hall of Fame inductions, gold medals, and athletic achievement in his wake.

The Mesa Press extends our sincerest condolences to Arnie Robinson’s family, friends, student-athletes, and all other loved ones whose lives have been touched or altered by his presence. He will be forever missed, both at Mesa College, as well as in the greater San Diego area.