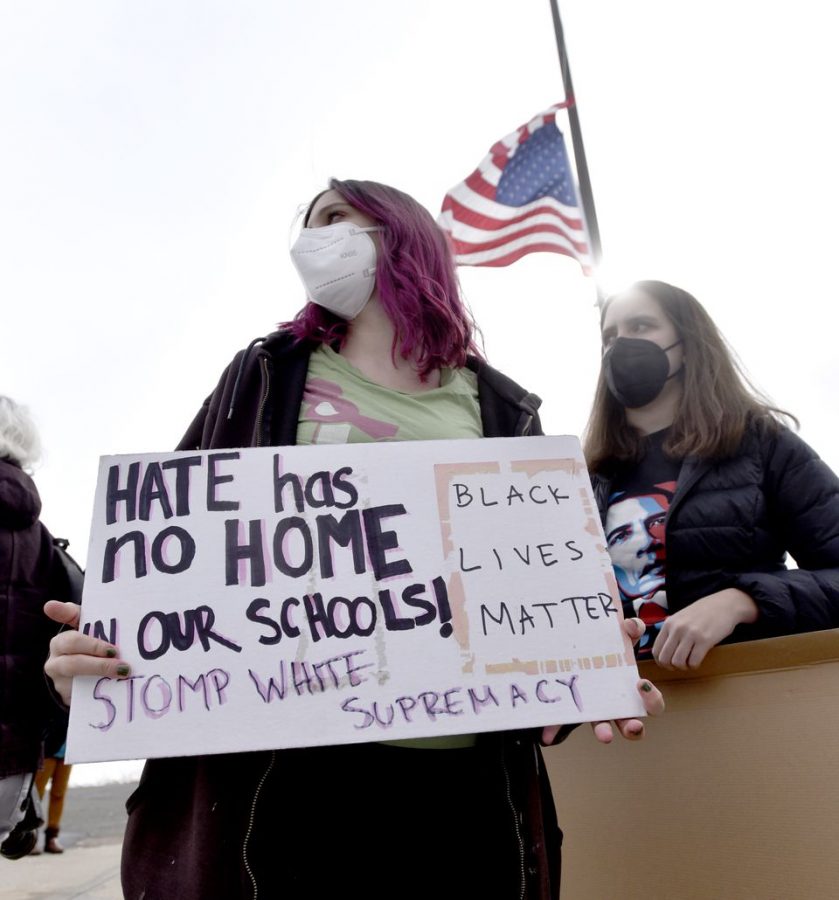 Students protesting the spread of racism and hate speech in schools.

Mesa College has experienced an uptake in xenophobic, racist, anti-Black, and anti-Asian American activity and hate speech over the course of the last couple of months.

Last month, District Chancellor Constance M. Carroll received a number of racist and threatening letters following her disavowance of the Jan. 6 insurrection at the Capitol. Since then, hateful rhetoric and harmful action have escalated in the form of Zoom bombings —  the intentional infiltration and disruption of an event via Zoom.

“[Recently], we have had what we are terming so-called Zoom bombings,” Professor of Black Studies Candace Katungi said.

This increase in disruptive and racist activity comes as three Zoom events in the last seven days have been infiltrated and interrupted by individuals who sought to cause emotional and psychological harm to participants. The Zoom bombings are being seen by many as deliberately orchestrated.

“These…were targeted and coordinated to have multiple levels of impact,” Ceaser Lopez, professor and Chair of the Chicano and Chicana Studies Department, said, “[they used] racist, anti-Semitic, anti-Black images, with the intention to cause psychological trauma.”

Professor and Chair of the Black Studies Department, Thekima Mayasa, noted that such incidences have a greater effect on students and staff than other types of disruptions.

“This was more than a moment of disruption upon our students and our faculty, this was a very specific attack and this was intended to impose greater…distress,” Mayasa began. “We [need to] recognize this has potential for lingering effects on greater instruction and learning.”

The first event that experienced this kind of action was the Feb. 17 Black History Month screening of the film “Agents of Change,” which, according to Katungi, was supposed to be “a look at the legacy and history of the Black Studies movement.” Since then, another Black History Month event was disrupted, according to Lopez. And on Feb. 23, an event hosted by the Asian Pacific Islander American Advisory Committee (APIA) titled “Uplifting the Voices of the Next Generation,” was attacked in a similar manner.

“To be clear,” Katungi stated, “the intention was to disrupt.”

Lopez noted that “this is not your run-of-the-mill bombing.”

Moreover, due to the severe nature of the racist disruptions and the “intention to cause psychological trauma,” Student Health Services have been dispatched as a means to combat any potential harm that may have been inflicted to students or faculty.

Director of Student Health Services, Suzanne Khambata, said, “Upon notice that something [was] going on, we went into crisis intervention mode and set up open forums for students, three of them on the same day, where students can come in and talk about how they feel.”

Among the “open forums,” Khambata noted that Student Health Services also offers individual sessions which are available for booking through their page on the San Diego Mesa College website, as well as the “Be Calm” seminars where participants are taught relaxation and stress reduction techniques. More events and resources are available through their webpage, according to Khambata.

At the moment it remains unclear who these “bombers” are.