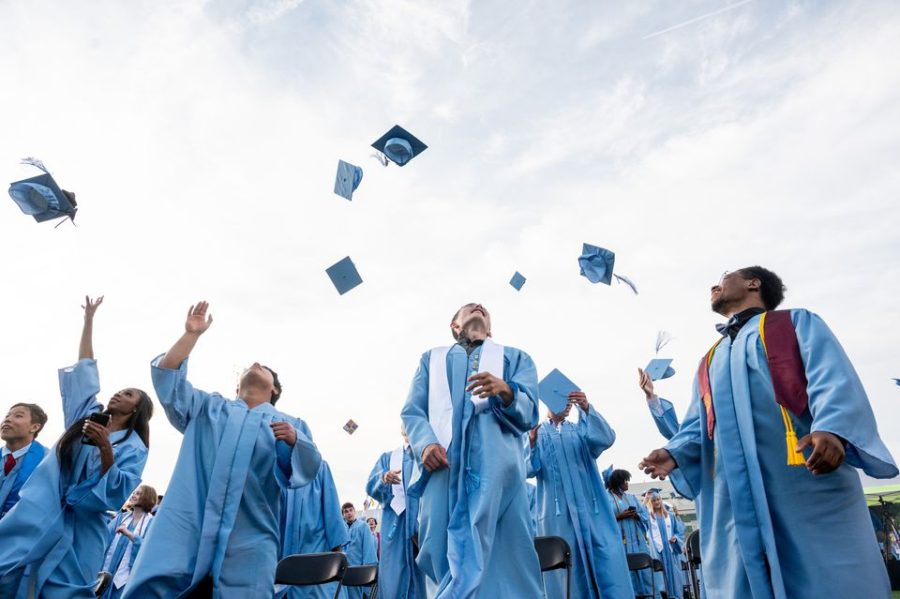 Graduates toss their caps during Skyline's Class of 2021 commencement.

The Biden administration announced last Wednesday the continuation of the Student Loan Pause through August 31. This will mark the sixth extension to the pause on student loans since it was first established at the beginning of the pandemic.

In the same statement announcing the extension, President Biden said “Analysis of recent data from the Federal Reserve suggests that millions of student loan borrowers would face significant economic hardship, and delinquencies and defaults could threaten Americans’ financial stability.”

As lawmakers look to begin progressing into a post-pandemic society and economy, the Student Loan Pause, which was established during the Trump administration to provide COVID-19 relief, has come under scrutiny by both Republican and Democrats for differing reasons. Accompanying President Biden’s announcement to continue current student loan relief, the conversation surrounding the measure has been critical. Many Democrats have spoken publicly that the current relief measures are not a viable long-term relief measure in the current economy, while Republicans have largely criticized the continued relief plan as only contributing to the inflated economy.

The Department of Education provided a report which showed that throughout Biden’s presidency, he has overseen changes which forgave over $17 billion in student loan debt. During his campaign for presidency, Biden promised to work to provide widespread debt cancellation, a move which, if successfully implemented, could cost over $1 trillion. Current reports show that complete student loan forgiveness would affect the 40 million Americans who have a collective $1.6 trillion in federal loans.

As cases surrounding the Delta and Omicron variants have slowly decreased, the Student Loan Pause has been more heavily scrutinized as legislators acknowledge an inflated economy and progression into a post-pandemic America. Democrats have scrutinized Biden’s decision to only extend forgiveness until Sept., citing the destabilization which loan repayment will cause for many Americans. Many Democratic Senators wrote in a letter to the President that “Restarting repayment will financially destabilize many borrowers and their families, and will cause hardship for many who could not afford repayment.”

Natalia Abrams, President & Founder of the Student Debt Crisis Center said that while she recognized that the extension is important to many borrowers, “President Biden’s piecemeal, short term approach is not enough to meet these challenging times.” Many of these statements from Democrats seek out longer-term legislation for student loan aid. The general Democratic perspective regarding the current Student Loan Pause views the legislation as a temporary band-aid, addressing a larger issue. This seems to mirror Biden’s promises on the campaign trail, when he advocated for complete student loan debt cancelation. White House Press Secretary, Jen Psaki addressed the President’s current silence on these promises, saying that if Congress sends the President a bill to cancel student debt, he is willing to approve it.

Republicans generally have been critical of the extension for different reasons, arguing that the funding which student loans place back into the economy is influencing the already skyrocketing gas prices and inflation currently affecting the economy. Republican Senator Mitch McConnell stated that extending the current plan is the “wrong thing to do in the middle of this overheated economy” and condemned the actions of the current administration, saying, “This administration just can’t seem to get their act together on the economy.” He also cited the lead economist for former President Barack Obama, Larry Summers, who stated that another extension is, “regressive, uncertainty creating, untargeted and inappropriate at a time when the economy is overheated.” Republicans have also introduced legislation which would work to block the pandemic as a valid reason for extensions to be approved in the future. Many have cited the $150 billion dollars which pauses have already cost taxpayers.

As conversations surrounding student loan debt have recently increased, criticism of current policies have also been highlighted. In a report by NPR, which was released last week, many administrative and technical issues surrounding current policies were exposed which work against those trying to repay their student loans. The report focused on issues surrounding the Income-Driven Repayment (IDR) plan system. IDRs are set up to assist individuals who cannot afford to make larger monthly payments and the system promises complete cancellation of debt after 20-25 years. However, the recent report reveals massive flaws in data input which can cause payments to be ignored and did not track when borrowers would qualify for cancellation. NPR, which exposed internal documents revealed that, “The documents shed new light on the 2021 revelation that, at the time, 4.4 million borrowers had been repaying for at least 20 years but only 32 had had loans canceled under IDR.”

Ultimately, these reports worked to reveal the already massively flawed system which works to execute already implemented legislation. Abby Shafroth is an attorney with the National Consumer Law Center which has repeatedly called for the reform of IDR. She explains that “It is not on borrowers to be keeping two decades’ worth of records of how their student loan payments were made and whether each payment counted towards cancellation.”

These flawed systems work to only cast more doubt on the current conversations surrounding what reform is necessary and what legislation should be implemented.