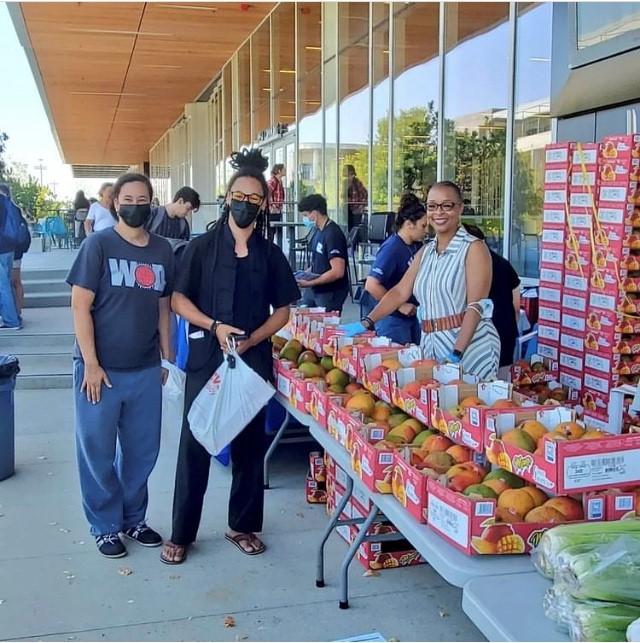 Joy and excitement fill the heart of the new Mesa College President, Dr. Ashanti Hands, now that students are back on campus. From Summer Cruise to the Olympian Olympics event, Hands says there are so many things to look forward to this year.

When students are on campus, there is the unique opportunity to get to know people face to face on a level that online learning does not provide which is why Hands says, “I love doing this work and being able to interact with people. I think there’s just an energy that we’re able to bring into a space when we’re all together.”

Through the “Listening and Learning Tour,” the Mesa College president is able to get an idea of the different opportunities and struggles of each department, which serves as a great reminder of why she does the work that she does.

Mesa College definitely chose Dr. Ashanti Hands because it is a place for everyone. Back when she worked for UC San Diego, she remembers attending a breakfast for Martin Luther King Jr. Day.  Then-SDCCD Chancellor Dr. Constance M. Carroll spoke about who the colleges served. It was that moment Hands knew Mesa College was the place to be.

“I just remember her standing up and saying I’m from the San Diego Community College District and we serve all students,” Hands said.

Growing up in Inglewood, California, near Los Angeles, also influenced Hands’ drive to make sure that all students feel welcomed and educated. She researched the problems that Black and Latinx students faced due to uncontrollable factors. According to Hands, these factors had built a wall between them and education, which is something that students should never have to face. The things that she struggled with as a student growing up in Inglewood are things that she strives to find a way around so that students do not have to face those same struggles. She wants to create an environment at Mesa where hard work is the only thing people need to succeed.

As a child, Hands’ mother saw her as someone who cared a lot about others. While attending high school, her love for others drew her toward the idea of running an after-school daycare. This idea turned into the realization that she wanted to do more. In all phases of her career, she has been doing the things she dreamed of doing for the children at the after-school program. She provides a space for everyone to participate and find who they are in the world. Hands has a unique innate hope and belief in the people she encounters – that people can do more when they have the proper tools to support them.

Inspiration is drawn from everyone she meets but the one who inspires her the most is her mom. The importance of family, community, and forgiveness comes from the lessons she learned from her mom. She believes her mom, “was my first lesson in all things glorious.” With the words “Good Trouble” written on her office walls, it serves as a reminder of the trouble she caused as a teenager when she felt there were injustices that needed to be handled at her high school. Her high school principal listened to her concerns that she had about the education of the students while secretly he had been doing the most to seek change for the school. The inspiration to make every student feel special and supported was cultivated from the experience she had with her principal. She had no idea of the support that he had given to hundreds of people, which is exactly what she hopes to carry out through her presidency at Mesa College.

When asked to give one piece of advice to the student body, Hands doesn’t stop at one because there are many things she wishes to say, some of which include to persevere, to have faith, and to know that the things you do carry meaning.  “I would tell them that they are worthy and that they can do this,” she said.