Spotlight on "Room" by Emma Donoghue 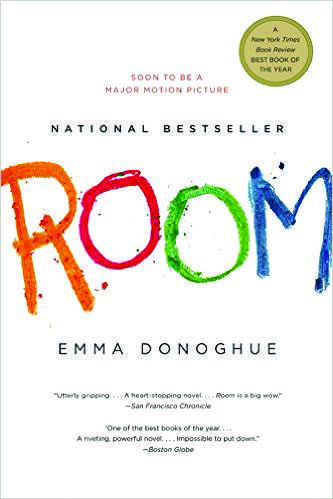 Along with every month comes many things to commemorate. According to the Healthline website, the month of April, the list includes National Child Abuse Prevention as well as Sexual Assault Awareness and Prevention. One book that deals with both of these topics is national bestseller Room by Emma Donoghue. This novel, so widely acclaimed, inspired its own film adaption, which made an imprint at this years Oscars in February.

For those that haven’t had the chance of reading Room, Donoghue delves into the mind of five year old Jack, who takes on the role of the narrator throughout the novel. From the beginning, readers learn that Jack and his mother, who he refers to as Ma, live in a small room, inside it all the basic necessities a human would need to survive.

Readers see the dynamic between Ma and Jack, as it is very close and on first impression very sweet. It seems refreshing to see such a tight relationship between a mother and son. Jack’s voice is so engaging and lovable that it is so easy to picture this five year old boy playing with his toys or asking his Ma all sorts of questions. In a way it is almost picturesque, the rituals they have and the home they seem to have built.

However, soon the audience is introduced to a man by the name of Old Nick, and discover the secret that Ma has not let Jack in on. To Jack, Old Nick is a man who gives them food and toys and spends nights with his Ma in bed sometimes. To Ma, and now the readers, Old Nick is one of the most vile types of a human being there is: a predator in every sense of the word.

Once this altering discovery occurs, Ma becomes more of a hero in the eyes of the reader. One can see that even though they’re held captive, the home they share together is one she built out of love for her son, with a sheer desire to protect him from all things bad. Still a young woman herself, she teaches Jack all that she can, while at the same time striving to make sure that the feeling of fear she is so familiar with is not one that her son gets to know as well.

Without giving too much away to those who have not read the novel, or seen the film adaption, the scenes soon change, revealing new characters and new circumstances for both Ma and Jack. The events that occur keep the reader so engaged from beginning to end as they experience a whirlwind of emotion through the eyes of such a confused young boy.

The nominations for the movie consisted of Best Picture, Directing, Writing (Adapted Screenplay) and Best Actress in a Leading Role, which Brie Larson won for her role as Ma.

Donoghue creates a world within Room that a lot of people cannot even begin to imagine, but through Jack’s narration and his emotion, the audience can almost feel the confusion and fright as his world changes, but most of all love can feel the love and respect he has for his mother. It cannot by easy to write in such young and naive dialogue, but Donoghue makes it look too easy.