Clean up on aisle COVID 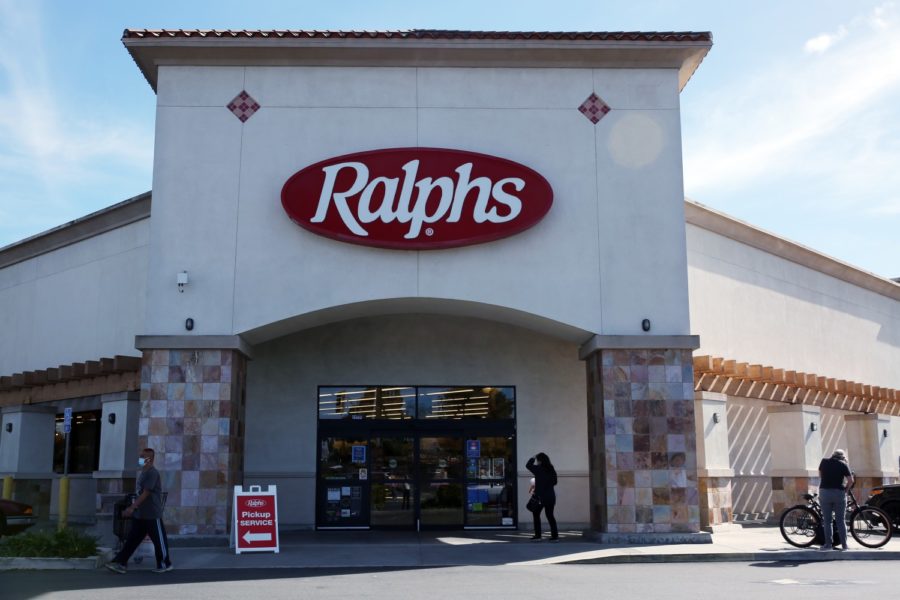 LONG BEACH, CA - FEBRUARY 02: People enter and exit a Ralphs store which Kroger, its parent company will shut down in response to the city imposing a "hero pay" increase of 4 dollars per house in on Tuesday, Feb. 2, 2021 in Long Beach, CA. The Ralphs is located at 3380 N. Los Coyotes Diagonal. (Dania Maxwell / Los Angeles Times)

Since April of 2020, I knew things in the world around us were going to change drastically. At the start of the pandemic, it was a depressing time in the world watching stores and restaurants close, people wearing masks and living in constant fear of the unknown of the virus. Working at a grocery store during the pandemic felt very off for a variety of different reasons.

One example is that all of the shelves were empty due to the number of products that were being panic-bought. Paper towels, toilet paper, hand sanitizer and disinfectant spray were just some of the items that were always out of stock. Normally, I am used to walking down the aisles with all of these products on the shelves.

Another example during the first few months of the pandemic, Ralphs stores were pretty empty due to the restriction on the number of people who can be in the store. Normally on the weekends, the Mission Valley Ralphs was always packed with customers doing their daily shopping. Now it seems like things are starting to feel normal again like previous experiences at the grocery store before COVID-19. For the past few months, the number of people allowed in the store is starting to return to its normal capacity.

During that dark period, I worked at Ralphs Food and Drugstore in San Diego in the Clicklist department. Clicklist is an online shopping pickup service that Ralphs offers to its customers. Being in Clicklist at that time was difficult for me due to the high volume of customer orders that had to be done. Before the pandemic, the store would only get 10 orders a day, but once COVID-19 came into the picture, the store would average about 80-100 orders a day. That big jump in orders really took a toll on everyone in the department. It took an extended amount of time to hire enough people to fulfill those orders.

My personal experience working at Ralphs during the pandemic is one I will never forget. Tensions were always high due to the lack of preparation as well as terrible leadership by the company and by store management. Viewing things from a business perspective, I can understand that the company had to make some tough decisions but there were definitely situations that could have been handled better. For example, the store management makes me feel worthless and makes me feel like I am not supposed to have a life outside of work. For months during the pandemic, department managers, full-time employees and some part-time workers were working six days a week. Some are even working six to ten days in a row without a day off. As an employee, it feels like the management never appreciates the hard work and sacrifice the employees made for the store during the pandemic. In the two years I have worked at Ralphs, I have never heard management ever once thank me for the work I do for the store.

Another example of terrible leadership by Ralphs is them cutting hours in particular times throughout months of the pandemic even though the company is making billions of dollars from this pandemic. I found it very frustrating because you would think a company that is owned by Kroger, a billion-dollar grocery chain, wouldn’t shy away from adding hours to fulfill the tasks this job requires, but this goes to show you that even a company like Ralphs can be greedy to its employees. I also thought it was disappointing because it makes employees’ lives like mine harder to make ends meet financially.

My last issue with the Ralphs I work at, is that for a majority of the pandemic they were never strict on enforcing a limit on how many people that are allowed in the store at once. At the beginning of the pandemic the store would only allow as few as thirty to forty people in the store, but as the weeks went by the store realized they were losing money with the limitations so they ended up getting rid of it entirely. Other stores like Target, Costco and Walmart were still restricting the number of customers allowed in their stores. Even when San Diego County was in the purple tier, Ralphs was only supposed to have a 25% capacity limit but every weekend it felt like the whole store was packed and people were shoulder to shoulder with little to no social distancing. Working in that type of environment was really difficult for me because I was always afraid that I was going to get COVID-19; it impacted not just me personally but my work from getting completed. In some cases, I would wait for customers to clear an area so I could complete a task.

Overall, when the COVID-19 pandemic began nobody knew the effect it would have on our day-to-day lives. Looking back now, it makes me realize how many things we took for granted including our daily routines at our jobs.