Too sensitive or too ignorant? The rise of political correctness in the US 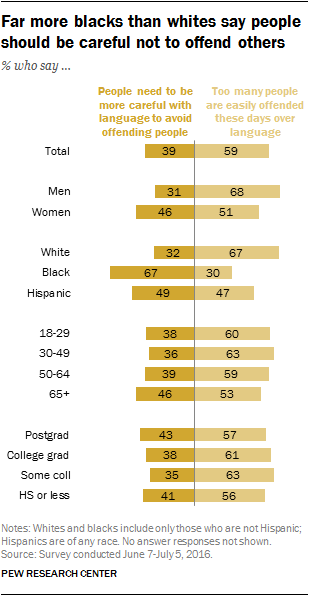 A positive shift in cultural sensitivity is leading some to believe that American's are becoming too sensitive.

People are beginning to call out racism, sexist and insensitive comments, and cultural appropriation, leading some people to believe that society is becoming too sensitive.

If you truly believe that society is becoming too sensitive, ask yourself why. Is it because people are choosing to question things more, rather than blindly following societal norms? Are people being sensitive or have you not educated yourself enough on cultures other than your own?

In 2015, during a rally in South Carolina, presidential candidate Donald Trump mocked disabled reporter Serge Kovaleski on live TV, by mimicking Kovaleski’s small hand, a common side effect of his Arthrogryposis, a condition that affects the joints. If a man who is running for President of the United States is comfortable enough to behave that way, we as a country need to look inward and see where we’ve gone wrong.

It was clear that the main reason people believed the world was becoming overly sensitive was because their ideas of humor, the way they talked about others, and their belief systems was being challenged. It is important to recognize that America is not far removed from a very oppressive time in its history. We have not reached some utopic, peaceful place in time where the idea of oppression, and racism is so far-fetched, that people can look back and laugh about it.

Let’s talk about jokes. Society is not becoming soft because people can’t take a joke anymore. People are now beginning to consider the implications, and underlying message of these so-called jokes. In 2014, Fox News host Eric Bolling was crucified after making a “boobs on the ground” remark, a poorly done wordplay for “boots on the ground,” in reference to Mariam Al Mansouri, the first female Emirati Air Force fighter pilot. Not only does that comment reek of misogyny, but it sexualizes her and reduces her accomplishments to nothing. So of course women are not dying to hear more oppressive, sexist “jokes” that set them back. Of course, people could laugh at these jokes and “not take them too seriously,” but no longer are the days where we accept ignorance and misogyny as the norm.

Some people in this country fail to realize that racism and ignorance about racism has, and will continue to have considerable negative implications in society. Blackface, for example, is completely unacceptable. Jimmy Kimmel and several other comedians learned this the hard way, as they ended up on the chopping block in 2020, for using blackface as a comedic tool. Let me tell you, I know a good joke when I see one, and that doesn’t hit the mark. Insensitivity and plain stupidity put these people in the spotlight for incidents like this. Calling these celebrities out and watching them squirm as they have to explain themselves, is 100% necessary in creating a cultural change.

A math teacher in Riverside, CA came under fire when she was caught on camera wearing a makeshift headdress and jumping around her classroom, pretending to pray to the “rock god,” and doing tomahawk chops, a reference to scalping, in front of her high school class. She clearly did not see anything wrong with what she did, and that’s exactly the problem. It was insensitive, it was ridiculous, it was unnecessary and mostly it was profoundly ignorant. She made a mockery of a group of people who have suffered tremendously on this very land we stand on today, and a rich history that should be respected.

Another major reason for the divide between people who believe the world is becoming sensitive, and everyone else, is education, or lack thereof. People are seeing this cultural shift as a personal attack on them and their beliefs, which in some cases it may be. There is an unspoken social contract among people, and everyone has the responsibility to want to do better. We are all cohabitating on this planet, and in this country specifically, and the key to harmony is respect. The goal of this social movement is to ensure that everyone, especially ones who have suffered through oppression, prejudice and systemic disadvantages, are being treated equally and with respect and dignity.