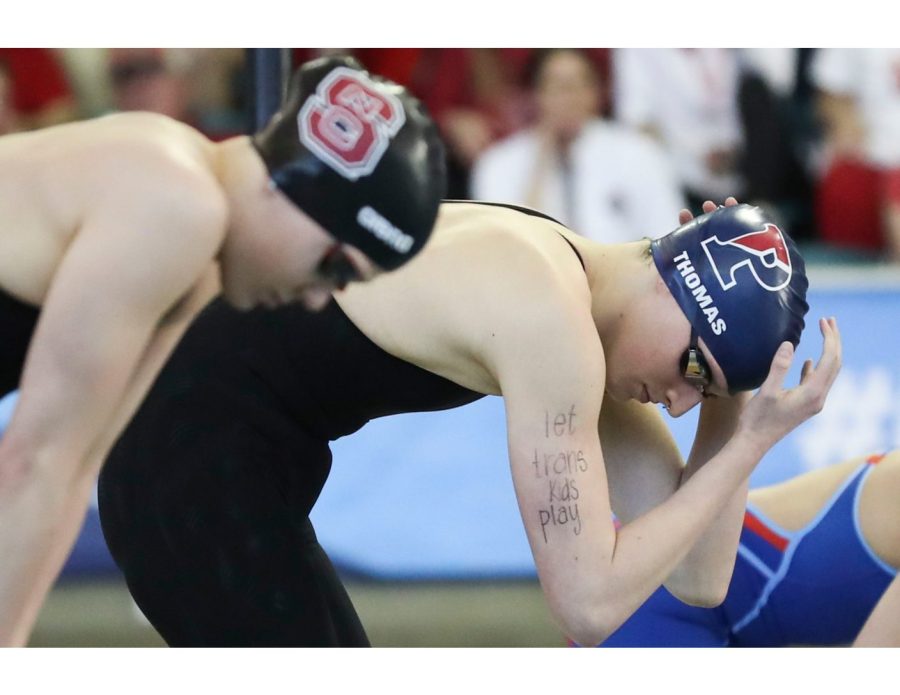 Some sort of solution is necessary because as of now the world is blowing up.

Lia Thomas swam for University of Pennsylvania on the men’s team for three years, prior to transitioning into a woman during the COVID-19 pandemic. There has been much controversy in regards to her eligibility in competing against women because of fairness.

As of right now the NCAA is undergoing heat by the people because they believe that it is ‘unfair’ for Thomas to compete under the women’s category. According to “Insider,” her own teammate, who remained to keep her identity anonymous, said that she supports Lia’s transition; however, she too feels that she shouldn’t be competing under the women’s category due to the same issue. In regards to this, the LGBTQ Community, transgender men and women should be supported; however, where does the line cut when it comes to sports? What is fair? Let’s take a step back and look at why we have separate categories in sports such as men, women, disabled, etc.

According to “The New Yorker,” and “LiveScience” men who have gone through puberty are proven to have more cardiovascular capacity, greater muscle mass, higher tendon mechanical strength, and denser bones. They tend to be stronger and taller, with longer wingspans, and not just in swimming. In many sports there is a dramatic difference between men and women’s world records: men are faster. Men have testosterone which is put into steroids because they can improve their performance and that is something men naturally produce and produce fifteen times more than women. With that being said, even if one were to reverse it by taking estrogen can’t change the fact they had already gone through male puberty between ages 9 to 16.

In the article, “Sex differences in youth elite swimming” by the national library of medicine, they conducted some experiments. In one of their studies they found that “Using ‘big data’ as a proxy to estimate the ergogenic advantage of androgens in boys compared to girls, we determined the age of the sex-related divergence in elite swimming performance. As expected, boys had faster swimming performance than girls at 18 years in sprint and endurance distances.” In conclusion they found that, “These data suggest that endogenous testosterone explains 98% of the variance of the sex difference in performance, and support the previous assertion that the sex difference in circulating testosterone of adults explains most of the sex difference in sporting performance”. On a recent interview with the Nelk Boys, Caitlyn Jenner, a retired former olympic athlete who transitioned at the age of 65, was the guest on their show. She had many things to say about how they should make different rules because she thought that it was completely unfair for Thomas to be swimming on the women’s team.

There are many statistical differences between the men and women categories. According to “The New Yorker,” and their article, “The Trans Swimmer Who Won Too Much,” men are about 10 to 12% faster than women. Physically even when undergoing a hormone to transition into a woman, there is going to be a difference in performance, but those hormones don’t change their bone density, their larger lungs, or how long their bones are. With that being said, the NCAA as of now requires two years of hormones in order to compete where Thomas has followed and did this legally and is eligible; however, has not yet fully transitioned.

The controversy comes into play with women who have been working hard to earn their spot, and place in the olympics and have been compromised and crushed. Due to this, currently, there are a lot of people who aren’t happy and they are waiting for the NCAA to start taking action which is the reality at the moment. With that being said, no one could say what they can or can’t do with their bodies,  Thomas should be supported and accommodated nonetheless. However, a solution to solve this controversy due to overwhelming responses from some people is expected. Whatever that may be, there needs to be some sort of accommodations on both parties.