Mesa Baseball wins one, loses one

Mesa Baseball loses first game against Barstow, but turns the tide around and comes out winning after a double header 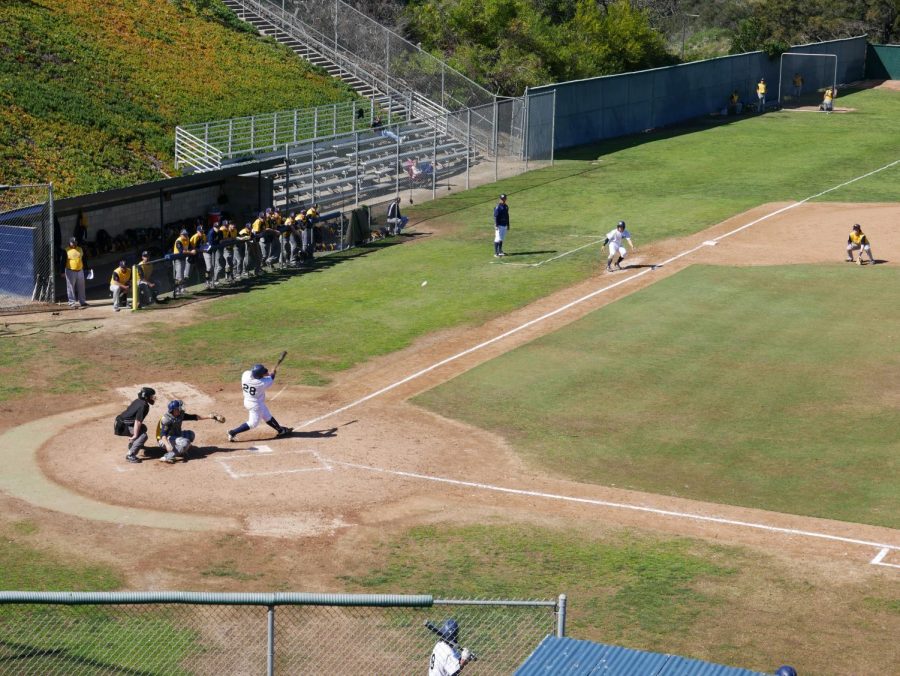 The Mesa College baseball team faced a tough doubleheader at home on, Feb. 24 against the Barstow Community College Vikings. Barstow won the first game at the top of the ninth inning 8-5, but not before the Olympians answered right back with a 7-1 win. The Olympians currently stand at 5-6-1.

After a week of continuous rain, the sunshine shined prominently on Saturday to let the doubleheader begin. Although sunny, some of the fans were chased away by the chilly wind that cut straight through jackets, although most stayed to support their Olympians. This windy atmosphere made pop fly balls fall erratically back down to the field.

The first game saw almost no action from the batters until the fourth inning, in which Barstow put two runs on the board, then another four runs in the sixth inning. Barstow scored another in the seventh inning. Mesa finally crossed the home plate with their runners in the seventh inning, having 5 hits during that inning and ending the bottom of the seventh with a double play. The game ended at the top of the ninth inning with a strike and the score  at 8-5 Barstow.

With a small break in between, Mesa quickly shook off the loss and began to get ready for the second game with Barstow. After some practice drills run across right field, Mesa headed to the field and the dugout as Barstow took the first at bat. Douglas Hall, was the starting pitcher. After some great in-fielding, during the top of the first and second inning, Mesa scored, with the first RBI of the game driven home by Jacob Engel. The second inning ended with a strikeout, with bases loaded, but still gave the lead to the Olympians 2-0. The top of the third inning ended with the bases loaded for Barstow, but Mesa was able to hold the gates and Barstow did not score.

At the bottom of the third inning, Mesa’s own Jonathon Soto, catcher, stole second right under from Barstow’s noses, putting him in scoring position, which Barstow would later pay for. With the wind howling, No. 5, Raymundo Gutierrez, infielder, hit a pop fly off to right field. Barstow’s right fielder lost the ball in the sky, in between the wind and the sun, sending Soto in to score. That was an error for Barstow.

One of the highlights of the game happened at the top of the fourth inning, when the Mesa shortstop Victor Ceniceros caught a nasty bullet with his bare hand. The ball came whizzing from the Barstow bat toward the center of the diamond, near second base, when Ceniceros grabbed it barehanded.

“All I saw was the ball hit the mound, and as soon it bounced, it kicked to my right,” said Ceniceros regarding the catch. He continued, “It was a quick reaction.” Those cat-like reflexes paid off as he set his feet down and threw the ball to first for the out. Barstow did score their only run that inning, putting the score at 3-1 Mesa at the top of the fourth inning. In an attempt to seal the faith of the game, Mesa coaches and players did a phenomenal job at playing scrappy baseball in the sixth inning, scoring another 4 runs, through bunts and singles. The game ended on a double play, 7-1 Mesa.

In an interview after the game, Ceniceros said, “Unfortunately we lost the first game, but we took a 30 minute break, got our mindset in the right place. Ended up with the win.” Ceniceros said it was critical, adding, “Forgetting about the first game, and focusing on the next game. Taking it one pitch at a time, control what you can control, and keep pushing until the last out. The fact that we were able to change our mindset in 30 minutes was incredible, and we came out with a win.”

The next time you can support Mesa Baseball at home will be Thursday, Feb. 28, at 2 p.m. against College of the Desert. Go Mesa!